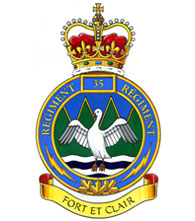 35 Signal Regiment is a Primary Reserve unit of the Canadian Armed Forces and is a member of 35 Canadian Brigade Group. It was created in 2013 from the unification of 713 (Beauport) Communication Regiment and 714 (Sherbrooke) Communication Squadron.

In April 1920, a communications unit was created in Quebec City: the No. 5 Signal Company took up residence in the Beauport Armoury. The unit quickly acquired a remarkably high level of performance. Just one year after its creation, it was asked to help keep the peace in Turkey. In 1926, the unit, which, up to that point, had been led by an infantry officer, came under the direction of a communications officer for the first time. In 1939, No. 5 District Signals was called on to serve with the Regular Force to prepare for what would become World War II.

The origins of 714 (Sherbrooke) Communication Squadron, for its part, date back to 1963 in the Eastern Townships, when the order was received to create a signal squadron in the Neuvième Groupe de Milice. The core founding squadron members came from various units of the Neuvième Groupe de Milice. A number of them were from the Fusiliers de Sherbrooke’s company of signallers (C Company). The first officers were from the 7/11th Hussars of Windsor, 72nd Battery of Coaticook and the Sherbrooke cadet corps. Other non-commissioned officers came from the Regular Force to help the founding group get the unit off the ground. It was named 14th Independent Signal Squadron.

Shortly thereafter, in 1970, the Beauport unit dropped the name 3rd Independent Signal Squadron and adopted the name 713 Communication Squadron, thereby also undergoing a major change in vocation as its focus shifted from strategic communications (at the headquarters level) to tactical communications (on the ground).