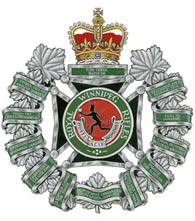 Named by the enemy in battle

The Royal Winnipeg Rifles are a Reserve Force Infantry unit located in Winnipeg, MB, part of 38 Canadian Brigade Group. As an Infantry Battalion the Royal Winnipeg Rifles are the heart of any combat force. With a storied history dating back to 1883, the Rifles have been a proud part of Canada’s military tradition, a tradition we carry on to this day.

The Royal Winnipeg Rifles are classified as Light Infantry. The men and women of the Rifles are trained to be proficient in a wide range of small arms weapon systems, specializing in dismounted offensive and defensive operations. In addition to these skills members of the Rifles receive training and leadership, teamwork, planning and coordination. The role of the Infantry is never an easy one – operating in all weather conditions and terrains the soldier of the Royal Winnipeg Rifles always achieve their goals. Whether helping Canadians at home fight against floods fires and blizzards, or helping Canada achieve its goals abroad, the work of a soldier is never done.

In the post-WW II period, the unit provided volunteers for the 27th Infantry Brigade in Germany, as well as for various peacekeeping operations. The unit celebrated it’s 125th anniversary in 2008 with a parade down Main Street to the Winnipeg City Hall and a formal dinner at Minto Armouries. Three members of the unit won the Victoria Cross, all during the First World War: Colour-Sergeant Frederick Hall, Sergeant Alex Brereton, and Sergeant Frederick Coppins. Some famous Canadians have served in the ranks of the regiment, including Hugh John MacDonald, (son of the first Prime Minister of Canada); Cliff Chadderton, the founder of the War Amps of Canada; and Senator Gildas Molgat, Speaker of the Senate from 1994 to 2001. The unit has a total of 47 battle honours and is the 28th infantry regiment in the order of precedence of reserve units. The Regimental quick march is “Pork, Beans, and Hardtack”, and the Regimental double march is “Old Solomon Levi”. The Regiment still maintains such Rifle traditions as referring to “swords” instead of “bayonets”, marching at 140 paces per minute, and maintains other variations in drill and dress that are unique to Rifle regiments. Additionally, the unit does not have Regimental Colours; instead, the unit’s Battle Honours are emblazoned on the Cap Badge and on the Drums. When the corps of drums is on parade, it is escorted and receives compliments in the same way as for the colours of a line regiment.

Beginning in the late 1980’s, many individual members of the Regiment participated in UN and NATO missions in Cyprus, Croatia, Bosnia-Herzegovina, Southwest Asia and Afghanistan. In 2006, five soldiers of the Regiment deployed to Afghanistan. Closer to home, the Royal Winnipeg Rifles have contributed to emergency aid to the civil power efforts, and have been tasked with a secondary role as one of four Arctic Response Company Groups, formed in 2009.