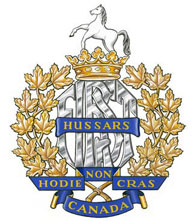 The 1st Hussars is a Primary Reserve Armoured Reconnaissance Regiment of the Canadian Army. As part of 31 Canadian Brigade Group, the Regiment is based in London and Sarnia and provides the Brigade with highly motivated and trained armoured crewmen. The 1st Hussars has a long and storied history that includes the D-Day landings as well as more recent peacekeeping operations and support to the Afghan mission.

The 1st Hussars was founded in 1856 with the formation of the First London Volunteer Troop of Cavalry. Through the amalgamation of several troops in southwestern Ontario, the 1st Regiment of Cavalry was formed on 29 May 1872. In April 1892 the Regiment was redesignated the First Hussars and thus became the Canadian Cavalry Regiment which has held its name longer than any other.

During the South African War, the Regiment contributed officers and men to the Canadian contingent and was awarded the Battle Honour, South Africa 1900.