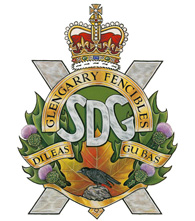 The Stormont, Dundas and Glengarry Highlanders is a Reserve Infantry Regiment based in Cornwall, ON. We employ members from across the local communities and a large portion of Eastern Ontario. People choose to become a reserve soldier to learn new skills, gain valuable experience, meet new people, and serve their country.

Infantry Reservists are physically fit, resilient, and motivated to learn new skills. They learn to function as part of a team, and excel as individuals. A reservist balances their military duties with other commitments such civilian careers, studies, and family.

A new member of the SD&G Highlanders will learn to:

Although they are not obligated, many reservists choose to deploy on missions abroad or within Canada to aid communities during states of emergency. Reservists are never forced to permanently relocate for work.

For detailed information for our non-infantry occupations, contact our recruiter.

The Stormont, Dundas and Glengarry Highlanders trace their origins to the militias formed in the late eighteenth century in what are now the counties of Stormont, Dundas, and Glengarry. During the War of 1812, the militia regiments perpetuated by the Stormont, Dundas and Glengarry Highlanders distinguished themselves at the battles of Crysler’s Farm, Ogdensburg, Sacket’s Harbor, Lundy’s Lane, and many engagements along the St. Lawrence frontier. They carry three battle honours that were awarded on the occasion of the bicentennial of the War of 1812 in recognition of their service. These battle honours are: CRYSLER’S FARM; NIAGARA; and DEFENCE OF CANADA, 1812-1815.

The units perpetuated by the Stormont, Dundas and Glengarry Highlanders also served in Upper and Lower Canada during the Rebellion of 1837-1838, the Fenian Raids of 1870 and later contributed men to the Canadian contingent for the South African War. They also served with distinction in Canada and in Europe during the First World War, earning six battle honours.

During the early days of the Second World War, the Stormont, Dundas and Glengarry Highlanders served at home, guarding the St. Lawrence canals before being mobilized for overseas service in 1940. They landed in Normandy on D-Day on June 6, 1944, and were the first Allied regiment to enter Caen on July 9th. By the war’s end, the regiment had suffered 278 killed and 781 wounded, while earning a further nineteen battle honours.

The Stormont, Dundas and Glengarry Highlanders is a part-time reserve infantry unit that maintains a vital link to the community of Cornwall and the surrounding counties; provides support to the defence and security of Canada when called upon; and promotes the values and ethos of service to country. Members of the regiment, on a voluntary basis, have deployed on operations in Canada, such as the Ice Storm of 1998 and the G8/G20 in 2010, and across the world including Germany, Egypt, Cyprus, Somalia, Bosnia, Croatia, Macedonia, Sudan, the Democratic Republic of Congo and Afghanistan.

Read more of our unit history.