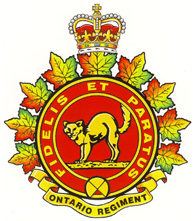 The Ontario Regiment (RCAC) is one of the oldest continuously serving regiments in Canada and one of the senior armoured regiments. Militia units have existed in what is now the Region of Durham since the earliest days of the 19th century.

In 1856, A Highland Rifle Company was raised by Captain James Wallace, in Whitby, and became Number 6 Company of the 2nd Battalion, volunteer Militia Rifles of Canada, later named "The Queen's Own Rifles of Toronto" in April 1860. During the period of national tension that gripped Canada in the early 1860's, other volunteer militia infantry companies were formed in Ontario County. In 1862, two formed in Oshawa, two in Whitby and one each in Prince Albert, Greenwood, Uxbridge, Columbus and Brooklin. Many men were mobilized for service during the tensions of 1864-1866, when Fenian invaders massed south of the Niagara Frontier. The Oshawa Rifle Company took part in the Battle of Ridgeway, in June 1866, as part of a Provisional Battalion of Ontario Infantry.