The Princess of Wales' Own Regiment 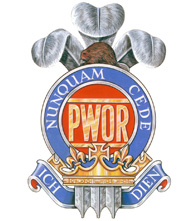 The Princess of Wales’ Own Regiment (PWOR) has served Kingston for over 150 years, and was a major contributor of people and resources to the aid, defense and interests of Canada during major and minor historical events during the late 1800s and throughout the 1900s.

Today, the PWOR continues to hire, train and develop Reservists so that they can volunteer to deploy and make a difference in the modern-day world. You too can join with and train with Kingston’s Infantry Regiment, so that the Canadian Forces can continue to:

Join the Canadian Army.
We are Strong. We are Proud. We are Ready.

The regiment was created on January 16, 1863 as the 14th battalion Volunteer Militia Rifles of Canada from the amalgamation of Kingston’s seven independent rifle companies. Shortly after the wedding of the Prince of Wales (later Edward VII) to Princess Alexandra of Denmark, the regiment asked for and was given permission to become The Princess of Wales’ Own Regiment.

During the Fenian Raids of 1864 and 1866, when Irish extremists attempted to bring Britain to her knees by attacking Canada, the regiment was called to active duty, both to Niagara and later to Cornwall. The band mace presented to the regiment by its officers “IN REMEMBERANCE OF CORNWALL” is in the regimental museum.