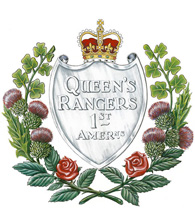 "Mindful of our ancient valour"

The Queen's York Rangers is a reserve armoured reconnaissance regiment with squadrons in Toronto and Aurora. As recce, the Regiment scouts the advance, provides screens and observation posts, escorts convoys, and has a Quick Reaction Force to deal with threats. The Regiment conducts reconnaissance both mounted in vehicles and dismounted on foot.

The Rangers traces its history back to the Seven Years War when Robert Rogers raised the Queen’s Rangers to defend British North America against the French and their Indigenous Allies in the 1750s. The Rangers also fought against the Americans during the War of Independence, defeating General George Washington at the Battle of Brandywine in 1777. Later, the unit founded Toronto (1790s) and fought alongside Indigenous Allies in the War of 1812. The Rangers also deployed during the North West Rebellion (1880s) and The Great War (1914-18).

The Queen’s York Rangers endeavour to establish deeper ties to the large Indigenous community in Toronto. The Regiment is looking for bold and intelligent men and women of all backgrounds to join their ranks.

The story of the Queen's York Rangers begins in the remote days of the Seven Years War, when companies raised by Robert Rogers served the British in raids along the frontiers of French Canada. Trained in woodcraft, scouting, and irregular warfare, units like Rogers' Rangers finally gave the red-coated British regulars an effective weapon against the guerrilla tactics of French-Canadian habitants and their Indian allies, enabling them to beat the enemy at his own game.

Raised anew among British Loyalists for the American War of Independence, renamed the Queen’s Rangers and now including five troops of cavalry, the green-clad Rangers fought on the side of those loyal to the British Crown. Under the command of John Graves Simcoe, the regiment fought in almost every theatre of war and earned, as the premier Loyalist unit, the title 1st American Regiment. They were never defeated in battle but obliged to join the final British surrender at Yorktown in 1781. The regiment’s colours from this period are now proudly on display in the unit's officers' mess.