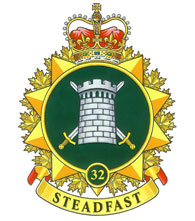 The Brigade Headquarters, located in Toronto, Ontario, is a full time unit staffed 8:00 a.m. to 4:00 p.m., Monday through Friday. In addition, staff will work evenings or weekends as required by their duties. The Brigade’s Reserve units have small full time staffs that work throughout the week. Training hours for the part-time Reserve training conducted by each unit is detailed on the unit pages linked below.

32 Canadian Brigade Group (32 CBG) is an Army Reserve Formation of the 4th Canadian Division and is headquartered in Toronto, Ontario.

The basic mission of 32 CBG is to generate well trained Reserve soldiers to enhance Canada’s combat capability. Like all Reserve brigades and units, it recruits and trains part-time soldiers to provide the basis of national mobilization, to augment the Regular Force in deployments overseas and throughout Canada, and to act as the military’s link to the community. Apart from sending a steady stream of soldiers to missions overseas, the Brigade's main operational role is to be prepared to lead the military response to any natural disaster occurring in the GTA. For this role, the Brigade deploys an organization called 32 Territorial Battalion Group. For its training in war-fighting, whether in the field or in computer-assisted exercises, the brigade is configured as 32 Battle Group.

32 CBG is made up of part-time soldiers plus a small cadre of soldiers from the Regular Force who help plan and execute the training. On average, the part-time soldiers train one night a week and one weekend a month. Many Reservists take time off school or their civilian work to train full-time in the summer.

Many soldiers of 32 Canadian Brigade Group have served on operations around the world. Since the late 1980s, nearly 1,000 individuals from the Brigade have deployed with NATO, the United Nations and various coalitions to operations ranging from Cyprus, Cambodia, the Sudan and Sierra Leone to the peace-support and combat operations of the Balkans and Afghanistan. More than 500 soldiers of the Brigade's units in the war in Afghanistan.

The Brigade has also played a big role in disaster relief at home, helping Canadians during the Manitoba floods and the January 1998 ice storm. Several hundred soldiers of the Brigade were involved with the G8/G20 Summits and, in August of 2010, provided the land component of the national sovereignty operation on the Northwest Passage called Operation NANOOK. In the past few years, 32 CBG’s soldiers have served in Iraq and Eastern Europe. Most recently, members of 32 CBG deployed in Ontario (Muskoka and the Ottawa Valley) responding to flooding during the spring of 2019.

32 Canadian Brigade Group (32 CBG) is the current name for the military presence in Toronto that dates back to the 1790’s when The Queen’s York Rangers built the city’s initial buildings and roads. Since these beginnings, 32 CBG regiments have served in all military campaigns involving Canadians. From the War of 1812 and the defence of York (now Toronto) in 1813, to current conflicts in Afghanistan and the Middle East, Torontonians have served the military and, at times, defended their own soil.

The Fenian Raids on Ontario mounted from the United States, between 1866 and 1871, were repelled by the battalions of volunteers, many of whom were Torontonians. Later, several Militia battalions from the Toronto area were quickly mobilized for the Northwest campaign and sent west in 1885. When the South African War began in 1899, specially formed units of volunteers (mostly from Militia units) were dispatched from Toronto.

By the time of the First World War, the Canadian army — still mostly Militia, with a small permanent force to train them — included all of the logistical and other support units it needed to become an independent field force. The Militia was given the task in 1914 of raising the hundreds of thousands of men who would fill the new numbered battalions of the Canadian Expeditionary Force. Many said their last goodbyes on the platform of Summerhill Station, then the North Toronto Railway Station. When these battalions were disbanded at the end of the war, the Toronto regiments that had provided the soldiers inherited Battle Honours that included such resounding victories as Vimy and Amiens.

For the Second World War, existing regiments were mobilized and grouped into divisions for service overseas. The 48th Highlanders of Canada fought through Sicily and Italy before joining the push into Holland and Germany; the Royal Regiment of Canada was nearly destroyed at Dieppe before returning to France in 1944; the Queen’s Own Rifles of Canada landed in Normandy on D-Day, liberated the first building in France, and fought all the way to the Rhine. In one theatre or another, every unit of this Brigade was involved in the war.

Since then, many soldiers of 32 Canadian Brigade Group have served on operations around the world. Since the late 1980s, nearly 1,000 individuals from the Brigade have deployed with NATO, the United Nations and various coalitions on operations ranging from Cyprus, Cambodia, the Sudan and Sierra Leone to the peace-support and combat operations of the Balkans and Afghanistan. More than 100 soldiers of the Brigade's units returned from Kandahar just before Christmas of 2010.

The Brigade has also played a big role in disaster relief at home, responding to emergencies since 1793. You may remember soldiers helping Canadians during the Manitoba floods and the January 1998 ice storm. 32 CBG helped dig out the City during the Toronto Snowstorm of 1999. Several hundred soldiers of the Brigade were involved with the G8/G20 Summits guarding critical infrastructure and, in August of 2010, provided the land component for national sovereignty operations in the Northwest Passage. Armouries in the downtown core have opened to the homeless as temporary emergency shelters in 1996, 1998, 1999, 2004, and over this winter of 2017-18.

More recently, 100 soldiers from 32 Brigade lent their assistance in battling the elements with the 2017 British Columbia wildfires and Quebec/Eastern Ontario floods. From around the globe to here at home, 32 Canadian Brigade Group remains ready to support the citizens of Canada whenever needed.