The Royal Highland Fusiliers of Canada 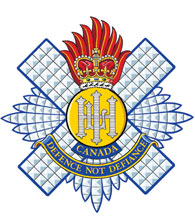 The mission task for our unit is: Mortars – A platoon of 50 members, which is trained in the employment of two groups of four 81-millimetre mortar tubes to provide tactical medium mortar indirect fire support to a manoeuvring battle group.

The Royal Highland Fusiliers of Canada is a Reserve unit from the Canadian Forces 31 Canadian Brigade Group. With companies in Cambridge and Kitchener, the unit is a unique element of the Canadian Forces, whose task is to augment Canada’s military by providing Primary Reserve Infantry soldiers.

One of Canada’s oldest infantry regiments, The Royal Highland Fusiliers of Canada became part of the fabric of Waterloo Region when a company of unarmed Mennonite teamsters hauled supplies during the War of 1812. During the First World War, 3,763 volunteers from Waterloo County served in the regiment, more than 100 of whom were decorated for valour. Early in the War the unit was separated into two regiments and renamed the 29th Waterloo (Galt) and the 108th (Kitchener). In 1915 they re-merged and became three battalions of the Canadian Expeditionary Force (CEF), the 34th, 111th and 118th.

Post war, separation again occurred with the Galt members becoming the Highland Light Infantry of Canada (HLI of C); the Kitchener-Waterloo members became the North Waterloo Regiment, and later, the Scots Fusiliers of Canada (SF of C). In 1940, the HLI of C mobilized for the Second World War and the Scots Fusiliers were integrated into the regiment. On D-Day, June 6, 1944, the HLI of C landed on Juno Beach, Normandy. On July 8th, the HLI of C led a successful but most bloody operation in capturing the Normandy village of Buron. Of the unit’s 600 members taking part in the fierce day-long battle, 193 were wounded and 70 were killed or subsequently died of their wounds.

During the two World Wars, the HLI of C was awarded 28 battle honours of which 18 are emblazoned on the unit’s Regimental Colours. After the Second World War ended, the K-W members were reformed as the 54th LAA Regiment and, in 1956, they regained their formed identity as the SF of C. In 1964, the SF of C and HLI of C again merged to form the Highland Fusiliers of Canada (HF of C). In 1998, Her Majesty Queen Elizabeth II, granted the HF of C the right to her “Royal” designation in recognition of the Regiment’s long and distinguished service to the Commonwealth, Canada and the community of Waterloo Region. The Regiment and its soldiers have continued to serve Canada’s interests worldwide in peace support operations including Egypt, Cyprus, Cambodia, Namibia, the former Republic of Yugoslavia and, most recently, Afghanistan, Darfur, and, most recently, Ukraine, Iraq and Latvia.

Continue reading about The Royal Highland Fusiliers of Canada's history.