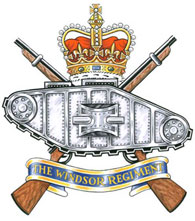 We are a reserve unit located in South Western Ontario. The Windsor Regiment (RCAC) is a Land Force Reserve reconnaissance regiment.

In 1932 the army was reorganized to seven divisions in order to meet the needs of a possible Canadian Expeditionary Force (CEF) if required. This included a major restructuring of the army reserve, then known as the Non-Permanent Active Militia (NPAM). Many regiments where disbanded, amalgamated or re-roled to other arms, but there was finally to be an armoured component by 1936. One of six Infantry Battalions was born in 1936 through General Order (GO) 188/36, the Essex Regiment (Tank) was established in Windsor, Ontario on 15 December 1936. The Regiment achieved the distinction of being the first unit of the Canadian Army to wear the black beret which was associated with armoured soldiers since 1924 in the British Royal Armoured Corps. In September 1940, the Essex Regiment (Tank) received the order to stand down from active duty and the Regiment never received an opportunity to deploy as a whole unit. Rather, the soldiers where offered the opportunity to re-enrol in the Regiment proper or to join a different unit. The split was approximately 50/50 with those that departed joining the ranks of Headquarters Squadron 1st Canadian Army Tank Brigade under Brigadier FF Worthington, MC, MM. On 27 January 1942 the Essex Regiment (Tank) was renamed 30th (Reserve) Reconnaissance Battalion (Essex Regiment) but the traditional name remained in brackets due to regimental sentiment. In 1949 the Regiment became The Windsor Regiment (RCAC).

Throughout the 1950's and the Korean War, volunteers from the Windsor Regiment were sent to augment the forces serving there. On the 25th of May 1951, the Windsor Regiment became allied with a reconnaissance regiment from Great Britain, the 3rd Carabineers, later to become the Royal Scots Dragoon Guards in 1971. In 1954, the Windsor Regiment re-roled from reconnaissance to the armoured role, receiving M4A2E8 Sherman Tanks and training at Camp Petawawa and Camp Meaford to conduct gun camps and maintenance, among others tasks. In 1963, after a debate to whether the Regiment would receive infantry colours or a cavalry guidon, the Regiment's guidon was presented to them by the Lieutenant-Governor of Ontario, W. Earl Rowe. Effective 1 March 1965, the Regiment was converted back to reconnaissance. Throughout the 1970's the Regiment supported operations including the Montreal Olympics, student Militia programs, Op Butane in support of severe winter storms in south-western Ontario, and sending a recce troop to Germany to partake in an exercise with the RCD in 1978.

In September of 1979, the Windsor Regiment once again changed from reconnaissance back to armour. Throughout 1980 and 1981, the Regiment trained for the Cougar Armoured Vehicle which had a three man crew. Training was divided into driving and maintenance, gunnery, and armoured tactics. Although deemed a 'tank trainer' by the Corps, the Cougars saw action in Bosnia-Herzegovina and Somalia. In the early 1990s the Regiment earned the Worthington Trophy for best armoured reserve unit, and the Cumberland trophy for the ninth and tenth time, demonstrating a high standard of training. The Regiment also sent two troops to support Regular Force operations in Cambodia, and seven in Bosnia-Herzegovina. To date, the Regiment was changed once again from armoured to a role in reconnaissance in 1997. As of 2011, more than two-dozen members have deployed on Canada's operations in Afghanistan.