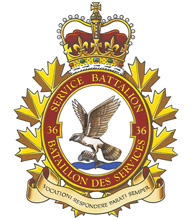 Within the first few years of service, new members must also be available to attend full-time courses during the summer (June-August) where technical skills are acquired for employment on operations and training during the part-time training year.

36 Svc Bn is always hiring confident and fit people interested in dynamic and technically challenging training in the area of CSS. No previous training is required.

In order to achieve the broader national objectives, Land Staff determined that some restructuring of current reserve CSS resources was needed. As part of this process, the amalgamation of the two existing service battalions within 36 Canadian Brigade Group was deemed necessary in other to meet the increased responsibilities for support to domestic and expeditionary operations.

Under the new structure, 36 Service Battalion will see one Battalion headquarters and two Force Generation companies. One Force Generation (FG) company will be located in Halifax and the other in Sydney. Each FG company will be comprised of two to five functional platoon building blocks which will serve as the basis for the technical and tactical training and the force generation of trained CSS personnel for expeditionary operations.

Within 36 Canadian Brigade Group, 36 Service Battalion will continue to provide real support to real operations at home and abroad.