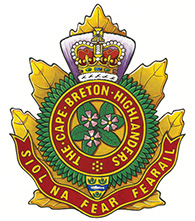 The Cape Breton Highlanders (CBH) is a Primary Reserve infantry regiment of the Canadian Armed Forces. Rich in the history of their Highlander descendants, CBH holds true to Scottish traditions through their dress uniforms with kilts and their team approach to mission success. The Regiment headquarters is located at the Victoria Park Armouries in Sydney, Nova Scotia.

As a member of an infantry platoon you will become a member of a dynamic team. You will learn how to professionally operate and maintain various types of weapons and equipment. The training may include Field Communication, Machine Gunner, Driver and Leadership courses. Also, you will learn field craft and battle procedures including, camouflage and concealment, internal security, patrolling, escape and evasion tactics, and also how to safely use explosives and pyrotechnics, communication and navigation systems.

The Battalion was organized on October 13, 1871 as The Victoria Provisional Battalion of Infantry from four independent companies.

Headquarters of this new unit was established at Baddeck, Victoria County, Cape Breton — hence the name. The ranks were filled predominantly by Highlanders, the descendants of Scots who had emigrated from the Duke of Argyll's estates.