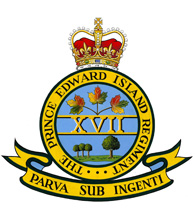 PARVA SUB INGENTI
The small under the protection of the great

The Prince Edward Island Regiment (RCAC) is a Primary Reserve armoured reconnaissance regiment of the Canadian Armed Forces. The regiment headquarters is in Charlottetown, PEI.

The Armoured Reconnaissance is the eyes and ears of the advancing friendly forces. Usually deployed 5 - 50 km in front of the main body. Their primary role is to obtain accurate information on the enemy and the ground in all phases of war and pass it back quickly to the higher command. Trained in observation and surveillance, Armoured officers are given the freedom to use their initiative and training to execute this task, normally while leading groups of 3 - 21 people. Armoured Soldiers operate and maintain armoured fighting vehicles, its weapon systems and its communication equipment.

Prince Edward Island was discovered in 1534 by Jacques Cartier. The Island's military history dates back to 1720, when 30 soldiers protected 300 French colonists at Port LaJoie, now Charlottetown. After the French surrender of the Fortress of Louisbourg in 1758, the Island fell under British control. Most of its Acadien inhabitants were subsequently deported. In 1769 St. Johns Island became a separate province from Nova Scotia, and was renamed Prince Edward Island in 1799.

In 1780 the Island's first Militia act was passed by the general assembly of the Island of St Johns. It stipulated that the Island's inhabitants should be well armed and properly trained to defend themselves. A Militia is an army composed of citizens, rather than professional soldiers. It is designed to be called out only in times of emergency. All Militia men had to provide their own uniform of accepted local pattern, but were armed at Government cost. They trained once a year, and by 1829 there were 5400 men, forming many localized units spread out over a number of Island communities.