Unless otherwise indicated, the information presented in this annex is based on the incidents recorded in the Operation HONOUR Tracking and Analysis System (OPHTAS). OPHTAS is an information management system that was introduced to replace the manual system (spreadsheet) that was used to monitor unit reports after the CAF introduced unit reporting procedures in April 2016.Footnote 3

OPHTAS was launched in January 2018 when the reports of inappropriate sexual behaviour incidents received between April 2016 and December 2017 were entered into the system. Routine unit recording on OPHTAS began in April 2018 and the system reached its initial operating capability in October 2018Footnote 4. OPHTAS is now the primary means of recording and tracking inappropriate sexual behaviour incidents in the CAF. The system is intended to reinforce other reporting processes, including Significant Incident Reports (SIRs), Commanders Critical Information Requirements (CCIR), and annual reports.

The table below indicates the number of recorded incidents within OPHTAS, involving CAF personnelFootnote 5. The Incident reported column represents the number of incidents that were reported to OPHTAS through the Chain of Command within a specific time period. The “Incidents Reported” figure within a specified period will only change if historical reports are entered in the system or if duplicate reports are identified and removed.

Reports can be made at any time and could be reported within a different month or fiscal year of the incident occurrence. There is no time limit for reporting an incident. Therefore, the “Incidents Occurred column” will increase over time as additional incidents are reported. 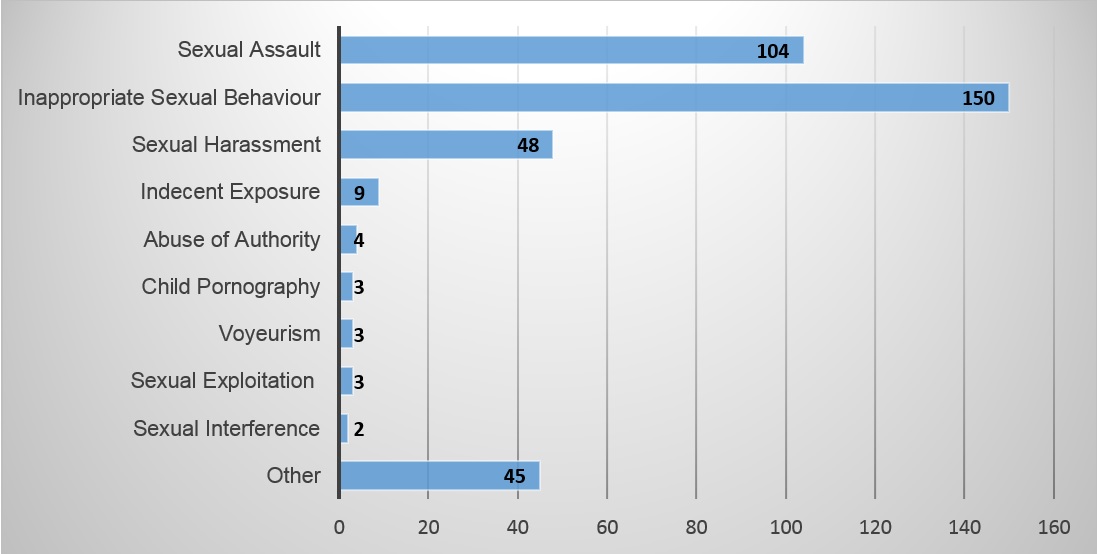 Incidents of Sexual Assaults recorded within OPHTAS are reflected in the table above and involve CAF members who are either the complainantFootnote 6 or the respondentFootnote 7. The table below outlines the sexual assaults that have been reported to the chain of command and consigned within OPHTAS since a CAF reporting system was introduced in April 2016.

Sexual Assault describes sexual assaults involving violence, unwanted sexual touching and sexual activity where the affected person was unable to consent. The OPHTAS records include incidents where information relating to sexual assaults is unknown or incomplete. There are also cases where the information available and recorded is limited due to a number of factors that are not under the control of the OPHTAS functioning (e.g. reports from civilian police).

Please note that these figures cannot be compared to Military Police statistics as the reporting mechanisms and the responsibilities are different. Incidents recorded within OPHTAS are known by the Chain of Command and reported as such.

Profile of Who Reported Incidents Recorded within OPHTAS 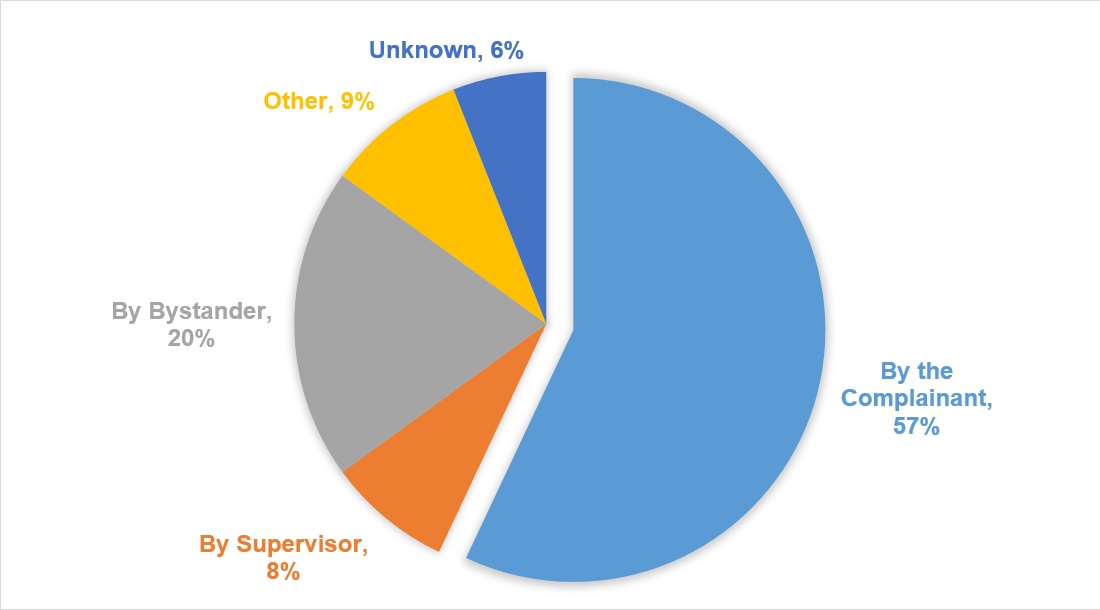 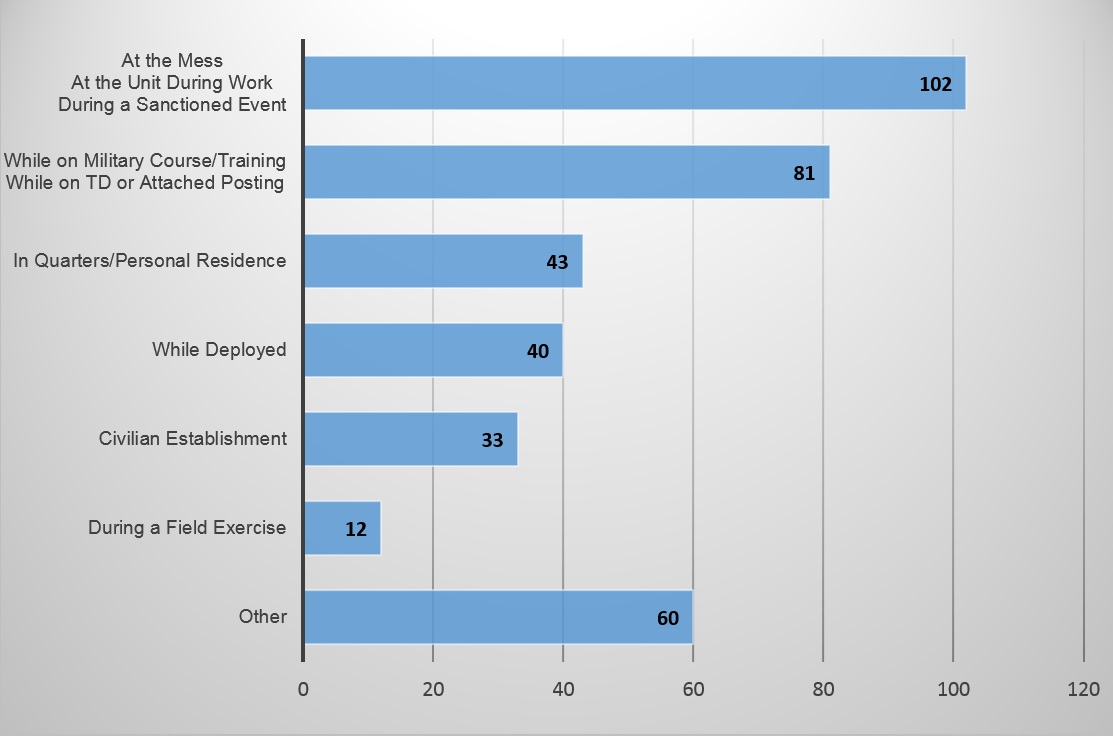 Based on Provost Marshal reporting, overall police reports of sexual misconduct incidents have increased since Operation HONOUR began: from an average of 88 per calendar year (2010/2015) to an average of 189 per calendar year (2015/2017). Members are also reporting less serious offences that may have gone unreported before.Directeur général – Gestion intégrée des conflits et des plaintes (DGGICP)

Director General ICCM reported 31 Operation HONOUR cases in its FY 2017/2018 annual report. These reports were collected during the implementation of the ICCM system. The information was collected primarily from the prototype Conflict and Complaint Management Services (CCMS) centres in Borden, Kingston, Montreal and Valcartier. These cases were transferred to the appropriate authority for action. ICCM procedures include specific protocols for “warm transfers” to the Sexual Misconduct Response Centre, which are governed by a formal service-level agreement.

The Director General of Military Personnel Research and Analysis (DGMPRA) is leading CAF research into inappropriate sexual behaviour. They are managing an extensive research programme that is designed to influence cultural change in support of Operation HONOUR through comprehensive, multi-phase research focussed on understanding the key cultural dimensions, incidence, and response to harmful sex and gender-based behaviours in DND/CAF. This research includes extensive survey activities, and both primary and secondary research and analysis, which has already produced a significant body of work to improve our understanding of sexual misconduct in the CAF.

DGMPRA is working closely with a range of partners, including Statistics Canada, to measure the incidence of sexual misconduct and related issues. They are managing a DND/CAF survey programme to provide insight into inappropriate behaviour and how attitudes and perceptions are shifting over time.

DGMPRA has conducted additional analysis on the 2016 Statistics Canada Survey on Sexual Misconduct in the CAF and has conducted similar surveys on officer cadets and recruits at the Canadian Forces Leadership and Recruit School, the Cadet Organizations Administration and Training Service (COATS), as well as the occupational training conducted by Military Personnel Command, the Royal Canadian Navy, the Canadian Army and the Royal Canadian Airforce. Collectively, this research has been analysed and reported in eight separate DRDC scientific letters.

DGMPRA is also managing surveys on Harassment, Workplace Well-being, Bystander Behaviours, and CAF attitudes and perceptions (the Your Say Surveys). This work has resulted in the publication of three DRDC scientific letters on the Your Say Surveys, and the broader issue of Harassment and Discrimination in the CAF. They have also published a separate contract report on the Bystander Effect. This research is important because it provides insight into institutional problems including harassment and discrimination.

It also provides awareness of how attitudes and perceptions are changing over time. The Your Say Surveys indicate that the number of CAF members who agree that leaders take sexual misconduct seriously has changed from 85% in 2016 to 80% in 2017. CAF members strongly agree that leaders are reinforcing a culture of mutual respect, honour and dignity (86% in 2016; 82% in 2017).

DGMPRA is also conducting primary quantitative research on Socialization (Basic Military Qualification and Basic Military Officer Qualification Training) and Leadership Dynamics (Senior Non-commissioned Members). This research has been analysed and reported in four DRDC scientific letters and five contract reports. They are conducting primary qualitative research to improve understanding of Victim Support and the experience of LGBT personnel in the Canadian Armed Forces. This research has resulted in the publication of a contact report (literature review) on Sexual Misconduct and the Experiences of LGBT personnel in military organizations. This is intended to improve CAF victim support services and support the development of more effective approaches to respond to and prevent sexual misconduct.

The broader DGMPRA research programme has produced seven scientific letters on Sexual Misconduct, Gender-Based Analysis Plus, and Performance Measurement as well as four contract reports related to Sexual Misconduct, Measuring and Monitoring Culture Change, and the Role of Social Media in Misconduct.

DGMPRA is also supporting NATO research on Sexual Violence in the Military, and The Technical Cooperation Programme (TTCP) research on Organizational Responses to Inappropriate Behaviours.

DGMPRA has produced a significant body of work on inappropriate sexual behaviour. There is an ongoing challenge to share, promote and communicate this work. The campaign planning process should assist in leveraging this work and focussing future efforts to support victims, survivors and affected people, and understand, respond to, and prevent sexual misconduct.

Operation HONOUR has led to changes in CAF training and education programmes, which have been incorporated in basic, leadership, and occupation training. The CAF is conducting three professional development programmes that are specifically designed to address inappropriate sexual behaviour. Bystander Intervention Training has been conducted throughout the CAF. This training uses facilitated discussions and scenarios to teach participants about safe and positive approaches that can be used to prevent or stop people who are committing acts involving sexual misconduct and encourage public support for anyone affected by this behaviour.

The Respect in the CAF Workshop is a one-day interactive workshop to promote respect in the CAF through increased awareness and understanding. The workshop uses scenarios, facilitated discussions, and small group activities to teach participants to recognize, respond to, and prevent sexual misconduct as well how to support victims, survivors and affected people. 2,218 CAF members participated in this training between 1 April 2017 and 31 August 2018. The Royal Canadian Navy also introduced the Leadership, Respect and Honour programme. This training is delivered to Navy personnel throughout their occupation training. The programme is included in all non-commissioned member qualification courses and all officer courses. The initial module completed pilot trials and is being delivered at both Naval Fleet School (Atlantic) and Naval Fleet School (Pacific). Most of the remaining modules are undergoing pilot trials and should be fully implemented by April 2019. The Chief of Department and Command modules are still under development.

Twenty courts martial with Sexual Misconduct charges were completed in FY 2017/2018. These courts martial resulted in 14 convictions (70%), one conviction of a lesser offence (5%), and five Not Guilty findings (25%).

The FY 2017/2018 sexual harassment convictions included charges for Disobedience of Lawful Command, Quarrels and Disturbances, Drunkenness, Conduct to Prejudice of Good Order and Discipline, and one Criminal Code offence (Assault). Punishments included Reprimands, a Caution, Fines ranging from $100-$1,000, Confinement to Ship or Barracks, and Extra Work and Drill.

Punishments included Reduction in Rank, Reprimand, Fines ranging from $150 to $1,000, and Confinement to Ship or Barracks.

Perpetrators found guilty of sexual misconduct are subject to an administrative review.  After due process, 74 members were released from the CAF between August 2015 and September 2018. The table below summarizes administrative review decisions during fiscal year 2017/2018.

The Complainant is an individual who has become a victim or survivor of an incident.

The Respondent is an individual who has been involved with or instigated an incident.

This information was taken from the FY 2017/2018 JAG Annual Report and summaries of Records of Disciplinary Proceedings provided by the Office of the Judge Advocate General.

The 2017/2018 JAG Annual Report uses the phrase “Sexual Harassment” to describe a wide range of inappropriate sexual behaviour that was dealt with under Article 129 of the National Defence Act – Conduct to the Prejudice of Good Order and Discipline.

This information was provided by Director Military Career Administration (DMCA)

Please note that the “Other” category includes cases where no administrative action was taken because there was insufficient information/evidence to substantiate further action.