Canadian Forces Base Borden (CFB Borden) is located approximately 100 kilometers north of Toronto, in the heart of Simcoe County, one of the major tourist areas in Ontario. The base is the largest training establishment in the CAF and is home to a variety of other military and Defence Team organizations. On average, CFB Borden trains 20,000 military personnel annually. It also employs approximately 3,250 military members and 1,500 civilians. The base is comprised of 21,000 acres of land, including a 6,000 acre training area. The Commander of CFB Borden is also Commander of the Military Personnel Generation Training Group (MPGTG), the headquarters of which are also located at CFB Borden.

CFB Borden was created to train more troops for Canada’s contribution to the First World War. Known at the time as “Sandy Plains”, the ground was designated as a new training grounds for Canadian Expeditionary Force battalions destined for over-seas duty. The Grey and Simcoe Foresters cleared the land, and in the summer of 1916 Camp Borden was officially opened by Sir Sam Hughes, the Minister of Militia and Defense. Thousands of soldiers trained in Borden, and development continued, including 18 km of trenches built to simulate the trench warfare of WWI. CFB Borden celebrated its centennial year in 2016 and is proud to continue our mission of training for a second century.

Other Federal Government Departments, Foreign Military Forces, Provincial, Regional and Municipal governments as well as the public may be provided access to certain training programs and some physical assets held at CFB Borden.

Under-utilized property, infrastructure or capability may occasionally be available due to cyclical workloads. Where a request does not conflict with military operations or place the Department of National Defence in unfair competition with private industry, arrangements may be made to access Base Borden facilities and services. Please contact Base Operations Business Development Office for further inquiries. 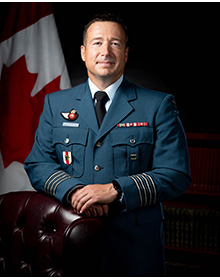 Colonel Jonathan Michaud enrolled in the Canadian Forces in 1998 and graduated from the Royal Military College of Canada (RMC) in Kingston in 2003. His career has encompassed various postings within the RCAF and the Joint Environment, having had the privilege to lead aviators, soldiers, and sailors at the Element, Squadron, Air Task Force and Support Component levels.

His operational tours include deployments to Kandahar, Afghanistan, in 2006 and 2008 where he served as the Task Force Engineer Infrastructure Advisor and the Construction Management Organization second in command respectively. He later deployed on operation IMPACT in the Middle East, in 2019 as the Air Task Force Commander with detachments from the Tactical Aviation and Air Mobility Communities.

In 2018, Col Michaud became the Commanding Officer of 8 Wing Mission Support Squadron and he subsequently assumed the position of Director of Coordination within the Vice Chief of Defence Staff Group in 2020.

Col Michaud is a graduate of the Joint Command Staff Program and has a Bachelor of Science in Chemical Engineering and a Master’s Degree in Defence Studies. He is a registered Professional Engineer.

Colonel Michaud will be assuming the Commander of Canadian Forces Base Borden and Military Personnel Generation Training Group responsibilities in the summer of 2022. 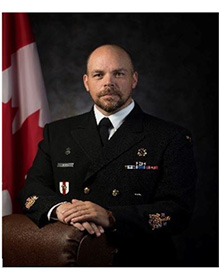 Chief Petty Officer Wilcox was born in Edmonton, AB. He enrolled in the Canadian Armed Forces in October 1994 as an Armoured Crewman. Upon graduating basic training in St-Jean and completing QL3 and Battle School in Gagetown he was posted to the Lord Strathconas Horse in Calgary. In 1996 he deployed to Bosnia under SFOR with the LDSH Recce Squadron. With the closure of CFB Calgary he was moved with the regiment to Edmonton.

In 2000 CPO1 Wilcox remustered and changed to the Navy uniform and became a Hull Technician. As a young technician he sailed aboard HMCS Regina, HMCS Winnipeg, and HMCS Protecteur on the west coast. While on the west coast he completed his QL5 and was subsequently promoted to Master Seaman and posted to the Canadian Forces Damage Control School Galiano as a fire fighting instructor. After the Damage Control School CPO1 Wilcox deployed to Afghanistan with CANSOF.

In 2008 upon returning to the fleet CPO1 Wilcox was promoted to Petty Officer 2nd Class and worked for the standards division at the Canadian Forces Fleet School Pacific (Engineering). That job was short lived and within a year PO2 Wilcox was posted back to HMCS Calgary as the Hull Systems manager overseeing all structural and hotel services maintenance.

CPO1 Wilcox remained aboard HMCS Calgary until his posting to the Canadian Forces Recruit and Leadership School, he was immediately promoted to Petty Officer 1st Class and was a Platoon Commander for 4 years and spent the last year as the school Standards Warrant Officer. CPO1 Wilcox returned to Esquimalt as the Senior Hull Tech aboard HMCS Regina where he removed the ship from the FELEX docking period and set the vessel to sea.

CPO1 Wilcox was promoted to Chief Petty Officer 2nd Class and was posted to Director General Marine Engineer and Project Management in Ottawa, he was the Electro Magnetic and Underwater Signature Management Chief, and he was responsible for the refit of 12 vessels modernizing their underwater signatures and anti-mine warfare systems.

CPO1 Wilcox was then posted to Directorate of Professional Military Conduct- Operation HONOUR, he was assigned to manage the CAF's monitoring program on all Sexual Misconduct cases.

CPO1 Wilcox was appointed to the Canadian Forces Training Development Center as School Chief in July 2020.

In June 2022 he was appointed to his current position as CFB Borden / MPGTG Formation Chief Petty Officer.

CPO1 Wilcox holds Masters of Arts in International and Geo-Political Leadership from Royal Roads University. He was awarded the Royal Roads Founders award for his work in the field of gender integration and leadership.

CPO1 Wilcox along with his exceptionally supportive daughter continues to enjoy all that military life has to offer.