Overview of the Canada-Chile commission

The Commission is composed of a Council, a Joint Submission Committee and a Joint Public Advisory Committee. The Commission is supported by two National Secretariats, Canadian and Chilean, established in each country.

Cooperative activities are planned and carried out jointly with the resources of the Commission.The Work Program and Budget of the Commission is prepared jointly by the National Secretariats and approved by the Council. The Agreement also provides for the preparation of an Annual Report by the Commission. 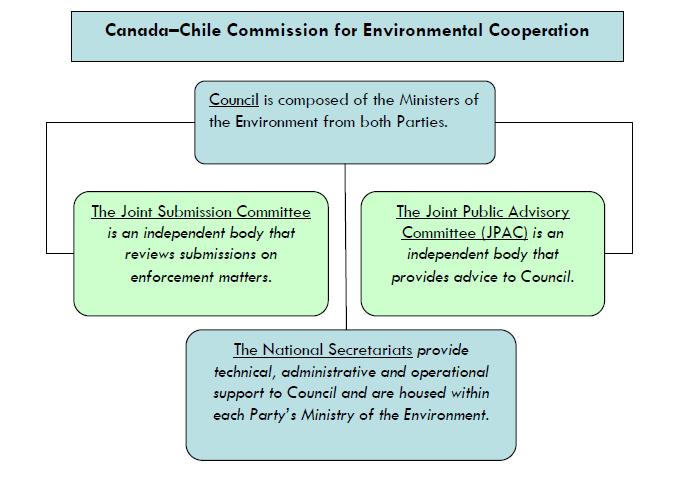 The Council, which is established under Article 8, section A of the CCAEC, is the governing body of the Commission and is comprised of the ministers of the environment for Canada and Chile (or their designates). The Council must meet at least once a year in regular session.

The main functions of the Council are to:

(a) serve as a forum for the discussion of environmental matters within the scope of this Agreement;

(b) oversee the implementation and develop recommendations on the further elaboration of this Agreement and, to this end, the Council shall, within three years after the date of entry into force of this Agreement, review its operation and effectiveness in the light of experience;

(c) oversee the functions assigned to the National Secretariats within the scope of this Agreement;

(d) address questions and differences that may arise between the Parties regarding the interpretation or application of this Agreement;

(e) approve the annual program of work and budget of the Commission; and

(f) promote and facilitate cooperation between the Parties with respect to environmental matters.

The Joint Submission Committee (JSC), established under Article 12 of the CCAEC, is responsible for reviewing submissions on enforcement matters under Article 14 (2) of the Agreement where a citizen of Canada or Chile may file a written complaint asserting that a Party is failing to effectively enforce an environmental law.

The JSC is composed of two non-governmental representatives, one from each Party. Members are chosen by the Council for a term.

Chilean Member: To be confirmed

The Joint Public Advisory Committee (JPAC), which is established under Article 16 of the CCAEC, is comprised of four non-governmental members, two from each Party. It serves as the bridge for public input to work of the Commission. The JPAC provides advice to the Council on any matter within the scope of the Agreement and meets at least once a year at the time of the annual session of Council.