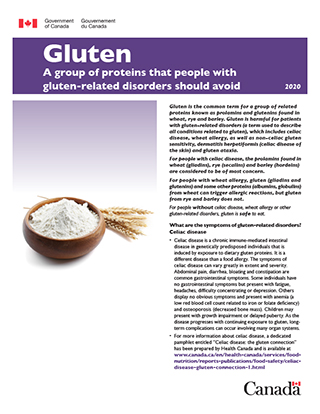 Gluten is the common term for a group of related proteins known as prolamins and glutenins found in wheat, rye and barley. Gluten is harmful for patients with gluten-related disorders (a term used to describe all conditions related to gluten), which includes celiac disease, wheat allergy, as well as non-celiac gluten sensitivity, dermatitis herpetiformis (celiac disease of the skin) and gluten ataxia.

For people with celiac disease, the prolamins found in wheat (gliadins), rye (secalins) and barley (hordeins) are considered to be of most concern.

For people with wheat allergy, gluten (gliadins and glutenins) and some other proteins (albumins, globulins) from wheat can trigger allergic reactions, but gluten from rye and barley does not.

For people without celiac disease, wheat allergy or other gluten-related disorders, gluten is safe to eat.

What are the symptoms of gluten-related disorders?

Celiac disease is a chronic immune-mediated intestinal disease in genetically predisposed individuals that is induced by exposure to dietary gluten proteins. It is a different disease than a food allergy.

The symptoms of celiac disease can vary greatly in extent and severity.  Abdominal pain, diarrhea, bloating and constipation are common gastrointestinal symptoms.  Some individuals have no gastrointestinal symptoms but present with fatigue, headaches, difficulty concentrating or depression. Others display no obvious symptoms and present with anemia (a low red blood cell count related to iron or folate deficiency) and osteoporosis (decreased bone mass).  Children may present with growth impairment or delayed puberty.  As the disease progresses with continuing exposure to gluten, long-term complications can occur involving many organ systems.

For more information about celiac disease, a dedicated pamphlet entitled “Celiac disease: the gluten connection” has been prepared by Health Canada.

In wheat allergy, the symptoms are related to an IgE-mediated immune response that occurs within minutes to hours of wheat ingestion and can involve several organ systems (skin, respiratory, gastrointestinal, and cardiovascular). Wheat allergy can also lead to anaphylaxis. The wheat proteins that can trigger an allergic reaction include gluten proteins (i.e. gliadins and glutenins) and other proteins such as albumins and globulins.

For more information about wheat allergy and its symptoms, a dedicated pamphlet has been prepared by Health Canada.

The following are a few examples of other gluten-related disorders regularly cited in the medical literature:

Gluten-related disorders associated with other symptoms:

How can reactions to gluten be prevented?

The only current treatment for celiac disease is to continually maintain a strict gluten-free diet (i.e. with no wheat, rye or barley).

Various proteins from wheat, including gluten, can trigger allergic reactions in wheat allergic individuals. The only treatment for wheat allergy is to strictly maintain a wheat-free diet (but rye and barley can be safely consumed).

How can I avoid exposure to gluten?

I have to avoid gluten. Can I consume oats?

While oats do not contain gluten, they are often grown, harvested and transported in close proximity to other cereal grains that do contain gluten, including wheat, rye and barley. This can result in cross-contamination at any point of the production chain. Since oats can often be contaminated by other cereal grains which contain gluten, the Food and Drug Regulations require that oats must always be declared in the list of ingredients, or in a “contains” statement, similar to other food allergens or gluten.

What does a “gluten-free” claim on a food product mean?

Canada's Food and Drug Regulations outline specific requirements for the use of gluten-free claims on prepackaged foods. Products making a gluten-free claim must not contain any ingredients that contain gluten and must control against cross-contamination with gluten or ingredients containing gluten during manufacturing. However, Health Canada considers that the presence of gluten due to cross-contamination at levels which do not exceed 20 ppm is acceptable in products that are labelled “gluten-free”. The choice of the 20 ppm level for the purposes of risk management is consistent with international standards. Prepackaged products labelled “gluten-free” statement can be consumed safely by people with celiac disease.

What do I do if I am not sure whether a product contains gluten or a gluten source?

If you have celiac disease or another gluten-related disorder, do not eat, drink or use the product. Contact the manufacturer to obtain ingredient information.

Triticale is a hybrid grain created by crossing wheat and rye. Although not typically available commercially, people with wheat allergy and people with celiac disease should avoid triticale as well.

Examples of foods and products that contain or often contain sources of gluten (wheat, rye and barley)

In the past, some products have used other names for wheat on their labels. These names are not permitted without the word wheat also appearing on the label, based on the current labelling requirements for food allergens, gluten sources and added sulphites; however, if you have a wheat allergy or celiac disease and see one of the following ingredients listed on a product you should not eat it:

Examples of food and other products that can contain wheat can be found in the wheat priority allergen pamphlet.

Examples of foods and products that contain or often contain rye:

Examples of foods and products that contain or often contain barley:

Note: These lists are not complete and may change. Food and food products purchased from other countries, through mail-order or the Internet, are not always produced using the same manufacturing and labelling standards as in Canada.

What can I do?

Consult your family physician, allergist and/or gastroenterologist as well as your dietician in order to obtain the advice and support needed to help manage your condition. Contact a celiac disease association for further information.

If you or anyone you know has food allergies or celiac disease and would like to receive information about food being recalled due to improper allergen labelling, sign up for the Canadian Food Inspection Agency’s (CFIA) free e-mail “Food Recalls and Allergy Alerts” notification service available at www.inspection.gc.ca . When you sign up you will automatically receive timely food recall notifications.

Avoid food and products that do not have an ingredient list and read labels every time you shop.

For people with celiac disease, if the label indicates that a product “contains” or “may contain” wheat or triticale, rye, barley or oats, do not eat it. Oats can be consumed if specified as “gluten-free oats” in the list of ingredients. If you do not recognize an ingredient, there is no ingredient list available, or if you don’t understand the language written on the packaging, it is best to avoid the product.

Watch out for cross-contamination

What is the Government of Canada doing about priority food allergens, gluten sources and added sulphites?

The Government of Canada is committed to providing Canadians with the information that they need to make safe and healthy food choices. The Canadian Food Inspection Agency (CFIA) and Health Canada work closely with municipal, provincial and territorial partners and industry to meet this goal.

The CFIA enforces Canada’s labelling laws and works with associations, distributors, food manufacturers and importers to ensure complete and appropriate labelling of all foods. The CFIA recommends that food companies establish effective allergen controls to prevent the occurrence of undeclared allergens and cross-contamination. The CFIA has developed guidelines and tools to aid them in developing these controls. When the CFIA becomes aware of a potential hazard associated with a food, such as undeclared allergens or gluten sources, Health Canada is asked to assess the situation. When a serious risk is identified, the food product is recalled from the marketplace and a public warning is issued. The CFIA has also published several advisories to industry and consumers regarding allergens in food.

Health Canada has worked with the medical community, consumer associations, and the food industry to enhance labelling regulations for food allergens, gluten sources and added sulphites in pre-packaged food sold in Canada. The Food and Drug Regulations require that the most common foods and food ingredients that may cause life-threatening or severe allergic reactions are always clearly identified by their common names on food labels allowing consumers to easily recognize them.

More information on the regulations that enhance the labelling of food allergens, gluten sources and added sulphites.

If you come across a food that you think is improperly labelled, contact the CFIA and provide information about the product.

Where can I get more information?

For more information on:

Below are some organizations that can provide additional celiac disease and NCGS information: