After leaving Switzerland in 1976, Chef Hans Anderegg arrived in Prince Edward Island with little knowledge of English or French, but a passion that drove him to become one of the major figures in the island’s culinary community.

Chef Hans acknowledges being part of this transformation, but his greater focus today is on the future of the food profession in his province.

“The biggest challenge we face in PEI is the shortage of cooks and chefs during peak periods,” he says. “That’s why it’s so important to promote the talent and industry on the island.”

Developing that talent has been the foundation of Chef Hans’ work. He has been an instructor at Holland College’s Culinary Institute of Canada since 1988, and when the Culinary Institute was selected to represent Canada at the 2004 and 2008 Culinary Olympics, he was the team’s head coach. The 2004 team won gold and silver medals and placed fifth in the world—the most successful showing ever for a Canadian team—and chefs across the region credit this success to the efforts of Chef Hans.

“Hans has both an understanding and experience that you can’t manufacture or fake, so when you’re in a training environment with someone teaching from the gut, as he does, it’s so powerful,” says Austin Clement, Program Manager of The Culinary Institute of Canada. “Students learned pretty quickly that you didn’t send any food to his class unless it made the grade. He leads by example and commands respect.”

While often fundraising for various community initiatives and mentoring young chefs, Chef Hans is also a member of the local Lions club, a former leader for Scouts Canada, and somebody who Chef Clement sees as “a model citizen.”

He is also a diehard mushroom forager who seldom reveals the locations of his mushrooms, but as a culinary thank he will sometimes invite other chefs on mushroom-harvesting trips to these secret spots.

What is not a secret about Chef Hans is the major impact he has had in developing PEI’s food culture.

Colleagues say his mentoring of food professionals has probably been the most significant factor towards the PEI becoming a major food destination in North America, and almost all of the notable restaurants on the island are staffed by Culinary Institute graduates who have spent at least some time learning from Chef Hans. 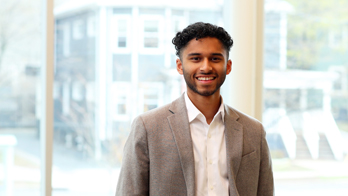