Your Navy Today is a monthly newsletter highlighting your Royal Canadian Navy’s current operations, stories about our sailors and historic naval heroes, new equipment and technology and the top photos and videos. Click here to subscribe to the monthly email. Read our stories as they’re released by joining the Your Navy Today Facebook group. 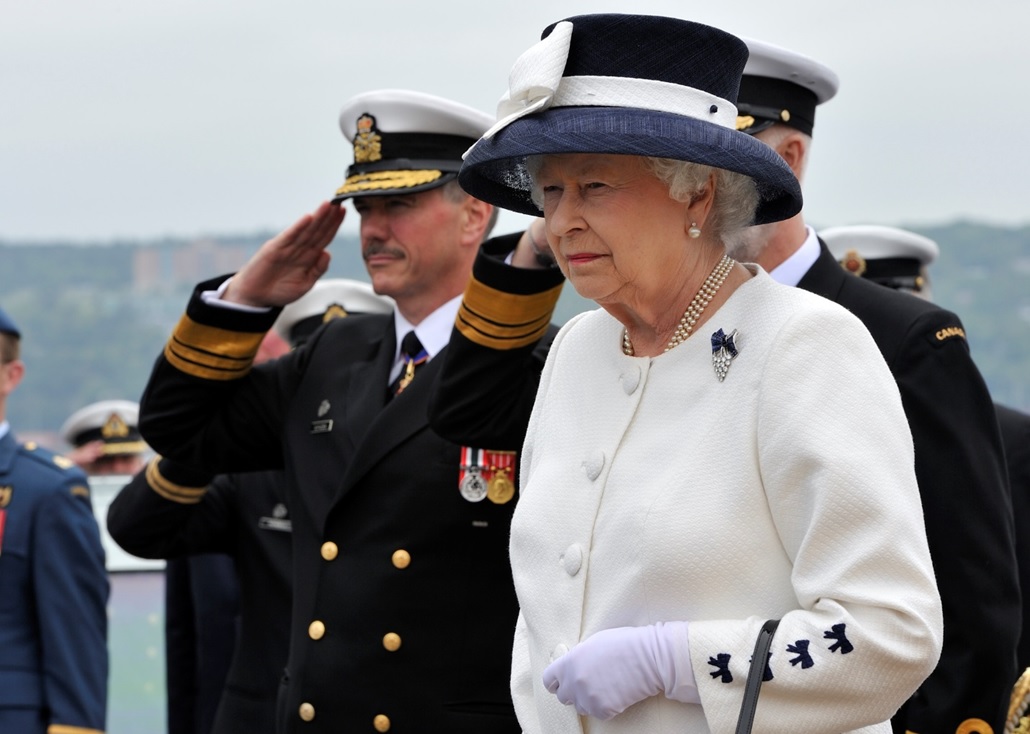 Her Majesty Queen Elizabeth II during the International Fleet Review in Halifax in 2010.

After taking the throne on February 6, 1952 and reigning for 70 years and 127 days, Her Majesty Queen Elizabeth II died on September 8, 2022 at the age of 96. She was the longest reigning monarch in British and Commonwealth history.

The Queen’s legacy runs deep within the Royal Canadian Navy (RCN). Her passing is deeply felt by our members and we extend our deepest condolences to the Royal Family as we honour Her Majesty’s memory.

Following the Queen’s passing and effective immediately, all commissioned RCN vessels are now known as His Majesty’s Canadian Ships and Submarines to recognize King Charles III. This also applies to Naval Reserve Divisions across the country.

Units and establishments that use the “HMC” prefix must also update their names. So, the dockyards in Esquimalt, B.C., and Halifax are now both known as His Majesty’s Canadian Dockyard. Queen’s Harbour Master is now known as King’s Harbour Master. Note that the change of monarch may not affect French translations in the same way. Please click through for further details. 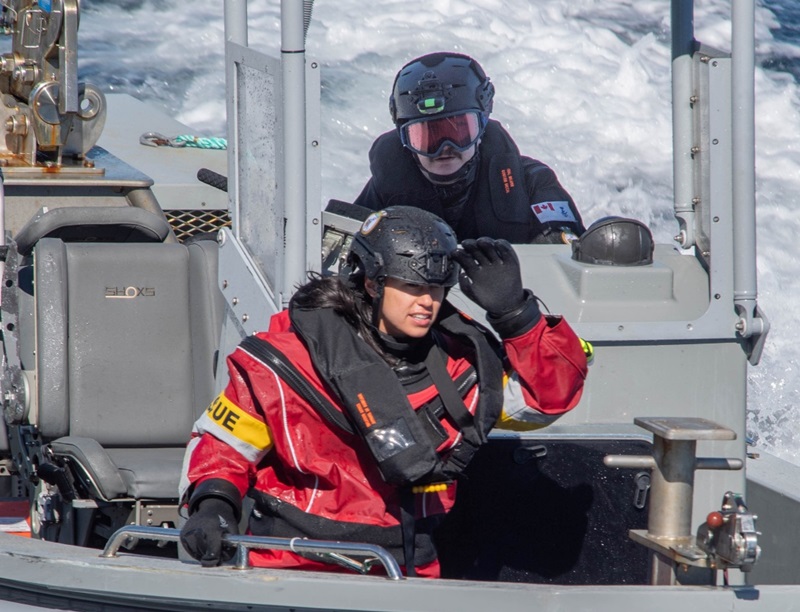 Sailors on board His Majesty’s Canadian Ships (HMCS) Margaret Brooke and Goose Bay have been busy with several training exercises since the ship departed earlier this month for Operation (Op) Nanook 2022.

On August 4, the ships conducted a boarding exercise with the United States Coast Guard, with Canadian sailors acting as a ship’s crew illegally fishing in Arctic waters. Such collaboration helps Canada and the U.S. deter unlawful activity in northern waters together.

On August 8, the Canadian ships partnered with NATO ships, as well as the Canadian and U.S. Coast Guards, for a search and rescue exercise. Focusing on medical assessments and casualty assistance in a vessel fire and flood, the exercise helped the teams coordinate resources, effectively communicate and collaboratively respond to emergencies.

On August 17, Commander Nicole Robichaud, Margaret Brooke’s Commanding Officer, welcomed aboard Mayor Avaaraq Olsen of Nuuk, Greenland, to discuss the operation and to enhance knowledge of the local community.

In other Nanook news, HMCS Harry DeWolf had to cancel its participation in the operation due to mechanical problems. The ship has returned to its home port of Halifax for immediate repairs.

Vancouver and Winnipeg transition from RIMPAC to Projection 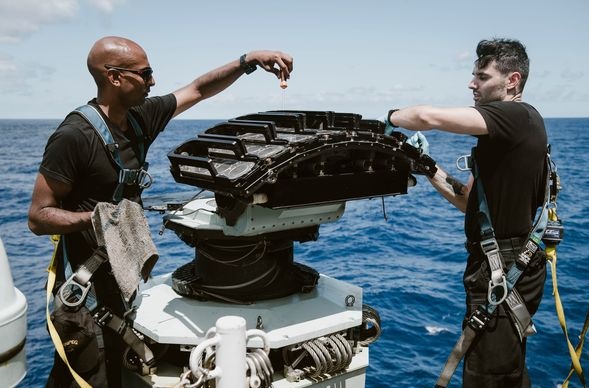 After intensive weeks participating in the world’s largest international maritime exercise, Exercise Rim of the Pacific (RIMPAC) 2022, HMC Ships Vancouver and Winnipeg will remain at sea in the Indo-Pacific until December on Operations Projection and Neon.

RIMPAC occurred in and around the Hawaiian Islands and Southern California from June 29 until August 4, where HMCS Vancouver became the first RCN vessel to launch a surface off-board passive decoy during .

Meanwhile, HMCS Winnipeg successfully deployed drones and an embarked helicopter on July 12 when a decommissioned ship was sunk for combat training.

As they transitioned to Op Projection, Vancouver and Winnipeg have gone their separate ways to collaborate with regional militaries and international security partners to reinforce collective defence and promote stability in the region.

While in North East Asia for two months, HMCS Vancouver will contribute to the monitoring of United Nations sanctions against North Korea through Op Neon, while HMCS Winnipeg proceeds to Southeast Asia.

On the way to the East China Sea to begin Op Neon, Vancouver, together with the United States Ship Higgins, transited through the Taiwan Strait.

They will also independently and cooperatively sail alongside allied and partner navies in the international waters of the East and South China Seas. 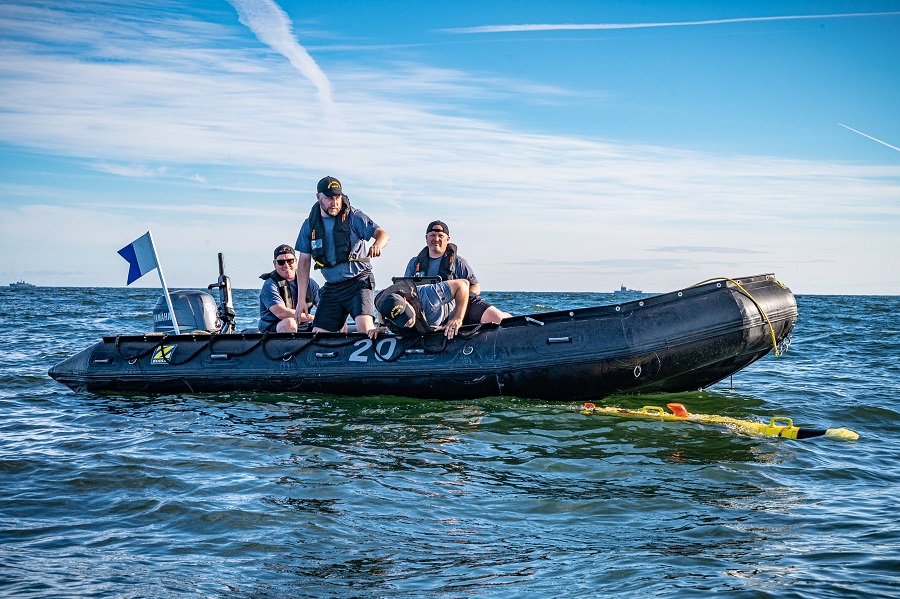 This deployment demonstrates Canada’s dedication to NATO and provides assurance to our allies following Russia’s attack on Ukraine, which began on February 24. In rare situations the ships have also deployed their mine countermeasures system, which includes a clearance dive team, a towed-array to scan the sea floor and a remote bottom-object inspection vehicle.

The ships arrived in Kiel, Germany, on July 16, joining Standing NATO Mine Countermeasures Group One to begin operations in the Baltic Sea. Kingston and Summerside are set to return to Canada in October.

Do you have a story to tell or know a sailor who does? Send us your story idea.

RCN forges ties with the Nunatsiavut 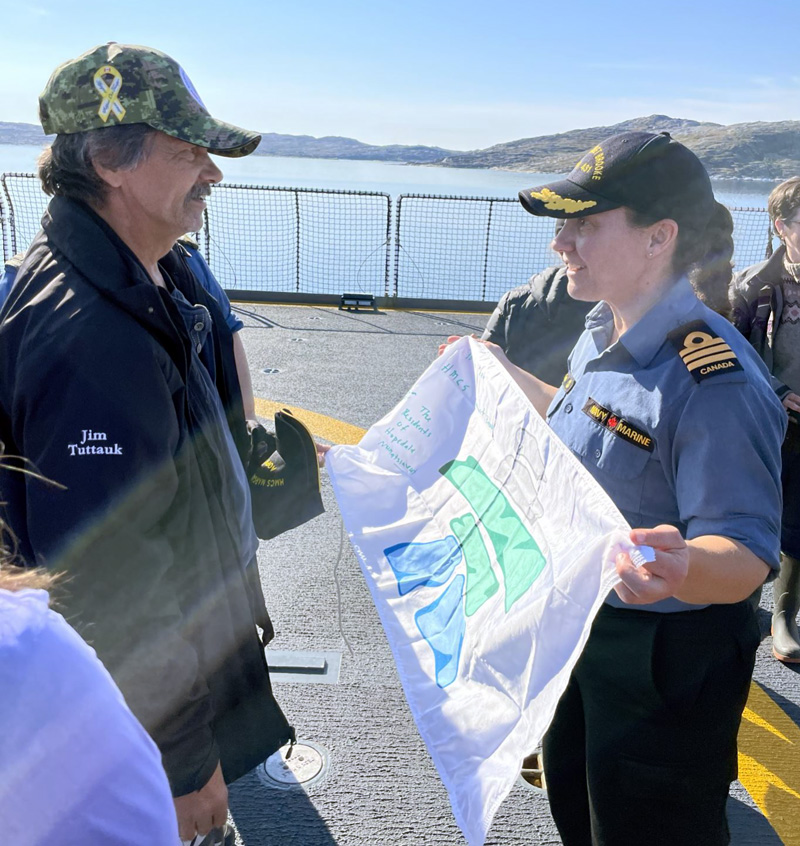 The RCN celebrates its second northern affiliation ceremony today with the Nunatsiavut region in Hopedale, Labrador.

At the heart of the affiliation between HMCS Margaret Brooke, the RCN’s second new Arctic and Offshore Patrol Ship (AOPS), and Nunatsiavut are the relationships that are made between the community and the ship’s company. Throughout the next several years, the RCN will work with the Inuit Nunangat during routine operations in our Northern waters. 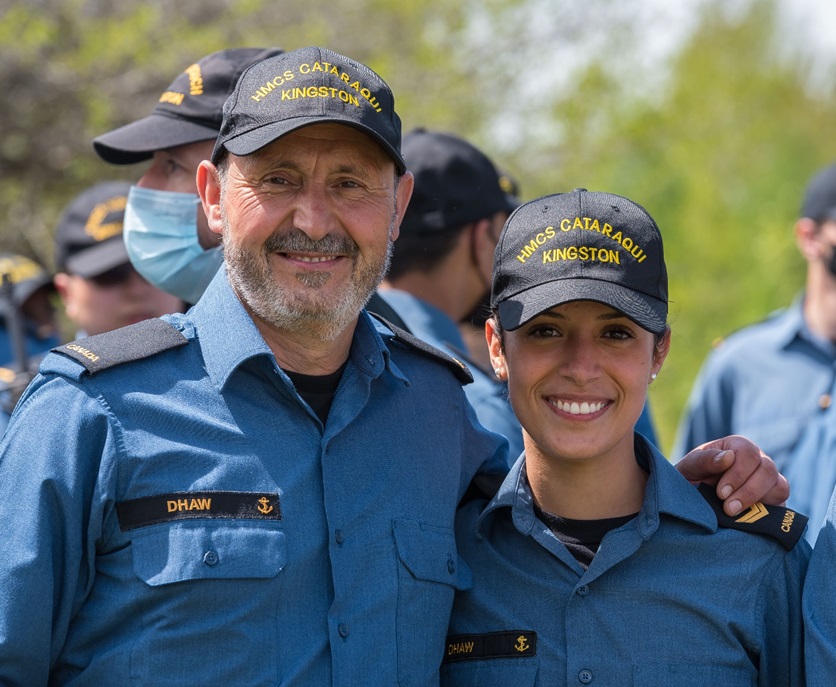 The Dhaw family’s trajectory into the RCN was anything but conventional. Sailor 1st Class (S1) Dania Dhaw’s eagerness for new opportunities to travel, learn new skills and meet new people prompted her to encourage her father, Sailor 3rd Class (S3) Muftah Dhaw, to see for himself.

“I was telling him how fun it is,” S1 Dhaw said. “My dad has worked his whole life to support our family. There wasn’t a lot of convincing. He saw how I was and he was like, ‘OK. Help me with the process.’” 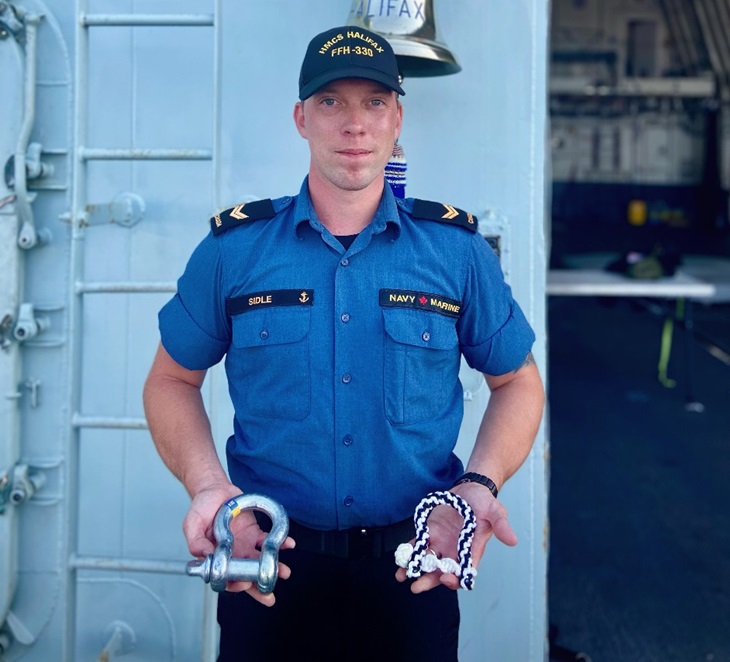 Once responsible for every piece of rope on board a ship, the traditional boatswain naval trade used to require a lot of handiwork.

Over time, the trade has evolved to require less knack and artistry, but S1 Keiran Sidle is dedicated to preserving the craft of rope work.

“It could save your life,” said S1 Sidle, who is also a surface rescue swimmer. “When I rescue somebody, I have the horse collar around me. A lot of people don’t think of knots as being that important.” 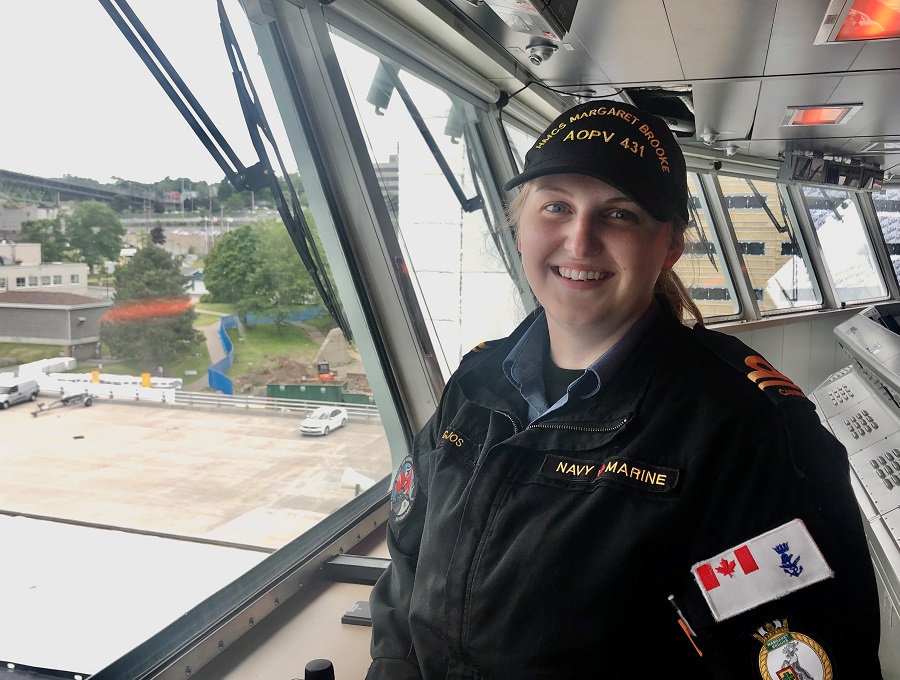 Building relationships and recognizing Indigenous peoples’ rich history and diverse culture is essential to the RCN as an organization that represents the country. For this reason, HMCS Margaret Brooke has created a unique, first of its kind position.

The new Indigenous Liaison Officer is exclusive to the ship and will promote a greater understanding of Indigenous history and foster meaningful relationships with Indigenous communities in Canada’s North.

“I never thought I’d be able to have a position like this, especially so early in my career,” said Margaret Brooke’s Indigenous Liaison Officer, Sub-Lieutenant Emily Gjos. “This is a really positive step. It shows that junior officers like myself can have a role to play in supporting strategic outreach and finding opportunities for respectful relationship building.” 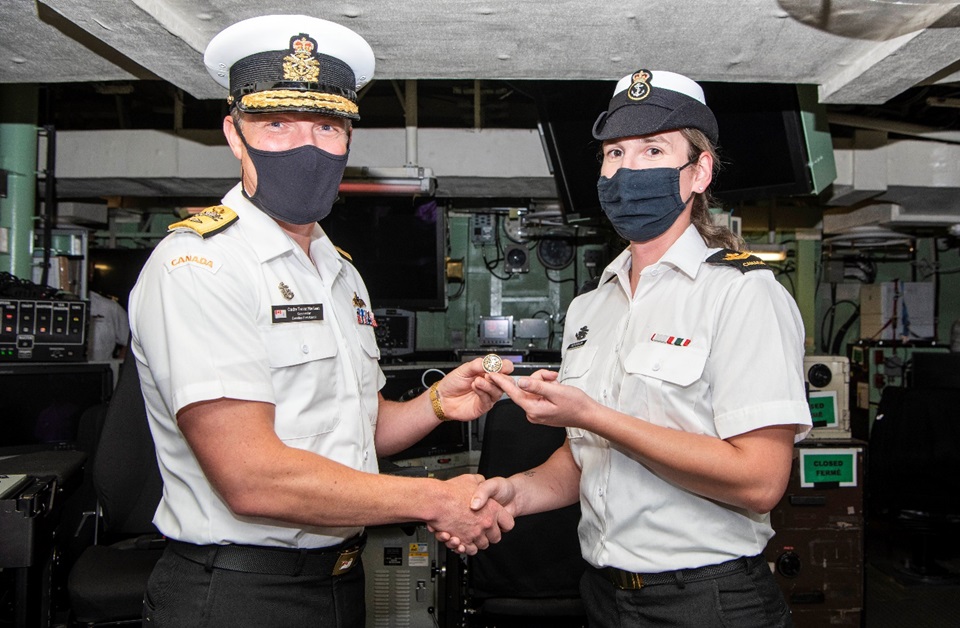 Shipborne air controllers are responsible for the tactical air control of helicopters and fixed wing maritime aircraft assigned to a warship, as well as the care and safety of the ship’s aircrew while under their control.

On September 2, the RCN welcomed its third AOPS into the fleet: HMCS Max Bernays.

Now that Max Bernays has been officially delivered to the RCN, the ship will remain at His Majesty’s Canadian Dockyard Halifax while post-acceptance work and final ship preparations are completed in the coming months. In fall 2023, the ship is expected to participate to Op Nanook 23 and transit to the West Coast through the Northwest Passage to join its homeport of Esquimalt, B.C.

The ship was named in May 2022 after Acting Chief Petty Officer (A/CPO) Max Leopold Bernays who fought in the Battle of the Atlantic during the Second World War. In 1942, A/CPO Bernays stood his post during a close-range attack with an enemy submarine, earning him the Conspicuous Gallantry Medal.

The National Veterans’ Week Speakers Program is looking for Canadian Armed Forces (CAF) members to volunteer as speakers for virtual and in-person presentations.

Every year between November 5 and 11, currently serving CAF members give presentations at schools and community organizations across Canada. These presentations highlight the important work our uniformed personnel do on behalf of Canadians, and pay tribute to past and present veterans who have served their country.

To find out more, visit the program’s intranet site and complete the CAF Speaker registration form. If you have questions, contact the program’s coordinator at 1-833-223-8322 or DNDRemembrance.SouvenirMDN@forces.gc.ca.

Founded in 1999, the forum is a 12-nation partnership focused on improving interoperability for integrated air and missile defence. Its members include Australia, Belgium, Canada, Denmark, France, Germany, Italy, the Netherlands, Norway, Spain, the United Kingdom and the United States.

The forum works closely with NATO, national military commands, acquisitions programs and industry. It has provided the knowledge and capabilities to support the largest and most complex live-fire missile defence exercises ever conducted at sea.

Irving Shipbuilding Inc. has begun cutting steel for the sixth and final AOPS, Robert Hampton Gray, named in honour of the Canadian naval hero of the Second World War.

Lieutenant Gray joined the Royal Canadian Naval Volunteer Reserve in 1940, serving as a pilot and sailor. His courage and spirit earned him the Victoria Cross, making him the only RCN member to be awarded this honour from the Second World War.