The Public Health Agency of Canada was created within the federal Health Portfolio in September 2004. The core mandate of the Agency is to deliver on the Government of Canada's commitment to increase its focus on public health in order to help protect and improve the health and safety of all Canadians and to contribute to strengthening public health capacities across Canada.

The Agency has the responsibility to:

The Agency aims to achieve a strategic outcome of protecting Canadians and empowering them to improve their health by providing strategic policy advice and support to the Minister of Health on a range of program activities, including:

The Agency also delivers a number of grant and contribution programs related to these programs.

Further information on the mandate, roles, responsibilities and program of the Agency can be found in the 2016-17 Report on Plans and Priorities and the 2016-17 Main Estimates.

This quarterly report has been prepared using an expenditure basis of accounting. The accompanying Statement of Authorities (Section 6.0) includes the Agency's spending authorities granted by Parliament, or received from Treasury Board Central Votes, and those used by the Agency consistent with the Main Estimates and Supplementary Estimates for the 2016-17 fiscal year. This quarterly report has been prepared using a special purpose financial reporting framework designed to meet financial information needs with respect to the use of spending authorities

The authority of Parliament is required before moneys can be spent by the Government. Approvals are given in the form of annually approved limits through Appropriation Acts or through legislation in the form of statutory spending authority for specific purposes.

The Agency uses the full accrual method of accounting to prepare and present its annual departmental financial statements that are part of the departmental performance reporting process. However, the spending authorities voted by Parliament remain on an expenditure basis.

This section highlights the significant items that contributed to the net increase in resources available for the year as well as decrease in actual expenditures for the third quarter of 2016-17, ending December 31, 2016.

The following graph provides a comparison of the net budgetary authorities and expenditures as of December 31, 2015 and December 31, 2016 for the Agency's combined Vote 1, Vote 5, Vote 10 and Statutory Votes. 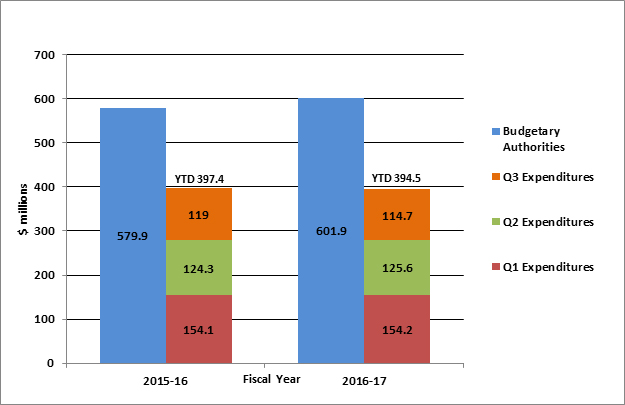 The Agency's Vote 1 increased by $9 million or 2.7% mainly due to the following:

The increase of $0.7 million or 1.5% in 2016-17 is, for the most part, related to the Employee Benefit Plans (EBP) costs associated with the change in the Agency budgetary requirements for salary.

This overall decrease in spending is a combination of the following:

The Agency's Vote 1 third quarter 2016-17 expenditures increased by $11.9 (19.9%) million over the same quarter in 2015-16 mainly due to funding for medical countermeasures, timing issues on an installment payment to Health Canada through the Shared Services Partnership Agreement, and due to the newly implemented advanced billing model for legal services and other minor increases.

The Agency's Vote 5 third quarter 2016-17 expenditures increased by $0.5 million over the same quarter in 2015-16 mainly due to timing of purchases for the National Microbiology Lab in the third quarter of 2016-17.

The Agency's Budgetary Statutory Expenditures decreased by $0.8 million over the same quarter in 2015-16 mainly due to a 26.8% decrease in respendable revenues in the third quarter of 2016-17. The Agency charged $2.6 million to Health Canada under the Shared Services Partnership Framework Agreement for the third quarter compared to $3.5 million in the same quarter of 2015-16

The dominant financial risks faced by the Agency relate to the nature of its mandate and the need to respond to unforeseeable events such as an influenza pandemic. Significant surge capacity would need to be activated in these instances.

To manage this financial risk, the Agency continues to strengthen its preparation and responsiveness to public health emergencies and public health capacity. In an emergency situation, the Agency would first consider internal re-allocation of resources in order to address unforeseeable events. The federal government also has systems and processes in place for departments to access funds, should an emergency arise.

There have been no significant changes in relation to operations, personnel and programs during this quarter.

Public Health Agency of Canada
For the quarter ended December 31, 2016

Public Health Agency of Canada
For the quarter ended December 31, 2016