This booklet answers these questions: 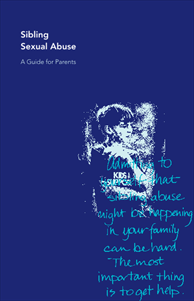 This booklet is written for parents who know or suspect there is sibling abuse in their family and want to do something about it. It's also written for parents who want to understand and prevent sibling sexual abuse. Many parents are afraid to believe that sexual abuse could be possible in their family, and this booklet is meant to support parents in facing that possibility in an informed way.

What is sibling sexual abuse?

In this booklet the word "sibling" is used to refer to children who grow up in the same family, whether they are step-children, foster children, adopted children or children by birth. Natural and healthy sexual exploration between children of similar age, size and developmental stage and sexual play that is mutual, voluntary and not coercive, is not sibling abuse. Sibling sexual abuse, or incest, can involve a brother and sister, two sisters or two brothers but abuse by an older brother against a younger sister is the most common form. (Gaffast Conn-Caffrey, 1998).

What are the effects of sibling sexual abuse?

It can be very upsetting to find out that sexual abuse is happening in your family.

If you know or suspect that one of your children is being sexually abused by a sibling, do something. If you do nothing because you believe "they'll grow out of it", you are allowing the abuse and secrecy to continue.

Is sexual curiosity between siblings normal?

Yes. A four-year-old girl who touches her baby brother's penis while her mother changes his diaper is showing normal curiosity. She may never have seen a penis before and may want to know what it feels like. A five year old boy who sees his sister's genitals for the first time may wonder where her penis is, whether she's lost it and whether she's going to grow one. He may have to look a few more times, and ask questions to understand that boys and girls are born with different genitals. As a parent you can use opportunities like these to give your children some information about sexuality that is suitable for their age.

However, a fourteen-year-old boy who wants to look at his five-year-old sister's genitals is not showing normal curiosity. You need to ask why he wants to do this. It could be that he's wondering what it would feel like to touch female genitals or rub his penis against them. But to satisfy his curiosity in this way with his young sister would be abusive.

Four- and five-year-olds who take down their pants to look at each other's genitals are probably curious. But if they persist in doing it, or if they touch one another's genitals frequently over time, you should intervene. If it seems like more than curiosity, consider the possibility that one of them might have been exposed to adult sexual behaviour or graphic sexual images through pornography or may have been sexually abused, and are acting out what they have seen or experienced.

It's not a good idea to think all play is harmless. It's better to try to find out what's behind the behaviour. Repetitive play can be a sign the child feels distressed.

Some questions you could ask yourself, or a professional, are:

Here are some examples of behaviours in pre-school children:

There are many benefits of court ordered counselling for the sibling abuser, such as learning to take responsibility for one's behaviour and learning to control it.

If you aren't sure about a behaviour, ask a professional: a doctor, a school nurse or counsellor, a social worker, a daycare supervisor or a child psychologist. There is also another booklet, available in this series that could be helpful: When Children Act Out Sexually: A Guide for Parents and Teachers.

What is the relationship between sibling sexual abuse and other forms of abuse?

Sibling sexual abuse is a misuse of power and authority. Older children who sexually abuse their younger brothers and sisters frequently abuse them in other ways as well.

Much of the hitting, pinching and smothering of younger children is dismissed by bigger or older siblings who tell their parents, "We were only having fun" or "We were just wrestling." However, this isn't "just fun" if it's forced on the younger child, it is actually physical abuse.

Frank was charged under the Youth Criminal Justice Act for sexually abusing his younger sister Kathy. His probation officer enforced the court order that he attend counselling.

Frank, who was 15, told his counsellor that his classmates were bigger and more sexually "successful" than he was, and that one of them had dared him to have sex with a girl.

He said that he was afraid to even talk to a girl, let alone ask for a date. He admitted that he made his younger sister Kathy have sexual intercourse with him one evening when he was babysitting her.

Then Frank's mother told the counsellor that Frank's father had forced sex on her in front of the children on a number of occasions. She disclosed that he often beat her if his meals weren't ready on time. The counsellor encouraged her to take Frank and Kathy to a transition house as a temporary measure, while she decided whether or not to stay with her husband.

There were several factors involved in Frank becoming a sibling sexual abuser. His father abused his mother physically, emotionally and sexually; he abused Frank emotionally by having forceful, abusive sex with his mother in front of him; and he taught Frank by his example that it was acceptable for a male in authority to use force on the rest of the family. Not only that, his rules for the family were so strict that Frank hadn't learned to socialize with other teenagers. Feeling pressure from his peers, he tried to get information and experience by forcing himself on his younger sister.

There are many benefits to court-ordered counselling for sibling sexual abusers. In Frank's case he learned some social skills that helped him get along better with other teenagers, and he stopped copying his father's abusive behaviour. He also learned to take responsibility for his own behaviour and to control it. Other outcomes of the family crisis included his mother being able to leave an abusive relationship and Kathy starting to see a sexual abuse counsellor. Following his conviction, Frank's father was charged by the court to seek counselling to change the way he treats women and children.

There is no single cause of sibling sexual abuse, but there are several contributing factors. Some of these factors are:

Why might it be difficult to recognize sibling sexual abuse in my family?

Admitting to yourself that sibling sexual abuse might be happening in your family can be hard. Admitting it to someone else can be even harder. The important thing is to get help.

As a parent you might find it hard to see that one of your children is being sexually abused by a sibling. There are several reasons why parents of sibling sexual abuse victims have difficulty recognizing that it's happening:

Parents who talk to their children about what has happened during the day and who ask about their feelings may be more likely to recognize sibling sexual abuse than parents who don't have these kinds of discussions with their children.

If one of my children is abusing another child in my family, what should I do?

Admitting to yourself that sibling sexual abuse might be happening in your family can be hard. Admitting it to someone else can be even harder. The important thing is to get help. It is often helpful to get support from family and friends, but you might have to rely on others. Often these others are professionals. As a parent you may feel in a state of despair and confusion when you realize that one of your children is abusing their sibling. You may feel disappointed and may feel that you have failed as a parent. Joining a parent support group may help you acknowledge and accept your feelings.

No matter what your child's age, there are options as to what happens after you make the report to your child protection agency:

Many counselling centres that treat victims of sexual abuse also have programs for children with sexual touching problems. These are children who have been acting in sexually aggressive ways towards other children, but are under the age of 12. In many cases these children are sexual abuse victims themselves. They need counselling to change their behaviour towards other children and to help them heal from the abuse they have experienced themselves.

There are several advantages to involving the police and the criminal justice system when the abuser is a child over the age of 12. By using the court system:

Treatment can take many forms. One option could include placing a teenage sibling sexual abuser on probation with an order to have counselling while living at home. In this case the teenager will have a probation worker who will make sure the judge's orders are followed.

Depending on the severity of the offences the teenage abuser could be confined for a period of time in a detention centre. These centres are staffed by counsellors and social workers who specialize in treating adolescent sexual abusers. Treatment could include attending groups where the abuser looks closely at his/her behaviour and receives individual counselling to help understand the behaviour. The abuser may also be taught basic social skills, such as how to make friends his/her own age, or how to ask for a date and learn appropriate sexual behaviour. Most importantly, counselling can help prevent the young abuser from growing into an adult offender.

After reporting the abuse, counselling for both the offender and the victim(s) can be an important step for healing in your family.

If the province where you live has a victim assistance program, the victim(s) of sibling sexual abuse might be eligible for free counselling. A police officer, social worker or a victim services worker should be able to give you this information. After reporting the abuse, counselling for both the abuser and the victim(s) can be an important step to healing in your family.

Jamie, 11, became sexually excited by watching a rock video. He wondered what it would be like to watch his younger sister, Carole-Anne, dance in the nude. Two or three times when his parents were out for the evening he talked her into taking off her clothes and dancing in front of the television set. Then he told her that one day she'd be a great dancer and a rock star. After that Carole-Anne started running in front of the television set all the time just to get his attention. When Jamie complained that Carole-Anne was a nuisance, Carole-Anne told her mother what Jamie had made her do. Her mother recognized that Jamie's behaviour had been abusive.

How can I intervene to stop sibling sexual abuse?

Will our family ever recover?

Teach your children that they own their bodies and everyone should respect that.

YES! Even if the abuse went on for a long time, your children can heal and move on. They'll need love and understanding, and help in sorting out their thoughts and feelings.

All families have periods when one or more members have problems. What makes the difference is whether you work on the problems. The communication and support you develop while you do this may establish a new sense of trust in your family.

How can I best prevent sibling sexual abuse in my family?

The best way to prevent sibling sexual abuse is to pay attention to your children:

Yes! Even if the abuse went on for a long time, your children can get over it!

Additional resources are available at your community resource centre, your local library or the Stop Family Violence.