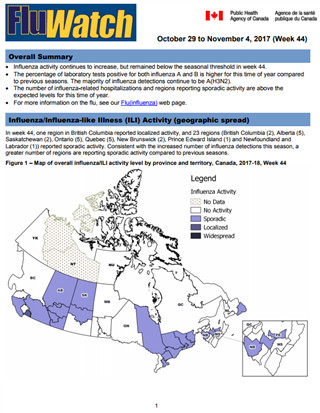 In week 44, the number of both influenza A and B detections increased, although the percentage of tests positive for influenza remained similar to the previous week at 4.5%, which is below the seasonal threshold. The number and percentage of both influenza A and B tests positive is higher for this time of year than was observed during the previous seven seasons. For data on other respiratory virus detections, see the Respiratory Virus Detections in Canada Report.

To date this season, 900 laboratory-confirmed influenza detections have been reported, of which 88% have been influenza A. Influenza A(H3N2) has been the most common subtype detected this season, representing 94% of subtyped influenza A detections. For more detailed weekly and cumulative influenza data, see the text descriptions for Figures 2 and 3 or the Respiratory Virus Detections in Canada Report.

In week 44, 1.6% of visits to healthcare professionals were due to influenza-like illness; a slight decrease compared to the previous week, but remains slightly above the 5-year average.

In week 44, 1351 participants reported to FluWatchers, of which 1% reported symptoms of cough and fever in the preceding week and 20% of these consulted a healthcare professional. Among participants who reported cough and fever, 75% reported days missed from work or school, resulting in a combined total of 34 missed days.

In week 44, one new laboratory-confirmed influenza outbreak was reported in a long-term care facility.

To date this season, 18 influenza/ILI outbreaks have been reported, of which 8 occurred in LTC facilities. Among the 12 outbreaks for which the influenza type/subtype was reported, 9 were associated with influenza A. The number of outbreaks to date is within the expected range for this time of year.

In week 44, 15 influenza-associated hospitalizations were reported by participating provinces and territoriesFootnote 1.

To date this season, 159 influenza-associated hospitalizations have been reported, 93% of which were associated with influenza A, and 115 cases (72%) were in adults 65 years of age or older. The number of cases is considerably elevated relative to this period in the previous two seasons. Eight ICU admissions and eight deaths have been reported.

In week 44, one laboratory-confirmed influenza-associated pediatric (≤16 years of age) hospitalization was reported by the Immunization Monitoring Program Active (IMPACT) network.

To date this season, 17 pediatric hospitalizations have been reported by the IMPACT network, 14 of which were associated with influenza A. Six ICU admissions and no deaths have been reported. The number of hospitalizations reported this season has been similar compared to the same period in recent seasons in which influenza A(H3N2) was the predominant circulating subtype (2014-15, 2016-17).

During the 2017-18 influenza season, the National Microbiology Laboratory (NML) has characterized 52 influenza viruses [41 A(H3N2), 5 A(H1N1)pdm09 and 6 B viruses] that were received from Canadian laboratories.

Additionally, of the seven influenza A(H3N2) viruses that were characterized antigenically as similar to A/Hong Kong/4801/2014, six belonged to genetic group 3C.2a and one virus belonged to subclade 3C.2a1.

During the 2017-18 season, the National Microbiology Laboratory (NML) has tested 50 influenza viruses for resistance to oseltamivir and zanamivir, and all viruses were sensitive (Table 4).