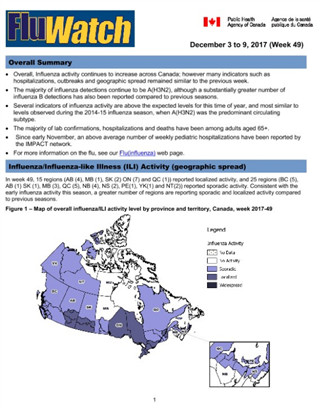 In week 49, both influenza A and B detections continued to increase, with 17.7% of tests positive for influenza. The number (863) and percentage (13.6%) of influenza A detections for week 49 are above average but within expected levels. The number (258) and percentage of tests (4.1%) positive for influenza B in week 49 are well above expected levels. Current levels of influenza B detections are not typically seen until mid-February. For data on other respiratory virus detections, see the Respiratory Virus Detections in Canada Report.

To date this season, 4,135 laboratory-confirmed influenza detections have been reported, of which 81% have been influenza A. Influenza A(H3N2) has been the most common subtype detected this season, representing 95% of subtyped influenza A detections. For more detailed weekly and cumulative influenza data, see the text descriptions for Figures 2 and 3 or the Respiratory Virus Detections in Canada Report.

To date this season, detailed information on age and type/subtype has been received for 3,809 laboratory-confirmed influenza cases (Table 1). Among all influenza cases with reported age and type/subtype information, 42% have been reported in adults 65 years of age and older. Among cases of influenza A(H3N2), adults aged 65+ represented 52% of cases, compared to 38% and 43% of cases reported at week 49 in the 2016-17 and 2014-15 season respectively.

In week 49, 1.8% of visits to healthcare professionals were due to influenza-like illness; a decrease compared to the previous week, and above the 5-year average.

In week 49, 69 influenza-associated hospitalizations were reported by participating provinces and territories.

To date this season, 704 influenza-associated hospitalizations have been reported, 89% of which were associated with influenza A, and 490 cases (70%) were in adults 65 years of age or older. The number of cases is considerably elevated relative to this period in the previous two seasons. To date, 47 ICU admissions and 19 deaths have been reported.

In week 49, 31 laboratory-confirmed influenza-associated pediatric (≤16 years of age) hospitalizations were reported by the Immunization Monitoring Program Active (IMPACT) network. Of the 31 hospitaliations, 25 (81%) were due to influenza A(H3N2). Since week 45, the number of hospitalizations reported each week has been above the seven-season weekly averages.

To date this season, 91 pediatric hospitalizations have been reported by the IMPACT network, 76 of which were associated with influenza A. Eighteen ICU admissions and fewer than five deaths have been reported. Compared to recent influenza A(H3N2) seasons at week 49, the number of hospitalizations reported this season have been greater than the 2016-17 and 2012-13 seasons, and similar to the 2014-15 season.

During the 2017-18 influenza season, the National Microbiology Laboratory (NML) has characterized 168 influenza viruses [131 A(H3N2), 10 A(H1N1)pdm09 and 27 B viruses] that were received from Canadian laboratories.

Additionally, of the 31 influenza A(H3N2) viruses that were characterized antigenically as similar to A/Hong Kong/4801/2014, 27 belonged to genetic group 3C.2a and three viruses belonged to subclade 3C.2a1. Sequencing is pending for the remaining 1 isolate.

Of the four viruses characterized as having reduced titer to ferret antisera produced against cell-propagated B/Brisbane/60/2008, sequence analysis showed that two of 4 viruses had a two amino acid deletion in the HA gene. Sequence is pending for the remaining two viruses.

During the 2017-18 season, the National Microbiology Laboratory (NML) has tested 169 influenza viruses for resistance to oseltamivir and zanamivir, and all viruses were sensitive (Table 4).