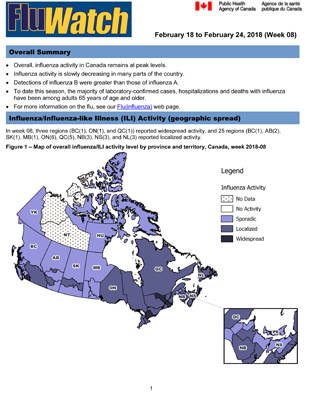 The percentage of influenza A detections for week 08 are below average but remain within the expected range for this time of year. The percentage of tests positive for influenza B in week 08 continues to be well above expected levels for this time of year. For data on other respiratory virus detections, see the Respiratory Virus Detections in Canada Report.

To date this season, 44,497 laboratory-confirmed influenza detections have been reported, of which 59% have been influenza A. Influenza A(H3N2) has been the most common subtype detected this season, representing 93% of subtyped influenza A detections. For more detailed weekly and cumulative influenza data, see the text descriptions for Figures 2 and 3 or the Respiratory Virus Detections in Canada Report.

In week 08, 3.0% of visits to healthcare professionals were due to influenza-like illness (ILI); an increase compared to the previous week, and above the 5-year average.

To date this season, 3,584 influenza-associated hospitalizations were reported by participating provinces and territories1. Among the hospitalizations, 2,702 (75%) were associated with influenza A, and 2,434 cases (68%) were in adults 65 years of age or older.

Additionally, 126 ICU admissions and eight deaths have been reported to date. Children aged 0-23 months accounted for the greatest proportion of ICU cases (29%). Among the ICU cases with available information, 66% were due to influenza A and approximately 43% had no reported previous or concurrent medical conditions. All reported deaths were among children over the age of two.

During the 2017-18 influenza season, the National Microbiology Laboratory (NML) has characterized 1,917 influenza viruses [981 A(H3N2), 98 A(H1N1)pdm09 and 838 B viruses] that were received from Canadian laboratories.

Among the viruses characterized antigenically as having reduced titer to ferret antisera produced against cell-propagated B/Brisbane/60/2008, sequence analysis showed that all 28 viruses had a two amino acid deletion in the HA gene. Sequencing is pending for the two remaining virus isolates.

During the 2017-18 season, the National Microbiology Laboratory (NML) has tested 852 influenza viruses for resistance to oseltamivir and 848 viruses for resistance to zanamivir. All but one of the A(H1N1) viruses were sensitive to oseltamivir and all but one influenza B viruses were sensitive to zanamivir (Table 4).