In weeks 39-40, approximately half of regions in reporting provinces and territories indicated some influenza or influenza-like illness activity. In week 40, two regions (one in Alberta and one in Ontario) reported localized activity, and 20 regions (British Columbia (4), Alberta (4), Saskatchewan (1), Ontario (4), Quebec (4), New Brunswick (1) , Newfoundland (1) and Yukon (1)) reported sporadic activity. Consistent with the increased number of influenza detections this season, a greater number of regions are reporting sporadic activity compared to previous seasons. 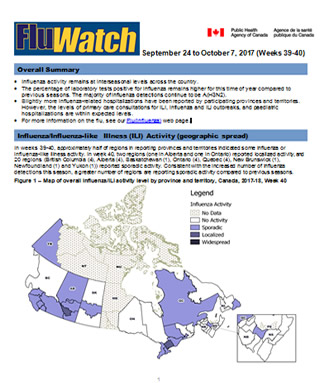 In weeks 39-40, the number of tests positive for influenza remained at interseasonal levels. The percentage of tests positive was low and increased only slightly compared to the previous 2-week period (2.6% in week 40). The number and percentage of influenza A tests positive remains higher for this time of year than was observed during the previous seven seasons. Influenza B detections remain low and in keeping with previous seasons. For data on other respiratory virus detections, see the Respiratory Virus Detections in Canada Report.

To date this season, 330 laboratory-confirmed influenza detections have been reported, of which 91% have been influenza A. Influenza A(H3N2) has been the most common subtype detected this season, representing 88% of subtyped influenza A detections. Detections from BC and AB represent 64% of the cases reported in this 2-week period, with a further 31% from Ontario and Quebec. For more detailed weekly and cumulative influenza data, see the text descriptions for Figures 2 and 3 or the Respiratory Virus Detections in Canada Report.

In week 40, 1.3% of visits to healthcare professionals were due to influenza-like illness, which is increased slightly compared to the previous 2-week period and in keeping with previous seasonal levels.

To date this season, five laboratory-confirmed influenza-associated pediatric (≤16 years of age) hospitalizations have been reported by the Immunization Monitoring Program Active (IMPACT) network, all of which were associated with influenza A.

During the 2017-18 influenza season, the National Microbiology Laboratory (NML) has characterized 21 influenza viruses [12 A(H3N2), 5 A(H1N1)pdm09 and 4 B viruses] that were received from Canadian laboratories.

Of the four influenza A (H3N2) viruses that were characterized antigenically as similar to A/Hong Kong/4801/2014, three belonged to genetic group 3C.2a and sequencing is pending for the remaining isolate.

During the 2017-18 season, the National Microbiology Laboratory (NML) has tested 23 influenza viruses for resistance to oseltamivir and zanamivir, and all viruses were sensitive (Table 3)