During week 36, the following influenza activity levels were reported (Figure 1): 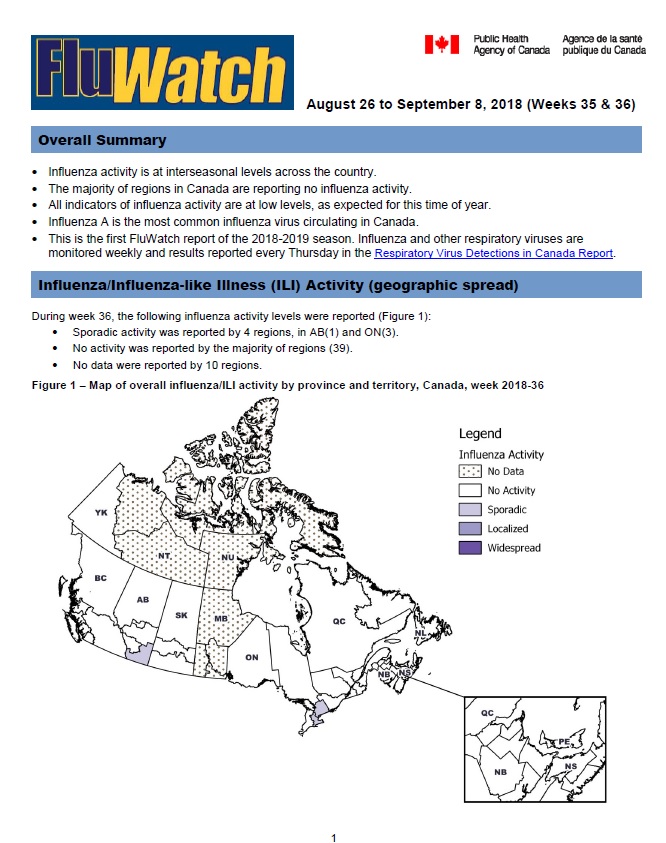 In weeks 35 and 36, the following results were reported from sentinel laboratories across Canada (Figure 2 and Figure 3):

To date this season, detailed information on age and type/subtype has been received for >14 laboratory-confirmed influenza cases (Table 1).

In week 36, 0.9% of visits to healthcare professionals were due to influenza-like illness (ILI) (Figure 4). The percentage of visits for ILI is at interseasonal levels.

FluWatchers is a participatory ILI surveillance system that relies on weekly voluntary submissions of syndromic information from Canadians across Canada. To learn more about the FluWatchers program.

In weeks 35 and 36 no influenza-associated hospitalizations were reported by participating provinces and territoriesFootnote 1.

The National Microbiology Laboratory has not yet reported influenza strain characterization results for influenza viruses collected during the 2018-19 season.

The National Microbiology Laboratory has not yet reported antiviral resistance results for influenza viruses collected during the 2018-19 season.