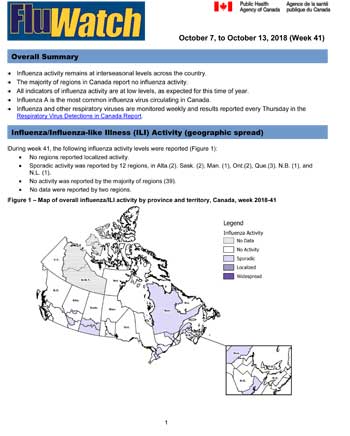 During week 41, the following influenza activity levels were reported (Figure 1):

In week 41, the following results were reported from sentinel laboratories across Canada (Figure 2 and Figure 3):

To date this season 182 laboratory-confirmed influenza detections have been reported (Figure 3):

To date this season, detailed information on age and type/subtype has been received for 124 laboratory-confirmed influenza cases (Table 1):

In week 41, 1.5% of visits to healthcare professionals were due to influenza-like illness (ILI) (Figure 4). The percentage of visits for ILI is at interseasonal levels.

Among the 48 participants who reported fever and cough:

To date this season, 16 influenza-associated hospitalizations were reported by participating provinces and territoriesFootnote 1.

To date this season <5 ICU admissions and <5 deaths have been reported.

To date this season, <5 pediatric hospitalizations have been reported by the Immunization Monitoring Program Active (IMPACT) network.

Since September 1, 2018, the National Microbiology Laboratory (NML) has characterized 5 influenza viruses (2 A(H3N2) and 3 A(H1N1)) that were received from Canadian laboratories.

Four influenza A (2 A(H3N2) and 2 A(H1N1)) viruses were tested for resistance to amantadine and it was found that:

Five influenza viruses (2 A(H3N2) and 3 A(H1N1)) were tested for resistance to oseltamivir and it was found that:

Five influenza viruses (2 A(H3N2) and 3 A(H1N1)) were tested for resistance to zanamivir and it was found that: