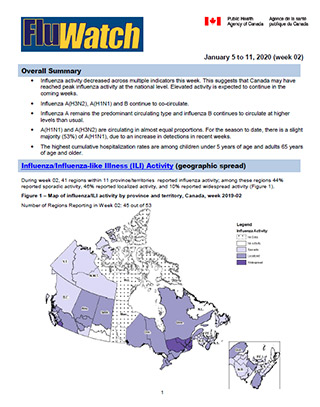 To date this season (weeks 35 to 02), 16,438 laboratory detections of influenza were reported:

Detailed information on age and type/subtype has been received for 12,168 laboratory-confirmed influenza cases (Table 1). To date this season (weeks 35 to 02):

In week 02, 1.8% of visits to healthcare professionals were due to influenza-like illness (ILI) which is below the average for this time of year (Figure 4).

Among the 94 participants who reported cough and fever:

In week 02, the number of new laboratory-confirmed influenza outbreaks decreased. A total of 81 outbreaks were reported: 52 in long term care facilities, 8 in acute care facilities categorized as 'other', which includes facilities such as private personal care homes, correctional facilities, and colleges/universities (Figure 6).

To date this season, 802 influenza-associated hospitalizations were reported by participating provinces and territoriesFootnote †.

Eighty-one ICU admissions and thirteen deaths have been reported.

In week 02, 99 pediatric (≤16 years of age) laboratory-confirmed influenza-associated hospitalizations were reported by the Immunization Monitoring Program Active (IMPACT) network (Figure 8). The weekly number of cases in this period above the 5-year maximum in week 02.

The sharp increase in the number of cases in recent weeks is likely due to the concurrent circulation of influenza A and B this season. The number of influenza A-associated pediatric hospitalizations is similar to the average for this time of year. Influenza B usually circulates later in the season, in February or March. However, this season, the number of hospitalizations with influenza B is well above average compared to previous seasons, and occurring earlier in the season.

Surveillance of laboratory-confirmed influenza-associated adult (≥16 years of age) hospitalizations by the Canadian Immunization Research Network (CIRN) Serious Outcomes Surveillance (SOS) network began on November 1st  for the 2019-20 season. In week 02, the number of cases decreased compared to the previous week.