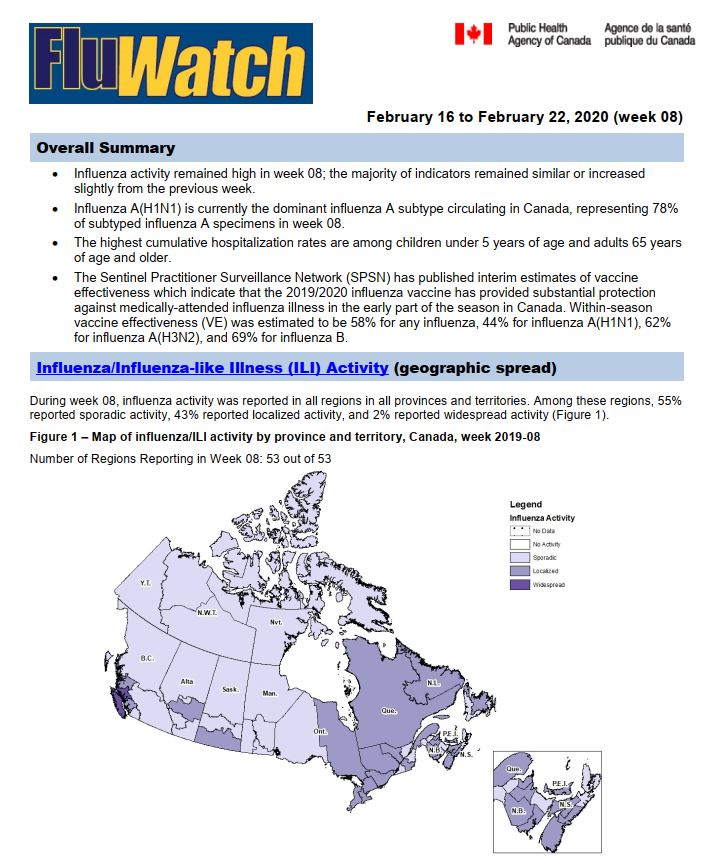 During week 08, influenza activity was reported in all regions in all reporting provinces and territories. Among these regions, 55% reported sporadic activity, 43% reported localized activity, and 2% reported widespread activity (Figure 1).

In week 08, the percentage of laboratory tests positive for influenza was similar to the previous three weeks at 29% and remains similar to the peak percentages reported since late December. Influenza A and B continue to co-circulate.

To date this season (weeks 35 to 08), 42,291 laboratory detections of influenza were reported

Detailed information on age and type/subtype has been received for 32,801 laboratory-confirmed influenza cases (Table 1). To date this season (weeks 35 to 08):

In week 08, 1.5% of visits to healthcare professionals were due to influenza-like illness (ILI) which is below the average for this time of year (Figure 4).

Among the 86 participants who reported cough and fever:

To date this season, 1,795 influenza-associated hospitalizations were reported by participating provinces and territories1.

211 ICU admissions and 74 deaths have been reported.

In week 08, 84 pediatric (≤16 years of age) laboratory-confirmed influenza-associated hospitalizations were reported by the Immunization Monitoring Program Active (IMPACT) network (Figure 8). The number of cases due to influenza B remains high; however, in recent weeks, a growing proportion of cases have been due to influenza A.
The elevated number of cases this season compared to previous seasons is likely due to the concurrent circulation of influenza A and B. The number of influenza A-associated pediatric hospitalizations is above the average for this time of year which is expected when A(H1N1) is the predominant circulating virus. The number of hospitalizations with influenza B remains well above average compared to previous seasons.
To date this season (weeks 35 to 08):

To date this season, 627 hospitalizations, 60 intensive care unit admissions, and 28 deaths have been reported (Figure 10).

Sequence analysis of 150 B/Victoria lineage viruses with reduced titre to B/Colorado/06/2017 showed that 100% had a three amino acid deletion (162-164) in the HA gene and belong to the genetic subclade V1A-3Del. Sequencing is pending for the remaining viruses.