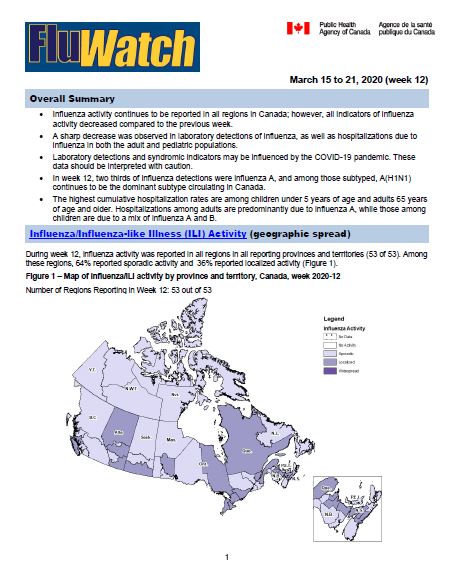 During week 12, influenza activity was reported in all regions in all reporting provinces and territories (53 of 53). Among these regions, 64% reported sporadic activity and  36% reported localized activity (Figure 1).

In week 12, the percentage of laboratory tests positive for influenza continued to decrease sharply to 7%. Testing for influenza and other respiratory viruses may be influenced by the current COVID-19 pandemic. Changes in laboratory testing practices in the coming weeks may affect the comparability of data to previous weeks or previous seasons. In weeks 10-12, influenza circulation has decreased significantly more rapidly than is usually observed at this time of year.

To date this season (weeks 35 to 12), all influenza types and subtypes have circulated. Among the 54,155 laboratory detections of influenza reported:

Detailed information on age and type/subtype has been received for 41,981 laboratory-confirmed influenza cases (Table 1). To date this season (weeks 35 to 12):

In week 12, 1.5% of visits to healthcare professionals were due to influenza-like illness (ILI) which is a slight decrease from the previous week and around average for this time of year (Figure 4). This trend should be interpreted with caution as there was a sharp decrease in the number of sentinels reporting this week. Given the evolving Canadian situation with COVID-19, we will continue to monitor this indicator closely.

The proportion of FluWatchers participants reporting symptoms of cough and fever decreased in week 12 compared to the previous week.

Among the 48 participants who reported cough and fever:

In week 12, a total of 14 outbreaks were reported: 10 in long term care facilities and four in facilities s categorized as ‘other', which includes facilities such as private personal care homes, correctional facilities, and colleges/universities (Figure 6).

To date this season, 2,324 influenza-associated hospitalizations were reported by participating provinces and territories Footnote 1.

283 ICU admissions and 102 deaths have been reported.

In week 12, 26 pediatric (≤16 years of age) laboratory-confirmed influenza-associated hospitalizations were reported by the Immunization Monitoring Program Active (IMPACT) network (Figure 8). Since the beginning of March, the weekly number of reported cases have dropped below the 5-year weekly average.

Surveillance of laboratory-confirmed influenza-associated adult (≥16 years of age) hospitalizations by the Canadian Immunization Research Network (CIRN) Serious Outcomes Surveillance (SOS) network began on November 1st  for the 2019-20 season. In week 12, the number of cases declined sharply for the third week in a row.

To date this season, 772 hospitalizations, 84 intensive care unit admissions, and 41 deaths have been (Figure 10).