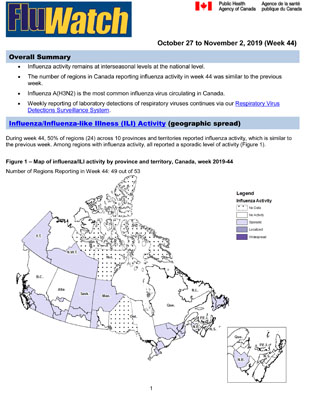 In week 44, the number of detections of influenza continued to increase slowly. The following results were reported from sentinel laboratories across Canada (Figures 2 and 3):

To date this season (weeks 35 to 44), 563 laboratory detections of influenza were reported:

Detailed information on age and type/subtype has been received for more than 425 laboratory-confirmed influenza cases (Table 1). (The total number of cases is suppressed due to small values in Table 1).

In week 44, 1.0%, of visits to healthcare professionals were due to influenza-like illness (ILI) which is slightly below the average for this time of year (1.3%) (Figure 4).

In week 44, one new outbreak was reported in a facility type categorized as ‘other’, which includes facilities such as private personal care homes, correctional facilities, colleges/universities etc. (Figure 6).

To date this season, a total of 10 laboratory-confirmed influenza outbreaks have been reported; six in long-term care facilities, one in an acute care facility and three in a facility type categorized as ‘other’. Of the outbreaks where influenza type was reported, nine out of ten were due to influenza A. One ILI outbreak in a school/daycare has also been reported

To date this season. 45 influenza-associated hospitalizations were reported by participating provinces and territoriesFootnote 1.

Five ICU admissions and no deaths have been reported.

Number of provinces and territories reporting in week 44: 9 out of 9

To date this season, 11 pediatric hospitalizations have been reported by the IMPACT network; seven cases associated with influenza A and four with influenza B.

Surveillance of laboratory-confirmed influenza-associated adult (≥16 years of age) hospitalizations by the Canadian Immunization Research Network (CIRN) Serious Outcomes Surveillance (SOS) network began on November 1st for the 2019-20 season. Data will be included in the next FluWatch report (week 45).

From September 1 to November 7, 2019, the National Microbiology Laboratory (NML) has characterized 28 influenza viruses (16 A(H3N2), 5 A(H1N1) and 7 influenza B) that were received from Canadian laboratories.

All 16 A(H3N2) viruses this season have been genetically characterized, based on sequence analysis of the HA gene.

Of the seven influenza B viruses antigenically characterized this season: