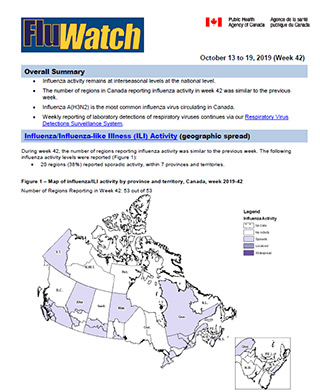 In week 42, detections of influenza continued to increase. The following results were reported from sentinel laboratories across Canada (Figures 2 and 3):

To date this season (weeks 35 to 42), 358 laboratory detections of influenza were reported:

Detailed information on age and type/subtype has been received for 263 laboratory-confirmed influenza cases. To date this season (weeks 35 to 42):

In week 42, 1.4%, of visits to healthcare professionals were due to influenza-like illness (ILI) which is similar to the average for this time of year (Figure 4). 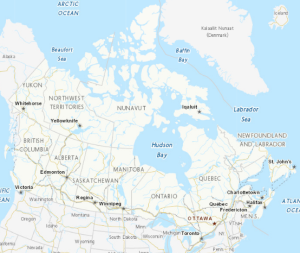 In week 42, no new outbreaks were reported.

To date this season, a total of 7 laboratory-confirmed influenza outbreaks have been reported; six in long-term care facilities and one in another type of facility. All reported outbreaks were due to influenza A. Two ILI outbreaks in schools and daycares have also been reported.

Number of provinces and territories reporting in week 42: 13 out of 13

In week 42, six influenza-associated hospitalizations were reported by participating provinces and territoriesFootnote 1.

To date this season. 28 influenza-associated hospitalizations were reported by participating provinces and territoriesFootnote 1.

Number of provinces and territories reporting in week 42: 9 out of 9

To date this season, seven pediatric hospitalizations have been reported by the IMPACT network; four cases associated with influenza A and three with influenza B.

From September 1 to October 24, 2019, the National Microbiology Laboratory (NML) has characterized 14 influenza viruses (9 A(H3N2), 1 A(H1N1) and 4 influenza B) that were received from Canadian laboratories.

All nine A(H3N2) viruses this season have been genetically characterized, based on sequence analysis of the HA gene.