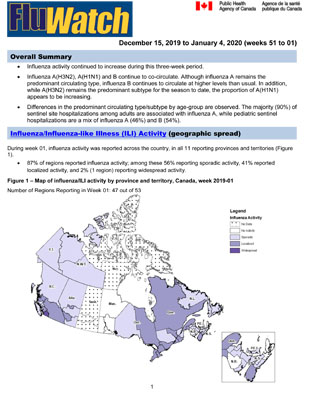 During week 01 influenza activity was reported in 11 provinces and territories (Figure 1).

To date this season (weeks 35 to 01), 12,547 laboratory detections of influenza were reported:

Detailed information on age and type/subtype has been received for 10,404 laboratory-confirmed influenza cases (Table 1). To date this season (weeks 35 to 01):

Over the three-week period of weeks 51, 52, and 01, the percentage of visits to healthcare professionals due to influenza-like illness (ILI) continued to increase to 3.0% in week 01 which is slightly below the average for this time of year (3.4%) (Figure 4).

Among the 135 participants who reported cough and fever:

To date this season, 560 influenza-associated hospitalizations were reported by participating provinces and territoriesFootnote †.

Sixty ICU admissions and ten deaths have been reported.

Over the three-week period of weeks 51, 52 and 01, 258 pediatric (≤16 years of age) laboratory-confirmed influenza-associated hospitalizations were reported by the Immunization Monitoring Program Active (IMPACT) network (Figure 8). The weekly number of cases in this period is above the average over the previous five seasons, and above the 5-year maximum in week 52 and week 01.

The sharp increase in the number of cases in recent weeks is likely due to the concurrent circulation of influenza A and B this season. The number of influenza A-associated pediatric hospitalizations is similar to the average for this time of year. Influenza B usually circulates later in the season, in February or March. However, this season, the number of hospitalizations with influenza B is well above average compared to previous seasons, and occurring earlier in the season.