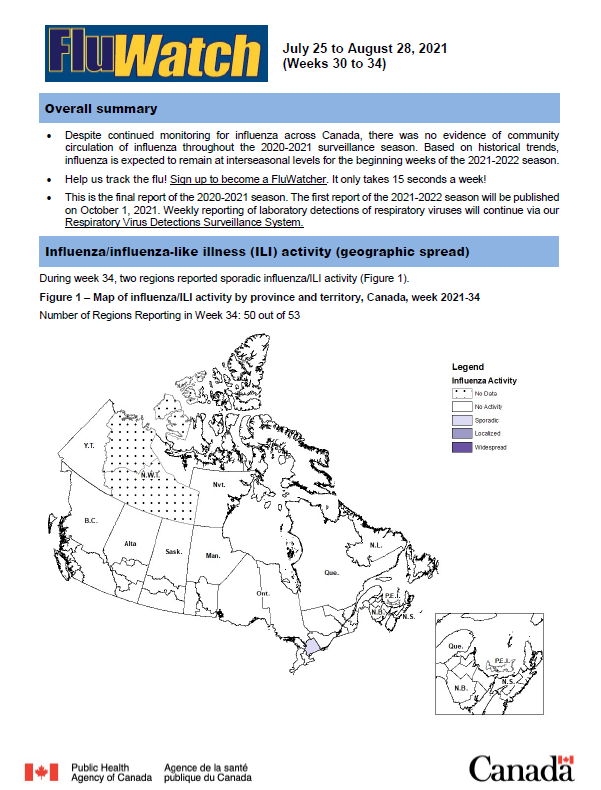 Thirty-one of the influenza detections reported to date this season are known to be associated with recent live attenuated influenza vaccine (LAIV) receipt and do not represent community circulation of seasonal influenza viruses. LAIV strains are attenuated but can be recovered by nasal swab in children and adults following vaccination with that product (i.e., "shedding"). For more information, please refer to the Canadian Immunization Guide Chapter on Influenza and Statement on Seasonal Influenza Vaccine for 2020–2021 (Section IV.2). Four of the influenza detections reported to date this season were sporadic detections of swine variant influenza A viruses: one influenza A(H1N1)v, two influenza A(H1N2)v and most recently in week 23, one influenza A(H3N2)v.  These variant viruses differ from the influenza strains responsible for seasonal influenza epidemics. They are usually acquired through direct or indirect contact with swine and do not spread easily from person to person.

All provinces and territories are closely monitoring indicators of influenza activity this season. Data in the FluWatch report represent surveillance data available at the time of writing, and may change as updates are received.

In week 34, 0.5% of visits to healthcare professionals were due to influenza-like illness (ILI), which remains lower than average compared to recent seasons (Figure 4).

In the 2020-2021 season, 139 influenza-like-illness (ILI) outbreaks in schools and/or daycares, and no other influenza or ILI outbreaks have been reported in any other settings.

Number of provinces and territories reporting in weeks 30 to 34Footnote 1: 11 out of 13

In weeks 30 to 34, no influenza-associated hospitalizations were reported by participating provinces and territoriesFootnote 2, nor have any been reported in the 2020-2021 season.

Number of provinces and territories reporting in weeks 30 to 34: 7 out of 9

In weeks 30 to 34 no influenza-associated hospitalizations were reported. In the 2020-2021 season, less than five pediatric (≤16 years of age) hospitalizations with influenza have been reported by the Immunization Monitoring Program Active (IMPACT) network.

In weeks 30 to 34, no influenza-associated hospitalizations were reported. In the 2020-2021 season, less than five adult (≥16 years of age) hospitalizations with influenza have been reported by the Canadian Immunization Research Network (CIRN) Serious Outcomes Surveillance (SOS) network.

Due to the very low influenza circulation to date this season, the National Microbiology Laboratory has not reported strain characterization information on influenza viruses collected during the 2020-2021 season.

Due to the very low influenza circulation to date this season, the National Microbiology Laboratory has not reported antiviral resistance testing results for influenza viruses collected during the 2020-2021 season.