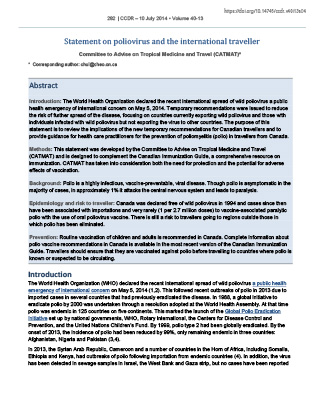 Statement on poliovirus and the international traveller

Committee to Advise on Tropical Medicine and Travel (CATMAT)*

Introduction: The World Health Organization declared the recent international spread of wild poliovirus a public health emergency of international concern on May 5, 2014. Temporary recommendations were issued to reduce the risk of further spread of the disease, focusing on countries currently exporting wild poliovirus and those with individuals infected with wild poliovirus but not exporting the virus to other countries. The purpose of this statement is to review the implications of the new temporary recommendations for Canadian travellers and to provide guidance for health care practitioners for the prevention of poliomyelitis (polio) in travellers from Canada.

Methods: This statement was developed by the Committee to Advise on Tropical Medicine and Travel (CATMAT) and is designed to complement the Canadian Immunization Guide, a comprehensive resource on immunization. CATMAT has taken into consideration both the need for protection and the potential for adverse effects of vaccination.

Background: Polio is a highly infectious, vaccine-preventable, viral disease. Though polio is asymptomatic in the majority of cases, in approximately 1% it attacks the central nervous system and leads to paralysis.

Epidemiology and risk to traveller: Canada was declared free of wild poliovirus in 1994 and cases since then have been associated with importations and very rarely (1 per 2.7 million doses) to vaccine-associated paralytic polio with the use of oral poliovirus vaccine. There is still a risk to travellers going to regions outside those in which polio has been eliminated.

Prevention: Routine vaccination of children and adults is recommended in Canada. Complete information about polio vaccine recommendations in Canada is available in the most recent version of the Canadian Immunization Guide. Travellers should ensure that they are vaccinated against polio before travelling to countries where polio is known or suspected to be circulating.

The World Health Organization (WHO) declared the recent international spread of wild poliovirus a public health emergency of international concern on May 5, 2014Footnote 1,Footnote 2. This followed recent outbreaks of polio in 2013 due to imported cases in several countries that had previously eradicated the disease. In 1988, a global initiative to eradicate polio by 2000 was undertaken through a resolution adopted at the World Health Assembly. At that time polio was endemic in 125 countries on five continents. This marked the launch of the Global Polio Eradication Initiative set up by national governments, WHO, Rotary International, the Centers for Disease Control and Prevention, and the United Nations Children's Fund. By 1999, polio type 2 had been globally eradicated. By the onset of 2013, the incidence of polio had been reduced by 99%, only remaining endemic in three countries: Afghanistan, Nigeria and PakistanFootnote 3,Footnote 4.

In 2013, the Syrian Arab Republic, Cameroon and a number of countries in the Horn of Africa, including Somalia, Ethiopia and Kenya, had outbreaks of polio following importation from endemic countriesFootnote 4. In addition, the virus has been detected in sewage samples in Israel, the West Bank and Gaza strip, but no cases have been reported to dateFootnote 4. Polio cases due to circulating vaccine-derived polio were reported in 2013 in Nigeria, Niger, Chad, Cameroon, Pakistan, Afghanistan, Somalia and Yemen.

In an attempt to limit further spread of polio, a coordinated international response was deemed essential. Temporary polio vaccination recommendations were issued under the 2005 International Health Regulations, to be reviewed after three months, focused on countries currently exporting wild poliovirus and countries with populations infected with wild poliovirus but not exporting the virus to other countriesFootnote 1,Footnote 2. These recommendations included direction on vaccination before international travel for residents and long-term visitors of these countries (for a full description, see referenceFootnote 1). A list of countries with confirmed cases of wild polio can be viewed on the Global Polio Eradication Initiative website together with weekly updates on the epidemiological situation and a breakdown of the number of cases of wild poliovirus by country. The Public Health Agency of Canada also maintains an up-to-date travel health notice with a global update on polioFootnote 5. The purpose of this statement is to review the implications of the new temporary recommendations for Canadian travellers and provide guidance for health care practitioners for the prevention of polio in travellers from Canada.

This statement was developed by a working group of the Committee to Advise on Tropical Medicine and Travel (CATMAT). Each member is a volunteer, and none declared a relevant conflict of interest. The statement was developed to complement the thorough literature review and analysis conducted to develop the National Advisory Committee on Immunization's recommendations, available in the Canadian Immunization Guide, a comprehensive resource on immunization. CATMAT has taken into consideration the need for protection, vaccination requirements and the potential for adverse effects of vaccination.

Polio is a highly infectious, vaccine-preventable, viral disease caused by one of three serotypes of human poliovirus: type 1, 2 and 3. Currently, polio is caused mainly by type 1, as type 2 was eliminated globally by 1999 and type 3 has nearly been eradicated. Clinical polio is more common among children less than five years of age but can occur in anyone who is not immune, regardless of age. It is spread from person to person, primarily via the fecal-oral route and less frequently through close personal contact with infected respiratory secretions or saliva.

The majority of those infected have no symptoms, but in approximately 1% of cases polio can attack the central nervous system and destroy the nerve cells that activate particular muscles, leading to paralysis. Most cases of polio are caused by naturally circulating virus in the environment (wild-type virus). In very rare cases, infection may be caused by the strains of virus found in the oral polio vaccine (OPV). Vaccine-associated polio, when it occurs (vaccine-associated paralytic polio), mostly follows immunization with OPV (about 1 per 2.7 million doses) but also occurs occasionally among close contacts of those vaccinated. OPV is not available in Canada, although it continues to be widely used internationally. The inactivated polio vaccine (IPV), which is used in Canada, cannot cause infection and does not cause vaccine-associated paralytic polio.

IPV consists of inactivated strains from all three poliovirus types. IPV triggers an excellent protective immune response in most individuals. However, it induces only very low levels of mucosal immunity; therefore, the ingested poliovirus can still multiply and be shed in the feces of those immunized with IPV.

A full description of the poliomyelitis vaccines authorized for use in Canada is available in the Canadian Immunization GuideFootnote 6.

Epidemiology of polio in Canada

The WHO declared Canada to be free of wild poliovirus in 1994Footnote 7,Footnote 8. The last indigenous case of wild poliovirus in Canada was in 1977Footnote 6. Since then cases in this country have been associated with importations of wild polio and the use of OPV. Between 1980 and 1995, 11 cases of vaccine-associated paralytic polio associated with OPV vaccine were reported in CanadaFootnote 6. Since 1995/6, all vaccine programs switched from OPV to IPV. A full description of the epidemiology of polio in Canada is available in the Canadian Immunization GuideFootnote 6.

Independent of travel plans, routine vaccination of children and adults is recommended in Canada. A primary series of immunization for children is recommended at 2, 4, 6 and 12-23 months (generally given at 18 months of age) with a booster dose at age 4-6 years. Complete information about polio vaccine recommendations in Canada is available in the most recent version of the Canadian Immunization GuideFootnote 6, and the provincial/territorial immunization schedules are available on the Public Health Agency of Canada website.

IPV is the only vaccine currently available in Canada.

Travellers with unimmunized infants/children should be advised to seriously consider delaying travel to areas where polio is endemic or outbreaks are occurring, ideally until full immunization has been obtained or until at least two doses of IPV have been received (90% seroprotection; see Immunogenicity and safety of vaccine).

Unimmunized or incompletely immunized travellers should receive IPV-containing vaccine as appropriate for age and vaccination status (refer to the Canadian Immunization Guide).

Children with a complete primary series do not require additional doses of IPV vaccine before travelling.

For adults with a complete primary series, a single lifetime dose of polio-containing vaccine is recommended.

1. Recommendations based on the WHO declaration of polio as a Public Health Emergency of International Concern. These recommendations are intended to prevent the spread of polio and not primarily to protect the individual traveller.

Travellers who intend to stay in one of the designated polio-exporting countries or polio-infected countries for the long term (over four weeks) must comply with recent WHO recommendations to receive a dose of OPV or IPV between four weeks and 12 months before international travel. Therefore, to exit one designated country or enter into another may require a polio booster, even if the adult booster dose has already been received and the traveller is considered to have been adequately immunized.

Countries currently exporting wild poliovirus are Pakistan, Equatorial Guinea, Cameroon and the Syrian Arab Republic, and those infected with wild poliovirus but not currently exporting are Afghanistan, Ethiopia, Iraq, Israel, Somalia and particularly Nigeria. The WHO has developed frequently asked questions for travellers (PDF document) about the temporary recommendationsFootnote 9.

This requirement is not mandatory for Canadian citizens (i.e. foreign nationals) and Canadian travellers, either for entering or exiting India or for transiting through polio-infected countries.

It is recommended that travellers affected by these temporary recommendations carry a written vaccination record in the event that evidence of vaccination is requested for country entry or exit requirementsFootnote 11. The International Health Regulations 2005 International Certificate of Vaccination or Prophylaxis is the official document to show proof of vaccination against polio. It is currently available at yellow fever vaccination centres in Canada. A complete list of these centres is available on the Public Health Agency of Canada's website.

The Public Health Agency of Canada has developed guidelines for completing the International Certificate of Vaccination or Prophylaxis.

Immunogenicity and safety of vaccine

Studies have shown that between 89% and 100% of infants vaccinated with IPV in a two-dose schedule (2 and 4 months) and 93%-100% of infants given a three-dose schedule (2, 3 and 4 months) developed seroprotective antibodies one month after the last dose. This is compared with close to 100% seroprotection with a 2, 4, 6 and 12-18 month scheduleFootnote 12.

Adverse events following IPV are usually limited to mild injection site reactions. Serious adverse events are rare following immunization with IPV-containing vaccines and, in most cases, data are insufficient to determine a causal association. Anaphylaxis may occur but is very rareFootnote 6.

Vaccine strains of polio can be present in the throat for one to two weeks and can remain in feces for several weeks following immunization with OPV. In some rare cases, including cases in immunocompromised people, polio (from natural infection or OPV vaccine) can be excreted for prolonged periods of time (from greater than six months to a number of years). A full description of the safety of the vaccine is available in the Canadian Immunization Guide.

Non-immune people can be "passively immunized" by coming into contact with the OPV vaccine strains, usually in feces. IPV immunization does not lead to vaccine strain shedding.

IPV can be administered to immunocompromised travellers. Immunocompromised individuals who will be staying for over four weeks in a country that requires a booster for exit should not receive OPV. They may benefit from having a letter of exemption if OPV is the only vaccine available in that country.

Travellers should be advised to practise good hygiene interventions, including frequent hand washing, to reduce the risk of transmission of polio during travel.

World Health Organization. WHO statement on the meeting of the International Regulations Emergency Committee concerning the international spread of wild poliovirus. 2014. http://www.who.int/mediacentre/news/statements/2014/polio-20140505/en/. Accessed 05/14, 2014.

CATMAT acknowledges and appreciates the contribution of Kelsie Jagt and Tanya Straight-Caron to the statement.