Campylobacter in broiler chicken in Canada 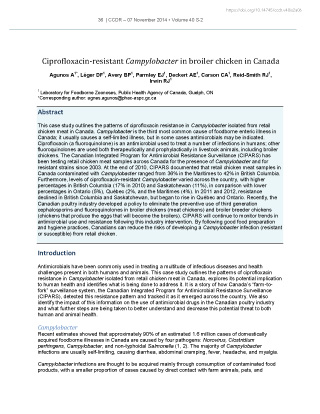 This case study outlines the patterns of ciprofloxacin resistance in Campylobacter isolated from retail chicken meat in Canada. Campylobacter is the third most common cause of foodborne enteric illness in Canada; it usually causes a self-limited illness, but in some cases antimicrobials may be indicated. Ciprofloxacin (a fluoroquinolone) is an antimicrobial used to treat a number of infections in humans; other fluoroquinolones are used both therapeutically and prophylactically in livestock animals, including broiler chickens. The Canadian Integrated Program for Antimicrobial Resistance Surveillance (CIPARS) has been testing retail chicken meat samples across Canada for the presence of Campylobacter and for resistant strains since 2003. At the end of 2010, CIPARS documented that retail chicken meat samples in Canada contaminated with Campylobacter ranged from 36% in the Maritimes to 42% in British Columbia. Furthermore, levels of ciprofloxacin-resistant Campylobacter varied across the country, with higher percentages in British Columbia (17% in 2010) and Saskatchewan (11%), in comparison with lower percentages in Ontario (5%), Québec (2%), and the Maritimes (4%). In 2011 and 2012, resistance declined in British Columbia and Saskatchewan, but began to rise in Québec and Ontario. Recently, the Canadian poultry industry developed a policy to eliminate the preventive use of third generation cephalosporins and fluoroquinolones in broiler chickens (meat chickens) and broiler breeder chickens (chickens that produce the eggs that will become the broilers). CIPARS will continue to monitor trends in antimicrobial use and resistance following this industry intervention. By following good food preparation and hygiene practices, Canadians can reduce the risks of developing a Campylobacter infection (resistant or susceptible) from retail chicken.

Antimicrobials have been commonly used in treating a multitude of infectious diseases and health challenges present in both humans and animals. This case study outlines the patterns of ciprofloxacin resistance in Campylobacter isolated from retail chicken meat in Canada, explores its potential implication to human health and identifies what is being done to address it. It is a story of how Canada's "farm-to-fork" surveillance system, the Canadian Integrated Program for Antimicrobial Resistance Surveillance (CIPARS), detected this resistance pattern and tracked it as it emerged across the country. We also identify the impact of this information on the use of antimicrobial drugs in the Canadian poultry industry and what further steps are being taken to better understand and decrease this potential threat to both human and animal health.

Campylobacter infections are thought to be acquired mainly through consumption of contaminated food products, with a smaller proportion of cases caused by direct contact with farm animals, pets, and contaminated recreational waters. Case control studies have identified a significant association between human campylobacteriosis and consumption of raw or undercooked poultry Footnote 3.

Treatment with antimicrobials is generally not required for uncomplicated cases, but may be necessary for treating vulnerable patients or those with severe, prolonged or systemic infections. In the event treatment is needed, the macrolide drugs erythromycin or azithromycin are recommended, with ciprofloxacin as an alternative drug Footnote 4. However, in a study of antimicrobial use and resistance in two health units in Ontario, 45 of the 138 human cases of campylobacteriosis used ciprofloxacin Footnote 5.

Ciprofloxacin is a fluoroquinolone antimicrobial commonly used in humans for the treatment of respiratory, urinary, skin, and bone/joint infections, as well as some cases of gastroenteritis in adults Footnote 6. Fluoroquinolones are considered "critically" or "very" important to human medicine (Category I) by the World Health Organization Footnote 7 and Health Canada's Veterinary Drugs Directorate Footnote 8.

Fluoroquinolones are used only for rare or sporadic bacterial disease outbreaks in chickens or in treating severe infections where commonly used antimicrobials proved ineffective (i.e., an increasing number of sick and/or dead birds noted in the flock despite antimicrobial use) Footnote 9. In Canada, enrofloxacin is licensed only for use in cattle, pigs, dogs, and cats, and danofloxacin is licensed only for cattle. These fluoroquinolone antimicrobials are not approved for use in poultry. According to Health Canada's Veterinary Drugs Directorate, this class of antimicrobial should not be used for mass medication purposes (i.e., to treat an entire flock or herd of animals) in an extra-label manner (i.e., in a manner that is not in accordance with the label or package insert) Footnote 10.

The Public Health Agency of Canada coordinates CIPARS, a surveillance system that monitors antimicrobial use in humans and animals as well as antimicrobial resistance (AMR) in select bacteria from humans, animals and food Footnote 11. The agri-food component of this Program consists of surveillance through sentinel farms providing herd- or flock-level data on antimicrobial use and AMR; abattoir (slaughter plant) surveillance, providing national representative AMR data for bacteria isolated from animals as they enter the food supply; and retail surveillance, providing data on AMR for bacteria found in raw meat purchased at grocery stores reflecting consumer exposure to antimicrobial resistant bacteria in food. Quantities of antimicrobials distributed for sale for use in animals in Canada are also provided to CIPARS by the Canadian Animal Health Institute. Bacteria of interest are Salmonella, generic Escherichia coli, and Campylobacter.

Several communication strategies were used to notify public and veterinary health stakeholders of these findings. In the summer of 2010, the Ministries of Health and Agriculture in British Columbia and Saskatchewan were notified and poultry veterinarians were consulted. In the summer of 2011, this issue was raised through a CIPARS Surveillance Bulletin Footnote 13 to inform the Canadian poultry industry, other commodity and veterinary organizations, and public health stakeholders. In the summer of 2013, a meeting was organized with poultry industry stakeholders to provide an update on these findings. During the CIPARS national multi-commodity stakeholder meeting in the fall of 2013, this issue was further highlighted and more recent data presented.

Ciprofloxacin-resistant Campylobacter from retail chicken in Canada has become more widespread over the last few years (2011 and 2012) Footnote 14, although the extent and the trends vary according to region. The drivers of the emergence of resistant Campylobacter in retail chicken samples are unknown at this time, but the extra-label use of fluoroquinolones in broilers, broiler breeders, and imported hatching eggs and chicks have been hypothesized as a contributing factor Footnote 12.

Other factors may be at play here however. The literature suggests that on-farm sources and operational factors could contribute to the spread of antimicrobial resistant Campylobacter. A systematic review of the literature suggests that antimicrobial resistant Campylobacter may be disseminated within a flock through the drinking water line and could spread across the farm through farm workers (via contaminated footwear) Footnote 15. Campylobacter has been reported to be spread by chicken catching crews that travel from farm to farm and then onto slaughter plants when birds were exposed to contaminated poultry equipment at transport Footnote 15. The slaughter of chickens from Campylobacter-positive farms was associated with the contamination of chicken meat products Footnote 11 Footnote 13 Footnote 14.

A previous U.S. risk assessment report (2000) has shown that chicken products contaminated with ciprofloxacin-resistant Campylobacter contribute to ciprofloxacin-resistant Campylobacter infections in humans Footnote 21. Consequently, good food safety and hygiene practices are more important than ever to ensure the reduction in transmission of resistant and susceptible Campylobacter from contaminated meat to people. This includes appropriate wrapping and placement of chicken in refrigerators, careful washing of surfaces and utensils that touch raw chicken, using different surfaces for preparing raw meat and vegetables/fruit, and thorough cooking Footnote 22.

Recently, the Canadian poultry industry developed a policy to eliminate the preventive use of antimicrobials considered of very high importance to human medicine; these include third generation cephalosporin and fluoroquinolone antimicrobials Footnote 23. This policy took effect in May 2014 for broilers and will take effect in May 2015 for broiler breeders and turkeys Footnote 23. A one-year extension of the implementation of this policy will allow the industry to inform key stakeholders of this change.

Antimicrobial resistance risk management has no quick fix; patterns of antimicrobial use can take a long time to change and patterns of resistance can also take a long time to disappear. Despite the progress that has been made, CIPARS continues to detect ciprofloxacin-resistant Campylobacter in retail chicken in Canada. It is still unclear how resistance to fluoroquinolones emerged in Campylobacter from broilers in Canada, and if and how it spread from the Western to Central and Eastern regions, or if it emerged independently.

The driver of fluoroquinolone use in this sector also remains unclear. The Veterinary Drugs Directorate established a policy recommending against the extra-label use of Category I antimicrobial drugs in food-producing animals Footnote 10; however, this lies under the purview of practice of veterinary medicine to enforce. Initial data from the farm program suggest that limited extra-label use of fluoroquinolones is occurring in Canadian broiler chicken flocks. CIPARS will continue to monitor farm drug usage and reasons for use (i.e., prophylactic or therapeutic) and to evaluate associations between antimicrobial use and resistance.

CIPARS previously identified gaps in the surveillance of Campylobacter and antimicrobial use practices in Canada. As a result, surveillance of antimicrobial use and resistance at the broiler farm level in Canada was initiated in April 2013; these new data are being used to investigate the relationships between antimicrobial use and resistance as well as the impact of recent policy changes. In addition, CIPARS is currently determining the best approach to carry out AMR testing of human Campylobacter infections to better understand the public health impact of exposure to ciprofloxacin-resistant Campylobacter through retail chicken meat and other sources.

CIPARS will continue to monitor trends in antimicrobial use and resistance following industry's intervention eliminating the preventive use of Category I antimicrobials (of very high importance to human medicine). However, by following good food preparation and hygiene practices, Canadians can reduce the risks of developing a Campylobacter infection from retail chicken.

The authors would like to acknowledge Rita Finley, Dr. Danielle Daignault and the staff at the Laboratory for Foodborne Zoonoses, St. Hyacinthe, Québec; Nicol Janecko and the CIPARS retail field staff; Dr. J.T. McClure/collaborators at University of Prince Edward Island; and Centre for Coastal Health in British Columbia. The authors would like to thank the Canadian Food Inspection Agency and Health Canada's Veterinary Drugs Directorate for reviewing the manuscript.