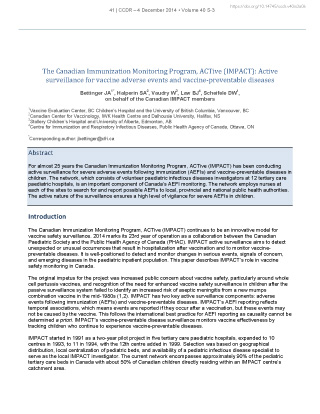 For almost 25 years the Canadian Immunization Monitoring Program, ACTive (IMPACT) has been conducting active surveillance for severe adverse events following immunization (AEFIs) and vaccine-preventable diseases in children. The network, which consists of volunteer paediatric infectious diseases investigators at 12 tertiary care paediatric hospitals, is an important component of Canada's AEFI monitoring. The network employs nurses at each of the sites to search for and report possible AEFIs to local, provincial and national public health authorities. The active nature of the surveillance ensures a high level of vigilance for severe AEFIs in children.

The Canadian Immunization Monitoring Program, ACTive (IMPACT) continues to be an innovative model for vaccine safety surveillance. 2014 marks its 23rd year of operation as a collaboration between the Canadian Paediatric Society and the Public Health Agency of Canada (PHAC). IMPACT active surveillance aims to detect unexpected or unusual occurrences that result in hospitalization after vaccination and to monitor vaccine-preventable diseases. It is well-positioned to detect and monitor changes in serious events, signals of concern, and emerging diseases in the paediatric inpatient population. This paper describes IMPACT's role in vaccine safety monitoring in Canada.

The original impetus for the project was increased public concern about vaccine safety, particularly around whole cell pertussis vaccines, and recognition of the need for enhanced vaccine safety surveillance in children after the passive surveillance system failed to identify an increased risk of aseptic meningitis from a new mumps combination vaccine in the mid-1980s Footnote 1,Footnote 2. IMPACT has two key active surveillance components: adverse events following immunization (AEFIs) and vaccine-preventable diseases. IMPACT's AEFI reporting reflects temporal associations, which means events are reported if they occur after a vaccination, but these events may not be caused by the vaccine. This follows the international best practice for AEFI reporting as causality cannot be determined a priori. IMPACT's vaccine-preventable disease surveillance monitors vaccine effectiveness by tracking children who continue to experience vaccine-preventable diseases.

IMPACT started in 1991 as a two-year pilot project in five tertiary care paediatric hospitals, expanded to 10 centres in 1993, to 11 in 1994, with the 12th centre added in 1999. Selection was based on geographical distribution, local centralization of pediatric beds, and availability of a pediatric infectious disease specialist to serve as the local IMPACT investigator. The current network encompasses approximately 90% of the pediatric tertiary care beds in Canada with about 50% of Canadian children directly residing within an IMPACT centre's catchment area.

Because immunization history is not available at the time of admission for most hospitalized cases and because finding the immunization history for every hospital admission would be impractical, IMPACT uses predetermined targets as the first step to identify post-immunization adverse events (Table 1). These predetermined targets represent serious events for which either biologic plausibility exists that they could be caused by a vaccine or the severity of the event is such that immediate action would be warranted if a new signal were to be detected. The 12 IMPACT nurse monitors actively screen every hospital admission to determine whether or not it meets a predetermined target. All targets are then reviewed to determine whether or not there was a temporal association with previously administered vaccine(s). If an association is found (i.e., if a vaccine was administered within a specific time frame before the event) the event becomes an AEFI.

All AEFIs are reported within 15 days of being identified to PHAC for entry into the national pharmacovigilance database—Canadian Adverse Events Following Immunization Surveillance System (CAEFISS)—as well as to local or provincial public health officials to ensure appropriate follow-up at the individual level. Most target cases have no temporal association with a vaccine. Cases with an association, but with a confirmed non-vaccine cause, are not reported. However, if there is even a small doubt about the cause, the case is reported. In a typical year IMPACT monitors screen around 6,000 admissions to identify about 100 (less than 2%) that are reportable as AEFIs. As a specific example, among cases screened from October 2013 to March 2014, a total of 3,084 target cases were identified and of these only 56 (1.8% of all identified) met the temporal criteria and were reported as an AEFI.

An AEFI detected after BCG (bacille Calmette-Guerin) vaccine is a good example of IMPACT in action. IMPACT's identification of deaths following BCG vaccination Footnote 3 prompted a review of BCG complications that indicated the risk of severe complications in First Nations infants was high and led to changes in the routine use of BCG vaccine in First Nations populations Footnote 4. The first evidence of improved safety with acellular pertussis vaccines was demonstrated with IMPACT data, which found a 79% decrease in febrile seizures associated with the receipt of pertussis vaccine Footnote 5. The data have been used to quantify the risk of hypotonic-hyporesponsive episodes and post-vaccination seizures in children Footnote 6,Footnote 7. IMPACT also published the largest case series in the world on post-vaccination thrombocytopenia, showing that the condition is usually benign and resolves within one month in most children Footnote 8,Footnote 9,Footnote 10.

IMPACT's focus on admitted paediatric cases means the most serious AEFI in children are actively sought and identified. Although less serious AEFI signals might not be identified through IMPACT, it fulfills a key role in Canada's vaccine safety surveillance and is an excellent complement to Canada's other AEFI reporting systems. Over the next three years the network will transition to electronic reporting, which will enable faster transmission and follow-up of information.

While IMPACT captures approximately 90% of pediatric tertiary care beds in Canada, it does not capture all paediatric admissions. With only two centres in Ontario, Canada's most populous province, the network does not adequately represent tertiary care admissions there. Solutions are being sought to address this. In spite of these limitations, IMPACT continues to be well suited to the Canadian context and provides a high level of vigilance for serious AEFIs among children.

The Canadian Immunization Monitoring Program, Active (IMPACT) is a national surveillance initiative managed by the Canadian Paediatric Society. Funding for AEFI surveillance activities is provided by the Public Health Agency of Canada. JAB is supported by a Career Investigator Award from the Michael Smith Foundation for Health Research.