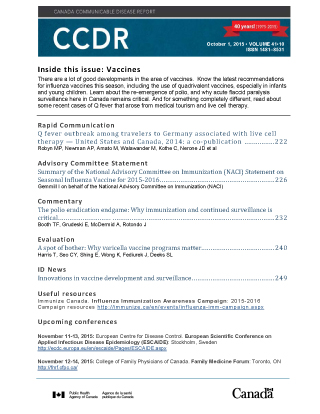 Inside this issue: Vaccines

There are a lot of good developments in the area of vaccines. Know the latest recommendations for influenza vaccines this season, including the use of quadrivalent vaccines, especially in infants and young children. Learn about the re-emergence of polio, and why acute flaccid paralysis surveillance here in Canada remains critical. And for something completely different, read about some recent cases of Q fever that arose from medical tourism and live cell therapy.