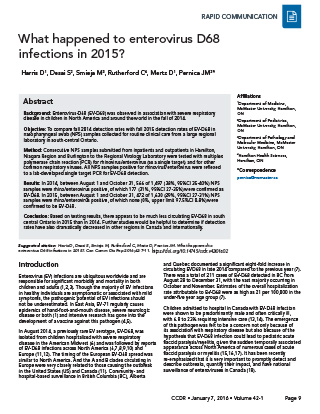 What happened to enterovirus D68 infections in 2015?

Background: Enterovirus-D68 (EV-D68) was observed in association with severe respiratory disease in children in North America and around the world in the fall of 2014.

Method: Consecutive NPS samples submitted from inpatients and outpatients in Hamilton, Niagara Region and Burlington to the Regional Virology Laboratory were tested with multiplex polymerase chain reaction (PCR) for rhinovirus/enterovirus (as a single target) and for other common respiratory viruses. All NPS samples positive for rhinovirus/enterovirus were reflexed to a lab-developed single target PCR for EV-D68 detection.

Conclusion: Based on testing results, there appears to be much less circulating EV-D68 in south central Ontario in 2015 than in 2014. Further studies would be helpful to determine if detection rates have also dramatically decreased in other regions in Canada and internationally.

Enterovirus (EV) infections are ubiquitous worldwide and are responsible for significant morbidity and mortality in both children and adults Footnote 1Footnote 2Footnote 3. Though the majority of EV infections in healthy individuals are asymptomatic or associated with mild symptoms, the pathogenic potential of EV infections should not be underestimated. In East Asia, EV-71 regularly causes epidemics of hand-foot-and-mouth disease, severe neurologic disease or both Footnote 1 and intensive research has gone into the development of a vaccine against this pathogen Footnote 4Footnote 5.

In August 2014, a previously rare EV serotype, EV-D68, was isolated from children hospitalized with severe respiratory disease in the American Midwest Footnote 6 and was followed by reports of EV-D68 infections across North America Footnote 6Footnote 7Footnote 8Footnote 9Footnote 10 and Europe Footnote 11Footnote 12. The timing of the European EV-D68 spread was similar to North America. And the A and B clades circulating in Europe were very closely related to those causing the outbreak in the United States (US) and Canada Footnote 11. Community- and hospital-based surveillance in British Columbia (BC), Alberta and Quebec documented a significant eight-fold increase in circulating EV-D68 in late 2014 compared to the previous year Footnote 7. There was a total of 211 cases of EV-D68 detected in BC from August 28 to December 31, with the vast majority occurring in October and November. Estimates of the overall hospitalization rate attributable to EV-D68 were as high as 21 per 100,000 in the under-five year age group Footnote 7.

Children admitted to hospital in Canada with EV-D68 infection were shown to be predominantly male and often critically ill, with 6.8 to 23% requiring intensive care Footnote 13Footnote 14. The emergence of this pathogen was felt to be a concern not only because of its association with respiratory disease but also because of the hypothesis that EV-D68 infection could lead to pediatric acute flaccid paralysis/myelitis, given the sudden temporally-associated appearance across North America of numerous cases of acute flaccid paralysis or myelitisFootnote 15Footnote 16Footnote 17. It has been recently re-emphasized that it is very important to promptly detect and describe outbreaks, quantify their impact, and have national surveillance of enteroviruses in Canada Footnote 18.

The objective of this study was to document the results of the RVL's nasopharyngeal specimen (NPS) testing in the fall of 2015 and compare it with results from the fall of 2014.

The RVL's respiratory panel contains a PCR target highly conserved among rhinoviruses and enteroviruses. This test is very sensitive for the detection of rhinovirus/enterovirus but definite pathogen identification requires a second test specific to enteroviruses. It was discovered in 2014 that the enterovirus-specific assay previously used at the RVL lacked the sensitivity of the rhinovirus/enterovirus assay and did not identify EV-D68 reliably. A highly sensitive, laboratory-developed real-time PCR assay for a unique sequence within the VP1 gene of EV-D68 was developed.

Flocked NPS samples collected as part of routine care and transported in viral transport medium were extracted using the easyMag® platform (bioMérieux®, Marcy L'Etoile, France), and tested by two multiplex PCRs (one targeting influenza A and B, respiratory syncytial virus and rhinovirus/enterovirus and the other targeting parainfluenza types 1-3, metapneumovirus and adenovirus). All NPS testing results for the Region are entered weekly into a database containing date, age and clinical centre. Specific testing for EV-D68 was done with all NPS which tested positive for rhinovirus/enterovirus, received between August 1 and October 31 in both 2014 and 2015. Comparison between the proportion of all NPS samples positive for rhino/enterovirus in 2014 and 2015 was done using STATA version 11.2 (College Station, Texas).

There has been no evidence of any significant or sustained EV-D68 transmission in the region in 2015, and the peak of rhinovirus/enterovirus season has passed. The timing of the EV-D68 peak in 2014 was consistent with typical rhinovirus/enterovirus circulation in the region; Canadian surveillance data have shown that hospitalizations for asthma exacerbations, primarily triggered by viral infections, peak 16.7 days (95%CI 15.8-17.5 days) after the first day of public school Footnote 19. There may have been much less circulating EV-D68 in 2015 simply because there were many fewer susceptible individuals than there were in 2014; alternatively, EV-D68 might have been associated with less severe disease in 2015, which would also lead to diminished recognition because of fewer presentations to medical professionals. Since the population served by the Regional Virology Laboratory is large, reflected in part by the fact that in 2014 there were almost as many EV-D68 positives in its catchment as in the entire province of BC, it may be that other Canadian regions will also experience diminished EV-D68 activity in 2015.

There have been no cases of acute flaccid paralysis or myelitis diagnosed in our region during the current enterovirus season and the lack of circulating EV-D68 leads the authors to be cautiously optimistic that an increased incidence of neurologic disease will not be observed this year. However, the possibility of a late spike in circulating rhino/enteroviruses cannot be ruled out and therefore regional surveillance will continue. EV-D68, for now, continues to be a public health issue of relevance, given its known ability to cause respiratory disease and possible association with severe neurologic sequelae in children.

Dr. Pernica is the recipient of a research Early Career Award from Hamilton Health Sciences.

Booth TF, Grudeski E, McDermid A. National surveillance for non-polio enteroviruses in Canada: why is it important? Can Commun Dis Rep. 2015;41:11-17.