Impacts of the increase of urban sprawl in Montréal 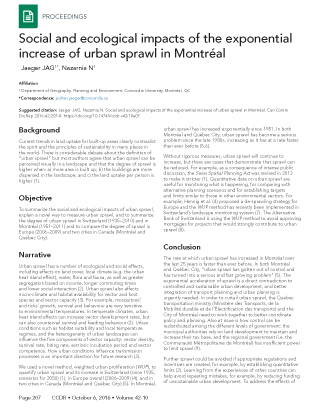 Current trends in land uptake for built-up areas clearly contradict the spirit and the principles of sustainability in many places in the world. There is considerable debate about the definition of "urban sprawl" but most authors agree that urban sprawl can be perceived visually in a landscape and that the degree of sprawl is higher when: a) more area is built up; b) the buildings are more dispersed in the landscape; and c) the land uptake per person is higherFootnote 1.

We used a novel method, weighted urban proliferation (WUP), to quantify urban sprawl and its increase in Switzerland (since 1935, scenarios for 2050)Footnote 1, in Europe overall (2006–2009)Footnote 4, and in two cities in Canada (Montréal and Québec City)Footnote 5. In Montréal, urban sprawl has increased exponentially since 1951. In both Montréal and Québec City, urban sprawl has become a serious problem since the late 1980s, increasing as it has at a rate faster than ever beforeFootnote 5Footnote 6.

Without rigorous measures, urban sprawl will continue to increase, but there are cases that demonstrate that sprawl can be reduced. For example, as a consequence of intense public discussion, the Swiss Spatial Planning Act was revised in 2013 to make it stricterFootnote 1. Quantitative data on urban sprawl are useful for monitoring what is happening, for comparing with alternative planning scenarios, and for establishing targets and limits similar to those in other environmental sectors. For example, Hennig et al.Footnote 4 proposed a de-sprawling strategy for Europe and the WUP method has recently been implemented in Switzerland's landscape monitoring systemFootnote 7. The Alternative Bank of Switzerland is using the WUP method to avoid approving mortgages for projects that would strongly contribute to urban sprawlFootnote 8.

The rate at which urban sprawl has increased in Montréal over the last 25 years is faster than ever before. In both Montréal and Québec City, "urban sprawl has gotten out of control and has turned into a serious and fast growing problem"Footnote 5. The exponential acceleration of sprawl is a direct contradiction to controlled and sustainable urban development, and better integration of transport planning and urban planning is urgently needed. In order to curtail urban sprawl, the Quebec transportation ministry (Ministère des Transports, de la Mobilité durable et de l'Électrification des transports) and the City of Montréal need to work together to better coordinate policy and planning. Also at issue is how control can be redistributed among the different levels of government: the municipal authorities rely on land development to maintain and increase their tax base, and the regional government (i.e. the Communauté Métropolitaine de Montréal) has insufficient power to limit sprawlFootnote 9.

Further sprawl could be avoided if appropriate regulations and incentives are created, for example, by establishing quantitative limitsFootnote 2. Learning from the experiences of other countries can help avoid repeating mistakes, for example, by reducing funding of unsustainable urban development. To address the effects of climate change on cities, Montréal city planners and residents are now working towards enhancing the connectedness of natural areas in the cityFootnote 6Footnote 10. This could help reduce the urban heat island effect and help keep the density of vector and host species within a reasonable range through the dynamic balancing that takes place in ecological communities (i.e. predator-prey relationships of food webs within a network of natural areas rather than isolated patches).

Dupras J, Drouin C, André P, Gonzalez A. Towards the establishment of a green infrastructure in the region of Montréal (Quebec, Canada). Plan Pract Res 2015;30(4):355-75.