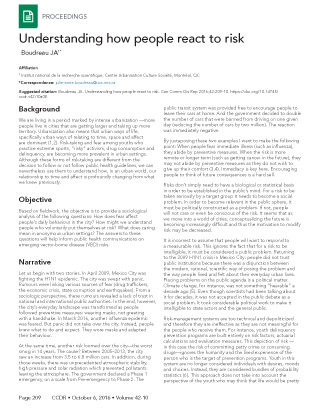 Understanding how people react to risk

We are living in a period marked by intense urbanization—more people live in cities that are getting larger and taking up more territory. Urbanization also means that urban ways of life, specifically urban ways of relating to time, space and affect are dominantFootnote 1Footnote 2. Risk-taking and fear among youths who practice extreme sports, "risky" activism, drug consumption and delinquency are becoming more prevalent in urban settings. Although these forms of risk-taking are different from the decision to follow or not follow public health guidelines, we can nevertheless use them to understand how, in an urban world, our relationship to time and affect is profoundly changing from what we knew previously.

Based on fieldwork, the objective is to provide a sociological analysis of the following questions: How does fear affect people's daily behaviour in the city? How might we understand people who voluntarily put themselves at risk? What does caring mean in anonymous urban settings? The answers to these questions will help inform public health communications on emerging vector-borne disease (VBD) risks.

Let us begin with two stories. In April 2009, Mexico City was fighting the H1N1 epidemic. The city was swept with panic. Rumours were linking various sources of fear (drug traffickers, the economic crisis, state corruption and earthquakes). From a sociologic perspective, these rumours revealed a lack of trust in national and international public authorities. In the end, however, the city's everyday landscape was transformed as people followed preventive measures: wearing masks, not greeting with a handshake. In March 2016, another influenza epidemic was feared. But panic did not take over the city. Instead, people knew what to do and expect. They wore masks and adapted their behaviour.

At the same time, another risk loomed over the city—the worst smog in 14 years. The cause? Between 2005–2013, the city saw an increase from 3.5 to 6.8 million cars. In addition, during those weeks, there was unprecedented atmospheric stability, high pressure and solar radiation which prevented pollutants leaving the atmosphere. The government declared a Phase 1 emergency, on a scale from Pre-emergency to Phase 2. The public transit system was provided free to encourage people to leave their cars at home. And the government decided to double the number of cars that were banned from driving on one given day (reducing the number of cars by two million). The reaction was immediately negative.

By juxtaposing these two examples I want to make the following point: When people fear immediate illness (such as influenza), they abide by preventive measures. When the risk is more remote or longer term (such as getting cancer in the future), they may not abide by preventive measures as they do not wish to give up their comfortFootnote 3Footnote 4. Immediacy is key here. Encouraging people to think of future consequences is a hard sell.

Risks don't simply need to have a biological or statistical basis in order to be established in the public's mind. For a risk to be taken seriously by a target group it needs to become a social problem. In order to become relevant in the public sphere, it must be politically constructed as a problem. If not, people will not care or even be conscious of the risk. It seems that as we move into a world of cities, conceptualizing the future is becoming increasingly difficult and thus the motivation to modify risk may be decreased.

It is incorrect to assume that people will want to respond to a measurable risk. This ignores the fact that for a risk to be intelligible, it must be considered a public problem. Returning to the 2009 H1N1 crisis in Mexico City: people did not trust public institutions because there was a disjunction between the modern, rational, scientific way of posing the problem and the way people lived and felt about their everyday urban lives. Placing problems on the public agenda is a political matter. Climate change, for instance, was not something "hearable" a decade agoFootnote 5. Even though scientists had been talking about it for decades, it was not accepted in the public debate as a social problem. It took considerable political work to make it intelligible to state actors and the general public.

Risk-management systems are too technical and depoliticized and therefore they are ineffective as they are not meaningful for the people who receive them. For instance, youth delinquency prevention programs are built entirely on risk factors, actuarial calculations and evaluation measures. This depiction of risk—in this case the risk of committing petty crime or consuming drugs—ignores the humanity and the lived experience of the person who is the target of prevention programs. Youth in this system are no longer considered individuals with desires, moods and choices. Instead, they are considered bundles of probability statisticsFootnote 6. This approach does not take into account the perspective of the youth who may think that life would be pretty dull without risk and that risk-taking has its pleasuresFootnote 7. It essentially dehumanizes the person who is the target of the prevention programs.

Calculating risks and designing preventive measures accordingly may not be an effective way to address the emerging risk of VBDs in cities. As a youth prevention worker in Montréal-Nord (November 18, 2008) said, "C'est important d'humaniser le gang. Dans le gang, il y a des individus qui ont des vies brisées." ("It's important to humanize the gang. In gangs, there are individuals with broken lives."). An effective approach needs to acknowledge people's lived experience and be politically constructed as a problem for it to become a socially accepted risk. We need to humanize our approach and speak a language people can hear: care.

Why do people continue to take risks even if it seems "irrational" to do so? There are two interrelated elements of response: Because they do not trust state authoritiesFootnote 8 and because they do not feel recognized as individuals with their unique desires, needs and feelings.

It is an unfortunate characteristic of risk-management systems to think systematically and not in terms of human interactionsFootnote 7Footnote 9. If there is no trust, if people do not feel that they are recognized as individuals, then the critical process of politicizing a problem will not occur. When this happens, the problem does not appear on the social radar and all risk communication is perceived as irrelevant.

Caring fundamentally speaks of human interactions. People do not isolate one risk (for instance, vector-borne diseases), they make decisions based on their lives as a whole. And this can be understood only if we humanize our approach to risk-prevention.