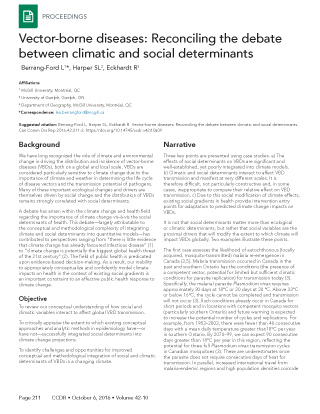 Vector-borne diseases: Reconciling the debate between climatic and social determinants

We have long recognized the role of climate and environmental change in driving the distribution and incidence of vector-borne diseases (VBDs), both on a global and local scale. VBDs are considered particularly sensitive to climate change due to the importance of climate and weather in determining the life cycle of disease vectors and the transmission potential of pathogens. Many of these important ecological changes and drivers are themselves driven by social change and the distribution of VBDs remains strongly correlated with social determinants.

A debate has arisen within the climate change and health field regarding the importance of climate change vis-à-vis the social determinants of health. This debate—largely attributable to the conceptual and methodological complexity of integrating climate and social determinants into quantitative models—has contributed to perspectives ranging from "there is little evidence that climate change has already favoured infectious disease" Footnote 1 to "climate change is potentially the biggest global health threat of the 21st century"Footnote 2. The field of public health is predicated upon evidence-based decision-making. As a result, our inability to appropriately conceptualize and confidently model climate impacts on health in the context of existing social gradients is an important constraint to an effective public health response to climate change.

To review our conceptual understanding of how social and climatic variables interact to affect global VBD transmission.

To critically appraise the extent to which existing conceptual approaches and analytic methods in epidemiology have—or have not—successfully integrated social determinants into climate change projections.

To identify challenges and opportunities for improved conceptual and methodological integration of social and climatic determinants of VBDs in a changing climate.

Three key points are presented using case studies. a) The effects of social determinants on VBDs are significant and well-established, yet poorly integrated into climate models. b) Climatic and social determinants interact to affect VBD transmission and manifest at very different scales. It is therefore difficult, not particularly constructive and, in some cases, inappropriate to compare their relative effect on VBD transmission. c) Due to this social modification of climate effects, existing social gradients in health provide intervention entry points for adaptation to predicted climate change impacts on VBDs.

It is not that social determinants matter more than ecological or climatic determinants, but rather that social variables are the proximal drivers that will modify the extent to which climate will impact VBDs globally. Two examples illustrate these points.

The first case assesses the likelihood of autochthonous (locally acquired, mosquito-transmitted) malaria re-emergence in CanadaFootnote 3Footnote 5. Malaria transmission occurred in Canada in the past and southern Ontario has the conditions (the presence of a competent vector, potential for limited but sufficient climatic conditions for parasite replication) for transmission todayFootnote 3. Specifically, the malarial parasite Plasmodium vivax requires approximately 30 days at 18°C or 20 days at 20°C. Above 33°C or below 16°C, the cycle cannot be completed and transmission will not occurFootnote 3. Such conditions already occur in Canada for short periods and in locations with competent mosquito vectors (particularly southern Ontario) and future warming is expected to increase the potential number of cycles and replications. For example, from 1983–2003, there were fewer than 40 consecutive days with a mean daily temperature greater than 18°C per year in southern Ontario. By 2070–99, we can expect 90 consecutive days greater than 18°C per year in this region, reflecting the potential for three full P. vivax transmission cycles in Canadian mosquitoes3. These are underestimates since the parasite does not require consecutive days of heat for transmission. In parallel, increased international travel from malaria-endemic regions and high population densities coincide spatially in southern Ontario, increasing the probability of theoretical transmission intensityFootnote 3.

However, a finer-scale spatio-temporal analysis of risk in southern Ontario indicates that very few imported malaria cases (parasite presence) coincide with areas where vectors are presentFootnote 4Footnote 5. Imported malaria cases are predominantly located in the Greater Toronto Area (GTA) in lower income, high-density neighbourhoods with a higher proportion of immigrants from malaria-endemic areasFootnote 4. In contrast, vectors are largely present in the Toronto suburbs and outlying cities on the edges of the GTAFootnote 5. This case-study illustrates how vector-borne disease risk is scale-dependent and that the scales at which social and climatic determinants vary—and typically at which data are available—are often vastly different. While social determinants typically vary spatially from neighbourhood to neighbourhood, climate and weather do not vary across neighbourhoods, but rather across broader regional scales. Similarly, while weather can vary temporally on an hourly basis, social determinants of VBDs typically only vary significantly over years or decades.

The case of malaria in Canada illustrates the interacting role of social and climatic determinants of vector-borne disease risk and the challenge of disentangling them. This point is developed further by presenting forthcoming results from Uganda and Peru, demonstrating significant effect modification by social gradients of the impact of weather on the incidence of vector-borne disease. In these additional examples, it can be empirically shown that social variables are not simply confounders (controls) of the effects of climate on health, but rather effect modify the extent to which climate will affect VBDs. Despite this, social variables are rarely integrated into climate-health models as effect modifiers. In this context, we cannot attribute changes in VBDs independently to climate variation.

In the face of negligible international success in reducing climate change emissions, we must adapt to the emerging health impacts of climate change. Intervention on climatic determinants of health is thus an inadequate yet important lever for public health action. We can develop interventions to modify social determinants. As effect modifiers of the climate- vector-borne disease relationship, social interventions have the potential to reduce climate impacts on health beyond direct health benefits by reducing climate vulnerability. Social determinants of vector-borne disease transmission provide the most feasible and perhaps only realistic, opportunity for VBD control and prevention in a changing climate.