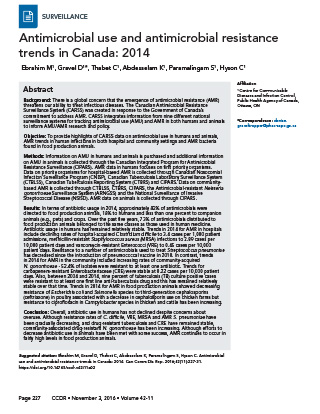 Background: There is a global concern that the emergence of antimicrobial resistance (AMR) threatens our ability to treat infectious diseases. The Canadian Antimicrobial Resistance Surveillance System (CARSS) was created in response to the Government of Canada’s commitment to addressing AMR. CARSS integrates information from nine different national surveillance systems for tracking antimicrobial use (AMU) and AMR in both humans and animals to inform AMU/AMR research and policy.

Objective: To provide highlights of CARSS data on antimicrobial use in humans and animals, AMR trends in human infections in both hospital and community settings and AMR bacteria found in food production animals.

Results: In terms of antibiotic usage in 2014, approximately 82% of antimicrobials were directed to food production animals, 18% to humans and less than one percent each to companion animals (e.g., pets) and crops. Over the past five years, 73% of antimicrobials distributed to food production animals belonged to the same classes as those used in human medicine. Antibiotic usage in humans has remained relatively stable. Trends in 2014 for AMR in hospitals include declining rates of hospital‑acquired Clostridium difficile to 3.4 cases per 1,000 patient admissions, methicillin‑resistant Staphylococcus aureus (MRSA) infections to 2.89 cases per 10,000 patient days and vancomycin‑resistant Enterococci (VRE) to 0.45 cases per 10,000 patient days. Resistance to a number of antimicrobials used to treat Streptococcus pneumoniae has decreased since the introduction of pneumococcal vaccine in 2010. In contrast, trends in 2014 for AMR in the community included increasing rates of community‑acquired N. gonorrhoeae ‑ 52.4% of isolates were resistant to at least one antibiotic. Trends for carbapenem‑resistant Enterobacteriaceae (CRE) were stable at 0.22 cases per 10,000 patient days. Also, between 2004 and 2014, nine percent of tuberculosis (TB) culture positive cases were resistant to at least one first line anti‑tuberculosis drug and this has remained relatively stable over that time. Trends in 2014 for AMR in food production animals showed decreasing resistance of Escherichia coli and Salmonella species to third‑generation cephalosporins (ceftriaxone) in poultry associated with a decrease in cephalosporin use on chicken farms, but resistance to ciprofloxacin in Campylobacter species in chicken and cattle has been increasing.

Conclusion: Overall, antibiotic use in humans has not declined despite concerns about overuse. Although resistance rates of C. difficile, VRE, MRSA and AMR S. pneumoniae have been gradually decreasing and drug‑resistant tuberculosis and CRE have remained stable, community‑associated drug‑resistant N. gonorrhoeae has been increasing. Although efforts to decrease antibiotic use in animals have been met with some success, AMR continues to occur in fairly high levels in food production animals.

The extent of antimicrobial use (AMU) and antimicrobial resistance (AMR) are global concerns due to increased resistance levels detected in some pathogenic microbes and the selective pressure resulting from antimicrobial use in both animals and humansFootnote 1. The damaging effects of AMR are already manifesting themselves across the world with antimicrobial resistant infections currently claiming at least 50,000 lives each year across Europe and the US alone, with many hundreds of thousands more dying in other areas of the worldFootnote 2. In order to monitor AMU/AMR in Canada, the Canadian Antimicrobial Resistance Surveillance System (CARSS) was created. Through collaboration with internal and external stakeholders, CARSS integrates several sources of AMU/AMR surveillance information to provide a unified national picture of AMU and AMR in humans and animals in Canada. Data on both humans and animals is included because inappropriate antimicrobial use in food production animals is a public health concern as it contributes to the emergence of resistant bacteria in animals that can be transmitted to humans through the food supplyFootnote 3. The first CARSS Report, issued in March 2015, provided information on AMU/AMR in Canada until 2013Footnote 4.

The objective of this summary is to highlight the key findings of the CARSS second report summarizing surveillance data up to 2014. The full Report is available onlineFootnote 5.

Information is collected in four key areas: AMU in humans, AMU in animals, AMR in humans in health care and community settings and AMR in food production animals.

Antimicrobial usage in humans and animals

CARSS purchases human AMU data from IMS Health Canada Inc., a global company that collects information on hospital antibiotic purchases and prescriptions dispensed by retail pharmacies in the community as well as antimicrobials prescribed by physicians. CARSS obtains animal AMU data from the Canadian Animal Health Institute (CAHI) which collects data on over 90% of all sales of licensed animal pharmaceutical products in Canada. The Public Health Agency of Canada (PHAC) collects additional AMU information from sentinel farms through the Canadian Integrated Program for Antimicrobial Resistance Surveillance (CIPARS). CIPARS monitors trends in AMU and AMR in selected bacterial organisms from human, animal and food sources across CanadaFootnote 6.

A summary of all the data collected by CARSS on AMR on priority organisms for both humans and animals is summarized in Table 1.

Due to the nature of the method used to collect the data from the established surveillance systems, statistical analysis is descriptive. Numerous years of data facilitated the establishment of benchmarks and the analysis of trends over time.

Over the past five years (2010 to 2014) 73% of antimicrobials distributed to food production animals belonged to the same classes as those used in human medicine, with 1.5 million kg of antimicrobial active ingredients distributed for use in animals in 2014. This is a 5.0% increase from 2013.

AMU in humans has remained relatively stable in Canada over the last 13 years. In 2014, compared to 2013, there was little change in the total number of antimicrobials dispensed by community pharmacies whereas hospital purchases decreased by 4.0%. Antimicrobials dispensed by community pharmacies accounted for 93% of all antimicrobial use. Between 2010 and 2014, prescribing rates for antimicrobials declined among children (0-14 years) by 8.0%, and among adults (15-59 years) by 3.0%, but decreases were not observed among seniors (60+ years).

The majority of antimicrobials used in the Canadian outpatient population in 2014 were drugs for oral administration. Compared to 2013, parenteral (intravenous) antimicrobials dispensed at higher levels in 2014 included daptomycin, ticarcillin and clavulanic acid, fosfomycin, imipenem and cilastatin, ceftazidime, ceftriaxone and colistin. A steady increase has been noted over the last five years in dispensing of parenteral antimicrobials.

In 2014, antimicrobials were the recommended treatment in eight percent of all diagnoses. The majority of recommendations were for the treatment of respiratory infections including upper respiratory tract infections, bronchitis and acute sinusitis (Figure 2). This a concerning trend because antibiotics are not recommended as a first line of treatment in acute bronchitis or acute sinusitisFootnote 10Footnote 11. Generally, the percentage of diagnoses for which an antimicrobial was recommended remained stable.

Usage in food production in animals

Fluoroquinolones are classified as of "very high importance to human medicine" by Health Canada's Veterinary Drugs Directorate. Since 2010 there has been a 40% increase in the quantity of fluoroquinolones distributed for use in animals, likely due in part to the approval of a new indication for fluoroquinolone use. Between 2013 and 2014, the quantity increased by 14%. Third-generation cephalosporins are also highly important to human medicine because they are a last line of defence. CAHI data show a 60% decline in the quantity of cephalosporins distributed for use in animals from 2011 to 2014.

As shown in Figure 3, after adjusting for animal population numbers and weight (green line), the overall quantity of antimicrobials distributed has remained relatively stable over time with a 3.0% increase since 2006 and a 1.0% increase since 2013. Over the past five years (2010-2014), this amount has increased by 16%.

In health care settings AMR trends are tracked for first priority organisms (those identified as of highest concern) (Table 2).

Trends in AMR for first priority organisms in community settings are outlined in the 2016 CARSS Report (Table 3).

The CARSS 2016 Report identified that in 2014, more than 80% of antimicrobials distributed in Canada were directed to food production animals. Antimicrobial use in humans and animals has remained relatively stable over the past few years. Healthcare-associated C. difficile infection, VRE and MRSA, have decreased, whereas, CRE remained relatively stable. In the community, resistant S. pneumoniae has gradually decreased; drug‑resistant N. gonorrhoea has increased, while drug-resistant TB has remained stable. In food production animals, resistance to third‑generation cephalosporins in generic E. col and Salmonella species has decreased in chicken while resistance to ciprofloxacin in Campylobacter species has increased in chicken and cattle.

With the implementation of CARSS, PHAC has improved the coordination of surveillance for AMU/AMR to assist stakeholders with the integrated data they need to inform further progress in reducing the threat of AMR and preserving the efficacy of today's antimicrobials.

Despite these advances in our surveillance capacity, gaps still exist. There is a need for more data on a number of priority pathogens (e.g., E. coli, Neisseria gonorrhoea and Shigella) and there is limited data on AMR in smaller, non‑academic hospitals, including those in rural and northern health care settings and First Nations communities. Overall, there is limited data on AMR in the community, outpatient clinics, long-term care facilities and physicians' and dentists' offices. Data on AMU in animals is also limited. For example, data concerning the amounts of over‑the‑counter antimicrobials sold without veterinary prescription or the amounts imported as active pharmaceutical ingredients for compounding by veterinarians and/or used in food production animals is limited. Even with all the data we do have, we still do not completely understand the link between AMU and the emerging patterns of AMR in Canada.

PHAC is committed to addressing these surveillance gaps by working with provincial and territorial partners and other stakeholders to expand surveillance activities to collect quality data regarding health professional prescribing practices, infection rates and resistance patterns for key priority organisms, particularly in community settings. PHAC is also working with the World Health Organization to develop common indicators for AMR resistant pathogens.