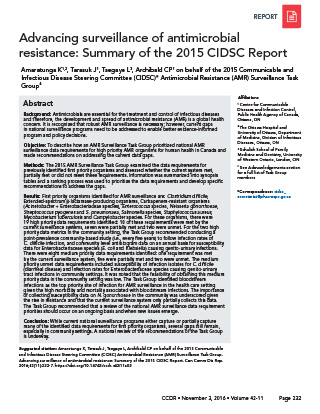 Advancing surveillance of antimicrobial resistance: Summary of the 2015 CIDSC Report

Background: Antimicrobials are essential for the treatment and control of infectious diseases and therefore, the development and spread of antimicrobial resistance (AMR) is a global health concern. It is recognized that robust AMR surveillance is necessary; however, current gaps in national surveillance programs need to be addressed to enable better evidence-informed program and policy decisions.

Methods: The 2015 AMR Surveillance Task Group examined the data requirements for previously identified first priority organisms and assessed whether the current system met, partially met or did not meet these requirements. Information was summarized into synopsis tables and a ranking process was used to prioritize the data requirements and develop specific recommendations to address the gaps.

Results: First priority organisms identified for AMR surveillance are: Clostridium difficile, Extended-spectrum β-lactamase-producing organisms, Carbapenem-resistant organisms (Acinetobacter + Enterobacteriaceae species), Enterococcus species, Neisseria gonorrhoeae, Streptococcus pyogenes and S. pneumonaea, Salmonella species, Staphylococcus aureus, Mycobacterium tuberculosis and Campylobacter species. For these organisms, there were 19 high priority data requirements identified: 10 of these requirements were met by the current surveillance systems, seven were partially met and two were unmet. For the two high priority data metrics in the community setting, the Task Group recommended conducting a point-prevalence community-based study (i.e., every five years) to follow infection rates of C. difficile infection, and community level antibiogram data on an annual basis for susceptibility data for Enterobacteriaceae species (E. coli and Klebsiella) causing genito-urinary infections. There were eight medium priority data requirements identified: one requirement was met by the current surveillance system, five were partially met and two were unmet. The medium priority unmet data requirements included susceptibility of infection isolates for C. difficile (diarrheal disease) and infection rates for Enterobacteriaceae species causing genito‑urinary tract infections in community settings. It was noted that the feasibility of obtaining this medium priority in data in the community setting was low. The Task Group identified bloodstream infections as the top priority site of infection for AMR surveillance in the health care setting given the high morbidity and mortality associated with bloodstream infections. The importance of collecting susceptibility data on N. gonorrhoeae in the communitywas underscored given the rise in resistance and that the current surveillance system only partially collects this data. The Task Group recommended that a review of the national AMR surveillance data requirement priorities should occur on an ongoing basis and when new issues emerge.

Conclusion: While current national surveillance programs either capture or partially capture many of the identified data requirements for first priority organisms, several gaps still remain, especially in community settings. A national review of the recommendations of the Task Group is underway.

Resistant strains of bacteria have emerged since antibiotics were first introduced. The development of antimicrobial resistance (AMR) presents increasingly serious and complex challenges to clinical practice and public health in the prevention, control and treatment of infectious diseases in both humans and animals.

Surveillance is fundamental to understanding the current state and progression of AMR. For several years, the Public Health Agency of Canada (PHAC) has worked with provinces and territories on a number of surveillance programs to monitor AMR and ongoing antimicrobial use (AMU) in hospitals and community-based settings, as well as veterinary and agricultural settingsFootnote 1Footnote 2Footnote 3Footnote 4. A key commitment of the Federal Action Plan on AMU and AMR in Canada is to merge the different surveillance systems into a common focal point  through the Canadian Antimicrobial Resistance Surveillance System (CARSS), launched in 2014Footnote 5. CARSS provides an integrated picture of AMU/AMR in Canada based on surveillance data from PHAC's nine surveillance systems and laboratory reference services and is now published yearlyFootnote 6. In addition to addressing AMR in specific high-risk populations such as Indigenous peoples, analyzing surveillance data with a sex and gender-based focus have been noted for future considerations.

The Communicable and Infectious Disease Steering Committee (CIDSC) of the Pan-Canadian Public Health Network Council (which represents federal, provincial and territorial partners) has identified AMR as a priority along with the need for robust surveillance systems to inform effective AMR prevention and control programs and policies. In 2014, CIDSC established an expert-based Task Group to develop recommendations to address common health care acquired infections and operational issues related to surveillance of AMR. The Task Group identified key elements of a pan-Canadian AMU-AMR approach to the human health aspects of surveillance and established a list of organisms for AMR surveillance ranked by first, second and third priority of importance (Table 1).

The Task Group members included Canadian infectious diseases clinicians, infection prevention and control practitioners, medical microbiologists, public health practitioners and AMR experts. The Task Group first reviewed and summarized the surveillance data requirements for the first priority organisms. A ranking process was then conducted to prioritize the data requirements and specific recommendations to address these gaps in the surveillance data were developed.

The CIDSC AMR Surveillance Task Group reviewed the following surveillance data requirements for each of the first priority organisms:

For each organism reviewed, the CIDSC AMR Surveillance Task Group selected the site of infection(s) deemed to be of national importance and/or which aligned with the World Health Organization (WHO) global AMR surveillance requirementsFootnote 8.

A discussion summary was prepared for each organism including a description of the existing surveillance system(s) and respective system limitations. This summary also included a subjective ranking of the priority of the data requirement(s) and a recommendation according to the expert opinion of the Task Group members. A synopsis table was created from this information for each first priority organism that featured:

For the infecting and colonizing isolates, the type of antibiotic susceptibility chosen was based on available laboratory information, clinical relevance and WHO reportingFootnote 9. The susceptibility data of interest was provided as susceptible/intermediate/resistant (SIR) data rather than minimum inhibitory concentrations (MIC).

Table 2 shows a sample synopsis table for one priority organism, C. difficile, with grey bars showing the health care and community settings with types of data required underneath.

A three-step process was undertaken to examine the most important data requirements and the feasible next steps:

Step 1: The list of data requirements was stratified by priority (high, medium, low). Priority in this instance referred to an assessment of the overall importance of the data requirement for national AMR surveillance, as deemed by a consensus of Task Group members.

Step 3: The list of data requirements from Step 2 was further stratified by a feasibility measure as categorized as: high, medium or low feasibility or not assessed. Feasibility was determined by the amount of person-time effort and financial resources that will be needed to accomplish the proposed action to fill the required data gap.

Recommendations were developed through examination of the three-step process, discussion and consensus‑building.

The Task Group examined the 10 of 19 high priority metrics for which the existing national surveillance systems met the required needs. When assessed for feasibility, eight had high feasibility for collecting the data and no new action was required (as no gaps were identified) and two had medium feasibility to continue to collect the required data, subject to ongoing availability of resources.

Does not meet the needs

The Task Group then examined the two of 19 high priority metrics for which the existing national surveillance did not meet the required needs (Table 4). These two metrics were for infection rates of community-based surveillance of C. difficile and susceptibility of infection isolates for Enterobacteriaceae species. In both cases, the feasibility to address the actions required to fill the data gap was identified as medium.

The Task Group recommended that efforts be focused on high and medium priority data metrics where the current surveillance systems partially met or did not meet the data requirements and where there was a medium to high feasibility to address the data gaps identified.

There was consensus among the Task Group members that given their high morbidity and mortality in the health care setting, top priority should be given to AMR surveillance of bloodstream infections from Enterococcus species, Enterobacteriaceae species (E. coli and Klebsiella) and Staphylococcus aureus. This recommendation is in keeping with WHO recommendations for AMR surveillanceFootnote 9. While the current national surveillance system partially collects data on organisms with a specific resistance pattern deemed currently most important (e.g., methicillin resistant Staphylococcus aureus or MRSA) it was noted that ideally, the rate of all bloodstream infections caused by these organisms in the health care setting should be collected (with medium feasibility) and in order to monitor for emerging resistance, all available susceptibility patterns should also be identified.

For the two high priority data metrics in the community setting, the Task Group recommended conducting a point‑prevalence community-based study (i.e., every five years) to follow infection rates of C. difficile infection, and community level antibiogram data on an annual basis for susceptibility data for Enterobacteriaceae species (E. coli and Klebsiella) causing genito-urinary infections. In addition, it was recommended that collecting community-based susceptibility data on N.gonorrhoeae was a high priority given its rise in resistance and the fact that the current surveillance system only partially collects this data. However, the feasibility to collect this data more fully was deemed low given logistical and clinical limitations.

Overall, the Task Group also recommended that a review of the national AMR surveillance data requirement priorities occurs on an ongoing basis and as new issues emerge. Further recommendations regarding medium and low priority data requirements can be found in the full report.

The authors gratefully acknowledge the work of all the 2015 CIDSC Antimicrobial Resistance Surveillance Task Group members: