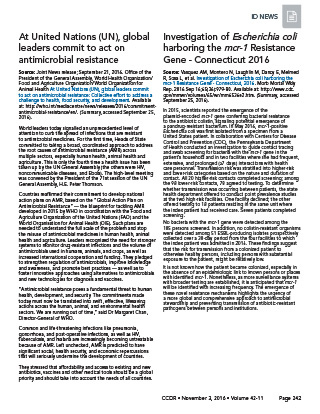 World leaders today signalled an unprecedented level of attention to curb the spread of infections that are resistant to antimicrobial medicines. For the first time, Heads of State committed to taking a broad, coordinated approach to address the root causes of antimicrobial resistance (AMR) across multiple sectors, especially human health, animal health and agriculture. This is only the fourth time a health issue has been taken up by the UN General Assembly (the others were HIV, noncommunicable diseases, and Ebola). The high-level meeting was convened by the President of the 71st session of the UN General Assembly, H.E. Peter Thomson.

Countries reaffirmed their commitment to develop national action plans on AMR, based on the "Global Action Plan on Antimicrobial Resistance" - the blueprint for tackling AMR developed in 2015 by WHO in coordination with the Food and Agriculture Organization of the United Nations (FAO) and the World Organisation for Animal Health (OIE). Such plans are needed to understand the full scale of the problem and stop the misuse of antimicrobial medicines in human health, animal health and agriculture. Leaders recognized the need for stronger systems to monitor drug-resistant infections and the volume of antimicrobials used in humans, animals, and crops, as well as increased international cooperation and funding. They pledged to strengthen regulation of antimicrobials, improve knowledge and awareness, and promote best practices - as well as to foster innovative approaches using alternatives to antimicrobials and new technologies for diagnosis and vaccines.

"Antimicrobial resistance poses a fundamental threat to human health, development, and security. The commitments made today must now be translated into swift, effective, lifesaving actions across the human, animal, and environmental health sectors. We are running out of time," said Dr Margaret Chan, Director-General of WHO.

Common and life-threatening infections like pneumonia, gonorrhoea, and post-operative infections, as well as HIV, tuberculosis, and malaria are increasingly becoming untreatable because of AMR. Left unchecked, AMR is predicted to have significant social, health security, and economic repercussions that will seriously undermine the development of countries.

They stressed that affordability and access to existing and new antibiotics, vaccines and other medical tools should be a global priority and should take into account the needs of all countries.

In 2015, scientists reported the emergence of the plasmid-encoded mcr-1 gene conferring bacterial resistance to the antibiotic colistin, signaling potential emergence of a pandrug-resistant bacterium. In May 2016, mcr-1-positive Escherichia coli was first isolated from a specimen from a United States patient. In collaboration with Centers for Disease Control and Prevention (CDC), the Pennsylvania Department of Health conducted an investigation to guide contact tracing and swab screening for bacteria with the mcr-1 gene in the patient's household and in two facilities where she had frequent, extensive, and prolonged (≥7 days) interactions with health care personnel. Transmission risk was stratified into higher-risk and lower-risk categories based on the nature and duration of contact. All 20 higher-risk contacts completed screening; among the 98 lower-risk contacts, 78 agreed to testing. To determine whether transmission was occurring between patients, the state health department offered to conduct point prevalence studies at the two high-risk facilities. One facility declined; the other offered testing to 18 patients residing in the same unit where the index patient had received care. Seven patients completed screening.

No bacteria with the mcr-1 gene were detected among the 105 persons screened. In addition, no colistin-resistant organisms were detected among 51 ESBL-producing isolates prospectively collected over a 30-day period from the four facilities to which the index patient was admitted in 2016. These findings suggest that the risk for transmission from a colonized patient to otherwise healthy persons, including persons with substantial exposure to the patient, might be relatively low.

It is not known how the patient became colonized, especially in the absence of an epidemiologic link to known persons or places with identified mcr-1. Nonetheless, as more surveillance systems with broader testing are established, it is anticipated that mcr-1 will be identified with increasing frequency. The emergence of these novel resistance mechanisms highlights the urgency of a more global and comprehensive approach to antimicrobial stewardship and preventing transmission of antibiotic-resistant pathogens between persons and institutions.