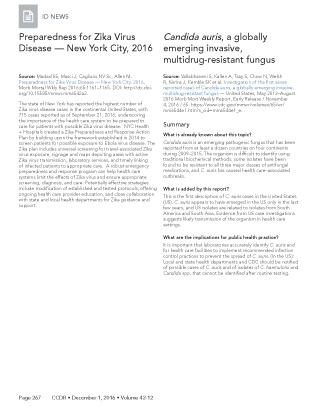 The state of New York has reported the highest number of Zika virus disease cases in the continental United States, with 715 cases reported as of September 21, 2016, underscoring the importance of the health care system to be prepared to care for patients with possible Zika virus disease. NYC Health + Hospitals created a Zika Preparedness and Response Action Plan by building upon the framework established in 2014 to screen patients for possible exposure to Ebola virus disease. The Zika plan includes universal screening for travel-associated Zika virus exposure, signage and maps depicting areas with active Zika virus transmission, laboratory services, and timely linking of infected patients to appropriate care. A robust emergency preparedness and response program can help health care systems limit the effects of Zika virus and ensure appropriate screening, diagnosis, and care. Potentially effective strategies include modification of established and tested protocols, offering ongoing health care provider education, and close collaboration with state and local health departments for Zika guidance and support.

Candida auris is an emerging pathogenic fungus that has been reported from at least a dozen countries on four continents during 2009–2015. The organism is difficult to identify using traditional biochemical methods, some isolates have been found to be resistant to all three major classes of antifungal medications, and C. auris has caused health care–associated outbreaks.

This is the first description of C. auris cases in the United States (US). C. auris appears to have emerged in the US only in the last few years, and US isolates are related to isolates from South America and South Asia. Evidence from US case investigations suggests likely transmission of the organism in health care settings.

It is important that laboratories accurately identify C. auris and for health care facilities to implement recommended infection control practices to prevent the spread of C. auris. (In the US): Local and state health departments and CDC should be notified of possible cases of C. auris and of isolates of C. haemulonii and Candida spp. that cannot be identified after routine testing.