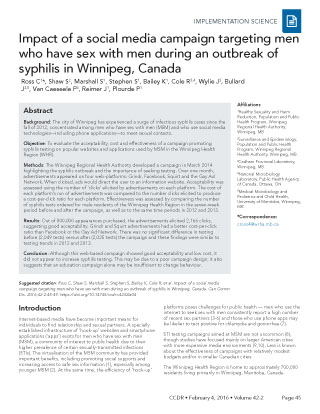 Impact of a social media campaign targeting men who have sex with men during an outbreak of syphilis in Winnipeg, Canada

Background: The city of Winnipeg has experienced a surge of infectious syphilis cases since the fall of 2012, concentrated among men who have sex with men (MSM) and who use social media technologies--including phone applications--to meet sexual contacts.

Objective: To evaluate the acceptability, cost and effectiveness of a campaign promoting syphilis testing on popular websites and applications used by MSM in the Winnipeg Health Region.

Methods: The Winnipeg Regional Health Authority developed a campaign in March 2014 highlighting the syphilis outbreak and the importance of seeking testing. Over one month, advertisements appeared on four web-platforms: Grindr, Facebook, Squirt and the Gay Ad Network. When clicked, ads would direct the user to an information website. Acceptability was assessed using the number of 'clicks' elicited by advertisements on each platform. The cost of each platform's run of advertisements was compared to the number clicks elicited to produce a cost-per-click ratio for each platform. Effectiveness was assessed by comparing the number of syphilis tests ordered for male residents of the Winnipeg Health Region in the seven-week period before and after the campaign, as well as to the same time periods in 2012 and 2013.

Results: Out of 800,000 appearances purchased, the advertisements elicited 2,166 clicks, suggesting good acceptability. Grindr and Squirt advertisements had a better cost-per-click ratio than Facebook or the Gay Ad Network. There was no significant difference in testing before (2,049 tests) versus after (2,025 tests) the campaign and these findings were similar to testing trends in 2012 and 2013.

Conclusion: Although this web-based campaign showed good acceptability and low cost, it did not appear to increase syphilis testing. This may be due to a poor campaign design; it also suggests that an education campaign alone may be insufficient to change behaviour.

Internet-based media have become important means for individuals to find relationship and sexual partners. A specially established infrastructure of 'hook-up' websites and smartphone applications ('apps') exists for men who have sex with men (MSM), a community of interest to public health due to their higher prevalence of certain sexually-transmitted infections (STIs). The virtualisation of the MSM community has provided important benefits, including promoting social supports and increasing access to safe sex information Footnote 1 especially among younger MSM Footnote 2. At the same time, the efficiency of 'hook-up' platforms poses challenges for public health--men who use the Internet to seek sex with men consistently report a high number of recent sex partners Footnote 3Footnote 4Footnote 5Footnote 6 and those who use phone apps may be likelier to test positive for chlamydia and gonorrhea Footnote 7.

STI testing campaigns aimed at MSM are not uncommon Footnote 8 though studies have focused mainly on larger American cities with more expensive media environments Footnote 9Footnote 10. Less is known about the effectiveness of campaigns with relatively modest budgets and/or in smaller Canadian cities.

The Winnipeg Health Region is home to approximately 700,000 residents living primarily in Winnipeg, Manitoba, Canada. Since the late 1990s, aside from two brief outbreaks in 2003 and 2007 Footnote 11Footnote 12 syphilis rates have remained relatively low in this region. This changed in the fall of 2012, when an outbreak was declared following a surge in the number of reported infectious syphilis cases (Winnipeg Regional Health Authority, unpublished data). Two trends were clearly observable. First, the outbreak was concentrated in men, but widely spread in terms of both geographic location within the age group and the region. Second, the majority reported meeting partners through websites and apps. Faced with this, the Winnipeg Regional Health Authority (the authority overseeing care in this region) sought to design a relatively inexpensive campaign promoting syphilis testing among local MSM. In March 2014, advertisements encouraging syphilis testing were placed on several platforms, eliciting 'clicks' to a website about syphilis. The objective of this study was to measure the acceptability, cost and effectiveness of the advertisement campaign.

Increased testing was felt to be a more realistic goal for a time-limited campaign rather than seeking more intensive behaviour change such as consistent condom use Footnote 13. A simple ad was developed by a local company, designed to create a sense of urgency about syphilis testing without stigmatizing or sex-negative messaging (Figure 1). Clicks on the ads would direct the user to a webpage featuring information about syphilis rates in Winnipeg and locations where testing could be sought. Including the design costs and media placement, the entire campaign cost approximately CAD 6,000. All dollar figures are in 2014 Canadian dollars.

Ads were hosted on four online media platforms over the month of March 2014: the Gay Ad Network, Facebook, Grindr and Squirt. The Gay Ad Network places banner ads on websites geo-targeted to gay men in a particular city or region. Although MSM use Facebook primarily to connect with face-to-face friends Footnote 2 it was chosen because of its ubiquity and ability to target ads based on users' profiles and geography. Ads on Grindr, a smartphone app for MSM that uses geolocation technology to find other users organized by physical proximity, appeared as banners across the bottom of a user's screen. Finally, Squirt is a (primarily) website-based platform wherein users create profiles and send messages to others based on their profile information. Squirt was chosen due to its particular popularity in Winnipeg. There were two media options used with Squirt: website banner ads and an 'eblast' (a private message sent to all users' inboxes). The campaign launch was staggered due to the platforms' differing advertising cycles, but all ads were circulating by mid-March 2014 and all were wrapped up by March 31.

The acceptability of the campaign was defined as the extent to which users were interested enough in the ad to click on it for more information. Platforms reported the number of 'clicks' the ads received during the campaign period, which could be compared to the total number of times the ads appeared to users of that platform ('appearances').

The cost of each platform's run of ads was compared to the number of clicks elicited to determine a cost-per-click ratio for each platform.

The effectiveness of the campaign was assessed by determining whether or not there was an increase in syphilis testing among men in Winnipeg following the campaign. This was measured using data supplied by Cadham Provincial Laboratory, the public health laboratory in Manitoba that performs all of the syphilis serology testing for the province. The data included all syphilis tests performed among male residents of the Winnipeg Health Region from 2012 to the end of April 2014, based on the tester's postal code at the time of testing. The number of tests ordered in the seven-week period prior to the launch of the first ads (i.e., March 7, 2014) was compared to the number of tests ordered in the seven-week period after the first ads appeared. In addition, the number of syphilis tests ordered in the same time periods in 2012 and 2013 were examined for comparison. The association between age group (those under the age of 40, compared to those 40 years and over) and the number of tests was also assessed. Multivariable Poisson regression models were used to assess statistical significance. Stata 13 (StataCorp; College Station, Texas) was used for all analyses. Relative rates (RR) and 95% confidence intervals (CI) were reported.

Over a period of about one month, campaign ads appeared approximately 800,000 times across all platforms and these appearances elicited 2,166 clicks to the information website. The number of clicks elicited by each platform is presented in Table 1, alongside the number of ad appearances and their cost. Although the Squirt 'eblast' was the most effective at eliciting clicks per thousand appearances, Grindr was by far the most successful in terms of the raw number of clicks elicited. Grindr ads were clicked 1,840 times, accounting for 85% of all campaign clicks, despite hosting only 50% of ad appearances. Clicks on Grindr were also the least expensive: for a CAD 2,000 investment, the 1,840 clicks amounted to $1.09/click, followed closely by the Squirt banner ads, at $1.12/click. This suggests that the 'hook-up' platforms (Grindr and Squirt) were both the most acceptable and had the best cost-per-click ratio.

No difference in syphilis testing was observed in the post-campaign period. A total of 2,049 syphilis tests were performed on male residents in the Winnipeg Health Region in the seven-week period prior to the ad campaign. In comparison, 2,025 tests were performed in the post-campaign period. This slight dip is similar to trends observed in the two years previous to the campaign (Table 2) and so appears to be seasonal. The vast majority of tests (70%) were performed in those under the age of 40 in both time periods.

Without affecting overall testing numbers, advertising might still have resulted in more testing among MSM, in turn generating new cases. However, there was no significant change in the number of new reactive syphilis serologic tests detected through testing of residents in the seven-week pre- and post-campaign periods (35 and 37 reactive tests, respectively) and no increase in the number of infectious syphilis cases diagnosed (11 cases pre- and nine cases post-campaign; Winnipeg Regional Health Authority, unpublished data on file with authors).

In a one-month period, the syphilis testing promotional campaign elicited over 2,100 clicks from the target group of MSM for an investment of less than CAD 6,000. Both the Squirt and Grindr banners were more cost-effective, at approximately $1/click. However, no relationship was found between the campaign and syphilis testing rates.

The chief strength of the study is that it had access to testing data for the entire Winnipeg Health Region over multiple years, due to the centralisation of all syphilis testing within the provincial laboratory. At the same time, other aspects of the study methodology may have obscured the intervention's effects. The seven-week observation window may have been insufficient to pick up testing that occurred in response to the campaign. The laboratory data also included little about the men seeking testing other than their gender and place of residence (i.e., the inclusion criteria). It is therefore not known what proportion were MSM, obscuring whether or not this (smaller) group may have indeed sought increased testing. Future studies could consider complementary methodologies to assess changes that may be masked by the target group's small numbers. For example, the extent to which the campaign may have increased MSM community awareness of the outbreak was not evaluated.

Several intervention factors may also explain the failure to impact testing rates. First, the ads may simply not have been effective for the audience due to aesthetic flaws or insufficient investment. Studies have documented that investment may be a crucial determinant of success, with intensive, high-coverage safer sex campaigns outperforming more inexpensive ones Footnote 9Footnote 10Footnote 14. Second, some target audience members may have missed seeing the ads because they do not have access to, or choose not to use, new technologies. Third, education campaigns do not necessarily address practical barriers to behaviour change which may have impacted some target audience members Footnote 15.

Finally, assumptions underlying the intervention may have been incorrect. Testing behaviours among MSM may already have been maximized, making the promotion of testing an inappropriate goal. The target audience may also have been too broad: while 'hook-up' websites and smartphone apps are increasingly ubiquitous among MSM, syphilis (conversely) remains relatively rare and affected by social and structural determinants Footnote 16. Emerging literature is pointing to strategies that ignore platforms or venues entirely, in favour of promoting post diagnosis testing or increasing the testing frequency of MSM who already seek regular testing Footnote 17Footnote 18.

Media campaigns are one public health strategy used to raise awareness among populations at increased susceptibility of a health risk. Information alone may not be enough to change behaviour. Future research should assess the combination of education campaigns with other targeted and upstream public health tactics tailored to the specific needs of the target population.

We thank the reviewers for their many helpful comments.

The in-kind support provided by the authors' organizations is gratefully acknowledged.