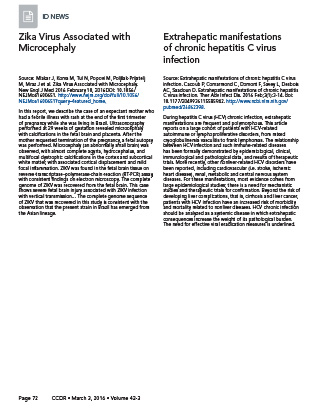 In this report, we describe the case of an expectant mother who had a febrile illness with rash at the end of the first trimester of pregnancy while she was living in Brazil. Ultrasonography performed at 29 weeks of gestation revealed microcephaly with calcifications in the fetal brain and placenta. After the mother requested termination of the pregnancy, a fetal autopsy was performed. Microcephaly (an abnormally small brain) was observed, with almost complete agyria, hydrocephalus, and multifocal dystrophic calcifications in the cortex and subcortical white matter, with associated cortical displacement and mild focal inflammation. ZIKV was found in the fetal brain tissue on reverse-transcriptase–polymerase-chain-reaction (RT-PCR) assay, with consistent findings on electron microscopy. The complete genome of ZIKV was recovered from the fetal brain. This case shows severe fetal brain injury associated with ZIKV infection with vertical transmission… The complete genome sequence of ZIKV that was recovered in this study is consistent with the observation that the present strain in Brazil has emerged from the Asian lineage.

During hepatitis C virus (HCV) chronic infection, extrahepatic manifestations are frequent and polymorphous. This article reports on a large cohort of patients with HCV-related autoimmune or lymphoproliferative disorders, from mixed cryoglobulinemia vasculitis to frank lymphomas. The relationship between HCV infection and such immune-related diseases has been formally demonstrated by epidemiological, clinical, immunological and pathological data, and results of therapeutic trials. More recently, other nonliver-related HCV disorders have been reported, including cardiovascular (i.e. stroke, ischemic heart disease), renal, metabolic and central nervous system diseases. For these manifestations, most evidence comes from large epidemiological studies; there is a need for mechanistic studies and therapeutic trials for confirmation. Beyond the risk of developing liver complications, that is, cirrhosis and liver cancer, patients with HCV infection have an increased risk of morbidity and mortality related to nonliver diseases. HCV chronic infection should be analyzed as a systemic disease in which extrahepatic consequences increase the weight of its pathological burden. The need for effective viral eradication measures is underlined.