Needs of people living with and without HIV in Canada 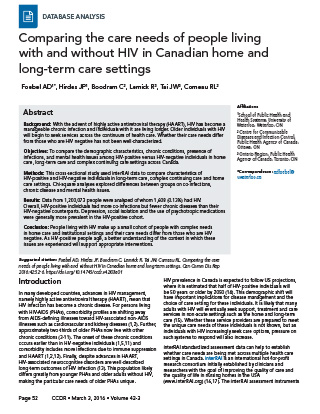 Background: With the advent of highly active antiretroviral therapy (HAART), HIV has become a manageable chronic infection and individuals with it are living longer. Older individuals with HIV will begin to seek services across the continuum of health care. Whether their care needs differ from those who are HIV negative has not been well-characterized.

Results: Data from 1,200,073 people were analyzed of whom 1,608 (0.13%) had HIV. Overall, HIV-positive individuals had more co-infections but fewer chronic diseases than their HIV-negative counterparts. Depression, social isolation and the use of psychotropic medications were generally more prevalent in the HIV-positive cohort.

Conclusion: People living with HIV make up a small cohort of people with complex needs in home care and institutional settings and their care needs differ from those who are HIV negative. As HIV-positive people age, a better understanding of the context in which these issues are experienced will support appropriate interventions.

HIV prevalence in Canada is expected to follow US projections, where it is estimated that half of HIV-positive individuals will be 50 years or older by 2050 Footnote 14. This demographic shift will have important implications for disease management and the choice of care setting for these individuals. It is likely that many adults with HIV will eventually seek support, treatment and care services in non-acute settings such as the home and long-term care Footnote 15. Whether these service providers are prepared to meet the unique care needs of these individuals is not known, but as individuals with HIV increasingly seek care options, pressure on such systems to respond will also increase.

interRAI standardized assessment data can help to establish whether care needs are being met across multiple health care settings in Canada. interRAI is an international not-for-profit research consortium initially established by clinicians and researchers with the goal of improving the quality of care and the quality of life in nursing homes in the USA (www.interRAI.org) Footnote 16Footnote 17. The interRAI assessment instruments were designed to provide a common, integrated approach to standardized assessment of vulnerable populations with complex care needs, such as those requiring home care and nursing home services Footnote 16Footnote 18Footnote 19Footnote 20. The minimum data set version 2.0 (MDS 2.0) and interRAI Home Care (RAI-HC) instruments have been validated for use in the home care and long‑term care settings, respectively Footnote 19Footnote 20Footnote 21. Although these instruments have been in use in Canada since 1996 and 2002, respectively, they have not been used to track the health care needs of HIV-positive individuals.

Currently, there is little evidence about the needs of HIV-positive individuals in home care or institutional environments. The objective of this study was to compare the care needs of people living with and without HIV in Canadian home care and long-term care settings, with a focus on co-infections, comorbidities and mental health issues.

Home care (HC):
Services that include a mix of personal support, home nursing and some rehabilitative care that are provided in a client’s home. Note: Long-stay clients are expected to be using services for 60 days or more.
Long-term care (LTC):
Private, public and charitable nursing homes that provide regulated care to people with stable medical conditions who require 24-hour care.
Complex continuing care (CCC):
Hospitals or units in post-acute hospital settings that provide care to individuals with more severe impairments or more medically complex conditions and/or mental health needs than those who typically cared for in nursing homes. Note: These facilities are only available in Ontario and Manitoba.

Data from two Canadian interRAI assessment instruments were used to capture information about these three settings. Data for the home care sample were collected using the interRAI home care (RAI-HC) instrument and data for the institutionalized samples (in LTC and CCC) came from the interRAI minimum data set version 2.0 (MDS 2.0) instrument. Data from these instruments were available from two national repositories managed by the Canadian Institute for Health Information (CIHI), the Home Care Reporting System (HCRS) and the Continuing Care Reporting System (CCRS) Footnote 22Footnote 23. Data-sharing agreements between CIHI, interRAI and the University of Waterloo allowed access to these data for this research. RAI-HC data were collected from 2002–2014 for all long-stay home care clients. For the LTC and CCC populations, MDS 2.0 assessments were collected between 1996 and 2014.

All individuals in these settings were included in the study provided they had a completed interRAI assessment. RAI-HC assessments from hospital settings were excluded as those assessments determine LTC eligibility and not home care planning.

interRAI instruments contain a comprehensive set of core items to describe client demographics and clinical characteristics that assist with care planning. Demographic information about age, sex and marital status (where “married” indicates married or common-law partners, including same-sex partners) are available from all interRAI records.

The measures included in this study comprised common chronic conditions associated with aging and conditions for which PHAs may be at higher risk (including infections and mental health comorbidities). Most data were available from both the RAI-HC and MDS 2.0 instruments. In both instruments, checklists of disease diagnoses are available for all of the chronic diseases (heart failure, emphysema/chronic obstructive pulmonary disease [COPD], diabetes, cancer, any psychiatric disorder and other cardiovascular diseases) and infectious diseases (pneumonia, tuberculosis and urinary tract infections [UTI]) assessed in this study. However, some infectious diseases (antibiotic-resistant infections, cellulitis, Clostridium difficile infection, conjunctivitis, respiratory infections, septicemia, sexually transmitted infections [STIs] and viral hepatitis) were only available from checklist items available on the MDS 2.0 and could not be measured in the home care sample.

For mental health symptoms (including anxiety, aggressive behaviour, hallucinations and social isolation), specific items record the presence or absence of the symptom on both the RAI-HC and the MDS 2.0. Depressive symptoms were examined using the Depression Rating Scale embedded within both interRAI assessment instruments; a score of three or higher on this scale indicated possible depression Footnote 24. The instruments also record the use of any psychotropic medications (antipsychotics, antidepressants, anxiolytics and sedatives) in the previous seven days.

Differences in characteristics between HIV-positive and HIV-negative individuals in each care setting were tested using chi-square tests (significance level p < 0.05) for all variables of interest. Age was collapsed into six categories to differentiate very young as well as very old individuals. All analyses were carried out using SAS version 9.4 (SAS Institute Inc., Cary, North Carolina).

Mental health issues were generally common and similar among LTC residents with and without HIV (Table 2). In CCC and HC, PHA had slightly higher rates of anxiety symptoms but these were not statistically significant. While aggressive behaviour was more prevalent in the HIV-positive cohort in CCC (33.6% vs. 27.1%), it was less prevalent in the HIV-positive cohort in home care (7.9% vs. 9.9%). The HIV-positive group experienced significantly more social isolation than the HIV-negative group in the CCC and home care settings (p < 0.0001). Finally, across all care settings, rates of psychotropic drug use were higher in the HIV-positive versus the HIV-negative groups, but were not statistically significant for antidepressants and sedatives in the CCC setting.

This is the largest study to date of PHAs living in care settings. It included 1,608 PHAs from across Canada and confirms work done in an earlier Ontario cohort study Footnote 26. Compared to their counterparts without HIV, older PHAs had more co-infections, fewer chronic diseases and a similar mental health profile, although they tended to use more psychotropic medications. With the exception of UTIs, co-infections were more common among PHAs in all care settings, consistent with previous research Footnote 27Footnote 28. The rates of comorbid diseases varied among PHAs, with lower overall prevalence than reported in earlier work Footnote 3Footnote 4Footnote 5Footnote 6Footnote 7Footnote 8Footnote 9Footnote 10Footnote 11. The younger age of PHA groups in this study may explain these findings, but we were not able to confirm this as the PHA sample size was not large enough to stratify by age.

This study also confirms the high prevalence of psychiatric diagnoses, depression and anxiety symptoms among older PHAs Footnote 2Footnote 7Footnote 8Footnote 11Footnote 29Footnote 30Footnote 31. However, the prevalences of anxiety disorders and hallucinations or delusions were also quite high among the HIV-negative cohorts in these care settings. The prevalence of depression neared 25% among PHAs, which is slightly higher than rates of 21% in US nursing homes Footnote 28Footnote 32.

The substantially higher rates of psychotropic medication use by HIV-positive groups appear to be a novel finding. Since this is a descriptive dataset, it is not possible to speculate on the appropriateness of this use. Rates of social isolation were higher among PHAs, especially in home care. Social isolation, known to be common among older PHAs, increases with age Footnote 3 and can lead to loneliness and depression Footnote 2.

Key strengths of this study are its inclusion of large samples from multiple sites and data from across Canada. These findings can be considered representative of the three care settings that were explored, as interRAI data are complete where mandated. Finally, these data allowed characterization of the specific needs of older PHAs as they begin to navigate care options in older age.

Nevertheless, the over-representation of data from Ontario and the variability of interRAI uptake across Canada are important limitations. Also, these findings cannot be compared to PHAs who do not access such care or who access AIDS/HIV-specific care from other care settings. Finally, this cross-sectional work could not determine causal relationships.

As the population ages, the demand for LTC to support, treat and care for older PHAs will increase. Failure to address the unique care needs of this group may lead to worse outcomes and increase the strain on health systems Footnote 33. The higher prevalence of psychotropic medication use among HIV-positive groups may be worthy of more attention, especially given the debate over the appropriateness of these therapies in general Footnote 34Footnote 35. Monitoring of these trends is indicated.

Future research using a comprehensive national sample of older PHAs would provide information to regions excluded in the current study. Exploring policy options designed to improve both care and access in these settings should also be a priority, particularly in the home care setting where improved services could delay or prevent hospitalizations and LTC admissions.

More PHAs are living longer and experiencing HIV in the context of aging. Our findings suggest that PHAs in home care, LTC and CCC settings have major needs with respect to the management of co-infections, comorbidity and mental health issues that set them apart from their HIV-negative counterparts.

Drs. Foebel and Hirdes received funding from the Public Health Agency of Canada [contract # 4500326437] to carry out a larger research project on which this manuscript is based.

All authors confirm that they have no conflicts of interest.

Carpenter GI. Accuracy, validity and reliability in assessment and in evaluation of services for older people: the role of the interRAI MDS assessment system. Age Ageing. 2006;35(4):327-9.

Gough K, Karapita S. Facing the future together: An innovative response to the urgent HIV/AIDS crisis in Toronto. Toronto (ON): Casey House, 2011.