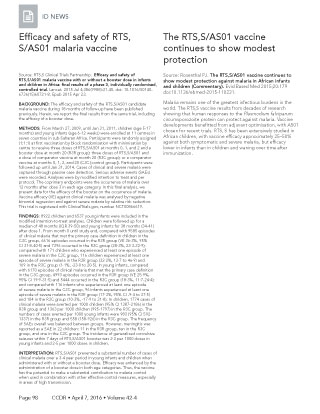 BACKGROUND: The efficacy and safety of the RTS,S/AS01 candidate malaria vaccine during 18 months of follow-up have been published previously. Herein, we report the final results from the same trial, including the efficacy of a booster dose.

METHODS: From March 27, 2009, until Jan 31, 2011, children (age 5-17 months) and young infants (age 6-12 weeks) were enrolled at 11 centres in seven countries in sub-Saharan Africa. Participants were randomly assigned (1:1:1) at first vaccination by block randomisation with minimisation by centre to receive three doses of RTS,S/AS01 at months 0, 1, and 2 and a booster dose at month 20 (R3R group); three doses of RTS,S/AS01 and a dose of comparator vaccine at month 20 (R3C group); or a comparator vaccine at months 0, 1, 2, and 20 (C3C [control group]). Participants were followed up until Jan 31, 2014. Cases of clinical and severe malaria were captured through passive case detection. Serious adverse events (SAEs) were recorded. Analyses were by modified intention to treat and per protocol. The coprimary endpoints were the occurrence of malaria over 12 months after dose 3 in each age category. In this final analysis, we present data for the efficacy of the booster on the occurrence of malaria. Vaccine efficacy (VE) against clinical malaria was analysed by negative binomial regression and against severe malaria by relative risk reduction. This trial is registered with ClinicalTrials.gov, number NCT00866619.

INTERPRETATION: RTS,S/AS01 prevented a substantial number of cases of clinical malaria over a 3-4 year period in young infants and children when administered with or without a booster dose. Efficacy was enhanced by the administration of a booster dose in both age categories. Thus, the vaccine has the potential to make a substantial contribution to malaria control when used in combination with other effective control measures, especially in areas of high transmission.

Malaria remains one of the greatest infectious burdens in the world. The RTS,S vaccine results from decades of research showing that human responses to the Plasmodium falciparum circumsporozoite protein can protect against malaria. Vaccine developments benefitted from adjuvant optimisation, with AS01 chosen for recent trials. RTS,S has been extensively studied in African children, with vaccine efficacy approximately 25–50% against both symptomatic and severe malaria, but efficacy lower in infants than in children and waning over time after immunization.

BACKGROUND/OBJECTIVES: Anthrax vaccine adsorbed (AVA, BioThrax(®)) is recommended for post-exposure prophylaxis administration for the US population in response to large-scale Bacillus anthracis spore exposure. However, no information exists on AVA use in children and ethical barriers exist to performing pre-event pediatric AVA studies. A Presidential Ethics Commission proposed a potential pathway for such studies utilizing an age de-escalation process comparing safety and immunogenicity data from 18 to 20 year-olds to older adults and if acceptable proceeding to evaluations in younger adolescents. We conducted exploratory summary re-analyses of existing databases from 18 to 20 year-olds (n=74) compared to adults aged 21 to 29 years (n=243) who participated in four previous US government funded AVA studies.

RESULTS: Rates of any elicited local AEs were not significantly different between younger and older age groups for local events (79.2% vs. 83.8%, P=0.120) or systemic events (45.4% vs. 50.5%, P=0.188). Robust and similar proportions of seroresponses to vaccination were observed in both age groups.

CONCLUSIONS: AVA was safe and immunogenic in 18 to 20 year-olds compared to 21 to 29 year-olds. These results provide initial information to anthrax and pediatric specialists if AVA studies in adolescents are required.

The ideal dengue vaccine will provide protection against all serotypes of dengue virus and will be economical and uncomplicated in its administration. To determine the ability of a single dose of live-attenuated tetravalent dengue vaccine TV003 to induce a suitable neutralizing antibody response, a placebo-controlled clinical trial was performed in 48 healthy adults who received two doses of vaccine or placebo administered 12 months apart. Evaluation of safety, vaccine viremia, and neutralizing antibody response after each dose indicated that the first dose of vaccine was capable of preventing infection with the second dose, thus indicating that multiple doses are unnecessary.